Cause of Shame for UNO! “Indian Army” 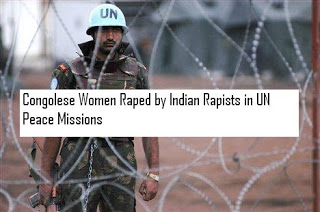 The UNO Peace Missions was started in 1948 during the Arab-Israel war when Arabs and Israel both got ready for the peace and wanted UNO to deploy a peace force in the area so that the aggression from any party may not form the war once again. In this regard UNO requested the member states to send the troops who had to fulfill their duties under the command of UNO. This force was known as United Nations Truce Supervision Organization (UNTSO), however, when during the cold war between USA and Soviet Union world was divided into two parts; disputes and tension was fueled in between many states resulting in the increase of UN peace missions. Even the disintegration of Soviet Union could not decrease these responsibilities thus increasing the demand for manpower for UN peace missions.
Due to these increased demands India was also included in the manpower providing countries which resulted in the increase in the complaints from the countries where Indian soldiers were deployed due to the violations of discipline and moral values which resulted in shame for UNO. Indian soldiers discipline violations included smuggling of illegal weapons, rape of local women etc. The incident of rape of women in the hands of Indian soldiers included in Peace Mission was highlighted in 2010 when unmarried single mothers from Congo visited the UN office in Darla. They claimed that these are the children of Indian soldiers and they are unable to support these children. The face, figure of these children was different from African children and resembled Indians. On the investigations by UNO these children were proved to be children of Indian soldiers. On further investigations, 51 out of the wedlock children were found while the women raped by Indian soldiers was in hundreds who were lured into sexual relations for food, dresses and Indian made make-up products. Indian soldiers were aware that these women are powerless.
As the civil war had destroyed the whole society and system, thus it was the duty of the UNO to protect the rights of these women. In order to fulfill this responsibility UNO had sent Peace Mission in the country. The UNO Centre in Congo took this incident seriously and informed UN Headquarters in New York. The reports of gang rape of a woman from Pretoria (tourist) in the hands of Indian Lt. Colonel and 2 Majors from Plettenberg Bay of Central Africa in 2008 were still afresh in the UN HQ. These Indians were arrested and put into jail by local Police. UNO arranged their release and sent them back to India. India had to apologize in writing from UNO.
Now India had to face this allegation of out of wedlock children. The Commander of Indian troops in Congo laid the allegation over Pakistani soldiers in order to save his soldiers. On this UNO ordered to conduct DNA tests. The DNA tests proved that all the illegitimate children belonged to officers and soldiers of 6th Sikh Battalion of India deployed in Congo in 2008 along with the ranks and identity of the Indian soldiers. This included 12 officers and 39 soldiers and non-commissioned officers (NCOs). Indian army was ordered to start trial against the culprits and punish Indian soldiers. However, killed the event in the name of conducting inquiry by itself while on the other hand the credibility of India was at stake.


In August 2010, when a contingent of Indian army was to be sent on the UNO Mission, UNO denied to accept them in the UN Peace Mission until India punishes those soldiers involved in the mutilation of Congolese women. UNO further made it clear to the India that unless these culprits are not punished, not only Indian contingents would not be accepted in the UN Peace Missions and the already serving Indian soldiers will be returned back as well, while UNO will be forced to take action against Indian soldiers itself.
It was not possible for India to forego the dollars received from UNO for peace missions; thus UNO’s worked wonders and India established a commission commanded by a Brigadier in order to punish officers and soldiers of 6th Sikh Battalion whose name and identities were provided by UNO. Still this process was going on that epidemic of Cholera broke in the Haiti due to the Indian soldiers present in Haiti. During the investigations it was proved that this epidemic broke out due to the two Indian soldiers in the peace mission who were not vaccinated / inoculated before visiting Haiti. According to the reports more than 10,000 deaths have been reported due to Cholera.
Haiti govt. blames UNO for this epidemic. Ex-Secretary General of UNO Ban Ki Moon has to apologize from Haiti govt. UNO was busy in controlling the epidemic while last year Indian govt. sent another contingent Assam Rifles of Indian army without inoculation / vaccination wile UNO was provided with the certificates that Indian soldiers were vaccinated. UNO has termed all these certificates as fake and asked explanation from Indian govt. New Delhi is of the view that Certificates are genuine. The soldiers of Assam Rifles in Haiti are of the view that they have not been vaccinated. Due to this UNO had to vaccinate Indian soldiers. Investigations are going on in this regard.
UNO should realize that India is not ready to accept the guidelines and international law. India considers herself as exempt from all rules and regulations of UNO. If UNO had forced India to act upon the resolutions passed related to Indian Held Kashmir, punished Indian soldiers for war crimes and rapes of Kashmiri women than Indian soldiers would had not became cause of shame for UNO in Congo, Sudan, Liberia, Haiti or other areas under the control of UNO Peace Missions…