Few days ago on 20th November 2016, Pakistan demanded UNO to hold investigations in the deaths of 4 innocent children as the result of unprovoked Indian shelling over LoC. After submission of complaint to UNO on 24th November 2016, Indian army targeted a passenger bus and an ambulance in the Neelam Valley taking lives of 10 persons on spot. Afterwards, one out 15 injured succumbed to injuries in the hospital. Whole nation is sad over this tragedy that what the Indian nefarious designs are and why India is targeting unarmed Pakistanis. Is the reason behind such cowardly firing over civilians the freedom movement in Indian Held Kashmir which India is unable to control and suppress? Or India is taking such cowardly steps on successful completion of CPEC?


Modi is notorious for his revengeful nature in India who can cross all limits to achieve what he wants. This is not a secret that a group of industrialists paved way for Modi to be elected as Indian Prime Minister through heavy funding. Extremist Hindus supported Modi due to his hatred and enmity against Pakistan due to his link with Rashtriya Sewak Singh (RSS) and massacre of Muslims in Gujarat. Modi decided to play heinous and hypocrite game with Pakistan after being elected as PM.  On the one hand he appointed Ajeet Kumar Dowal a notorious handler of terrorists as his Security Advisor in order to continue terrorism in Pakistan via Afghanistan. Dowal was retired as Chief of Indian Secret agency in 2014. Dowal was the master mind behind devastation of Babri Mosque, genocide of Muslim in Gujarat, planning to kill Dawood Ibraheem in the marriage of his daughter through two snipers and hijacking of Indian passenger plane in December 1999 from Katmandu, Nepal in order to defame Pakistan and ISI. Hijackers took aeroplane to Kabul where they demanded release of Azhar Masood and two others. However, Dowal failed to kill Dawood Ibraheem because he did not attend marriage of his daughter.


Similarly, the script of dramatic attack over Indian Parliament in 2001 and hanging of innocent Afzal Guru from Indian Held Kashmir was written by Ajeet Kumar Dowal as well. However, the ground reality is that the Ghost of terrorism created in Pakistan by Dowal is taking its last breathes as a result of successful Operation Zarb-e-Azb and condition of Passport for movement across Pak-Afghan border.
Modi decided to handle the second front himself in which he increased links with the Pakistani leadership in order to facilitate his trading and industrialist supporter like Dheru Bhai Ambani and Lakshmi Narain Mittal etc. On return from Kabul, Modi’s stay at Lahore in December 2015 and private meeting with Pakistani PM was series of this chain. Modi was sure that he will be successful in making the deal for trade route for movement of Indian goods via Wahga border to Afghanistan. This trade route would have been used to transport Coal from Afghanistan to India for Steel Mills of Mital family and goods of Indian industry to Afghanistan. 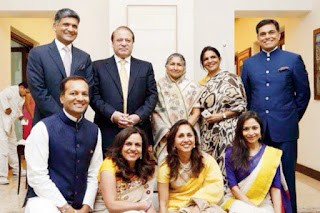 Pakistan’s political elite was also waiting for suitable time to establish trade between India-Pakistan and have been struggling for it since Zardari reign. Indian sponsored Pakistani intellectuals were also repeating the same thing that Kashmir Dispute should be put aside and friendly trade links should be established between India and Pakistan; this will pave way for solution of Kashmir dispute as well. Modi left Lahore with great hopes. Modi’s sudden visit to Lahore raised suspicions in Pakistan. Because Modi’s speech against Pakistan and Pak-army on the eve of opening ceremony of Indian constructed Afghan Parliament have reached Pakistan before arrival of Modi. Pakistani public was shocked that Modi can visit Pakistan right after such a hateful and propagandist speech against Pakistan? They were also shocked over their rulers who did not feel any need to discuss Modi’s threatful and hatred speech against Pakistan. These concerns of Pakistani public became hurdle in the Indian access to Afghanistan via Wahga border.

How can Pakistani public allow India to transport goods from Pakistan while India continues conspiracies to disintegrate Pakistan through her armed interference in Balochistan, killing Pakistanis through terrorism and unprovoked firing, not only threaten but practically stop water of Pakistani rivers? This rejection of Indian road access to Afghanistan for trade has made Hindu India psycho and she had started limited war against Pakistan over Line of Control (LoC) in which unarmed civilians are being targeted. This unprovoked firing by Hindu troops would lead to war that will not remain confined to LoC only but whole region would affected by it…