Indian Held Kashmir where grave violations of basic human rights are going on since last 5 months and created concerns over international level; including General Secretary of UNO, heads of different states have also expressed their concerns over the brutalities of Hindu army. Unchecked use of pellet guns has raised protests within India. Thousands of Kashmiris have become target of cartridges of shotgun used in pellet gun. The number of those who lost their eyes for ever due to these pellets of cartridges used for hunting also reaches in thousands. Number of those arrested without any record or forced disappearances by Hindu forces has also crossed thousand. Their relatives do not know any thing about them. Astonishingly, Human Rights Commission of Asia is blind to Kashmir and genocide of Rohingya Muslims of Myanmar just because they are Muslims or International powers have no interests linked with them.
So called Human Rights Commission is only concerned about Balochistan. They have concerns over the National Action Plan chalked out by Pakistan government to crush the terrorists funded by anti-Pakistan states especially India. They claim that NAP is the plan for genocide of Baloch. According to this so called biased commission Baloch are being kidnapped or state is committing atrocities to suppress their voice. Asian Human Rights Commission blind to the Hindu war crimes have alleged Pakistan army and Federal govt. for preparing a big military operation in the province. It has alleged govt. and army for supporting banned religious organizations. Asian Human Rights Commission (AHRC) has the concerns that Pakistan army is involved in the operations against locals in Balochistan in the name of protection of CPEC. AHRC considers only those Indian terrorists as local Baloch people according to the guidelines issued by Hindu terrorist organization RAW.
In contrast to the allegations of AHRC if we look at the situation in Balochistan; there is local provincial democratic govt. The situation of law and order can be imagined from the fact that when other provinces were avoiding local bodies elections, Balochistan was the first province to peacefully hold the local bodies elections and make them functional as well. This is also a bitter reality that after KPK Balochistan was the second province of Pakistan that was being used as strong hold by Indian and foreign supported terrorists. Just only in the last four months on 8th August 2016 famous lawyers were targeted by the suicide bomb blast at the Quetta Hospital, on 24 October 2016 terrorists entered into the Police training academy killing 71 policemen and injuring 117 Police personnel. On 13 November 2016 at the shrine of Shah Noorani the suicide bomb blast claimed 60 lives.


The responsibilities of these attacks were accepted by different elements with different terrorist outfits names who have been using Afghanistan as their operation headquarters for terrorism in Balochistan and Pakistan. This is not possible without Afghan govt, Indian and American support. By the permission of USA, India is utilizing her more than one dozen consulates in Afghanistan as launching pads of terrorists in Balochistan. This terrorism plan of india was started after few months of American invasion in Afghanistan. Anti-Pakistan powers have established different terrorist groups in order to conduct terrorism in Balochistan. Few are operating in the name of sectarian clashes, some on the linguistic basis etc. Killing passengers by sabotaging trains, killing people after checking their ID Cards or killing innocent people by firing rockets in the dark of nights are such terrorist activities of foreign especially Indian terrorists that have always been presented by Western media as activities of Baloch separatists fighting for their rights. India has always been portraying these terrorist activities of her terrorists as a heroic war being fought by Baloch on a big level.


All this is not only Pandora box of lies of conspiracies but a grave conspiracy to stop Chinese access to Gawadar. In order to achieve these nefarious goals terrorists were launched in the garb of Baloch separatists. These terrorist outfits garbed as Baloch freedom fighters accepted responsibility for terrorist activities. But the problem is that after a long tiresome struggle and uncountable sacrifices Pakistan army and Law Enforcement Agencies have successfully controlled terrorism in Pakistan. According to the records presented by Provincial interior ministry the incidents of sectarian violence, target killing etc are decreasing rapidly. One reason behind rapid restoration of peace in Balochistan is the active monitoring of Pakistani border with Afghanistan and operation against Indian agents present in the province. Now it is not possible for Indian terrorists to be at large in the province. Indian terrorist Kulbhushan Yadev belonging to Indian terrorist agency was arrested in Balochistan with the target to sabotage Pak-China Economic Corridor. 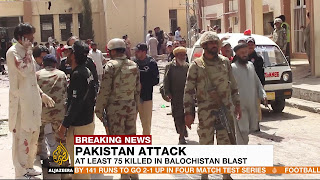 India hosted her terrorists garbed as Baloch in Afghanistan, however, when Pakistan demanded to hand over these terrorists to Pakistan from Afghan govt. along with evidence, India shifted them to Switzerland. When it became difficult for them to control and execute terrorism in Balochistan from these Western Countries due to legal problems, they were shifted to India. India wanted to give them Indian citizenship. However, after arrest of Kulbhushan Yadev this has become impossible for India. After failure of India and other international powers to stop CPEC, the report of AHRC expresses the concerns of anti-CPEC powers who are afraid of benefits that Pakistan and China might reap from such an important project…