The Guardian’s Question about Indian Held Kashmir from International Community! 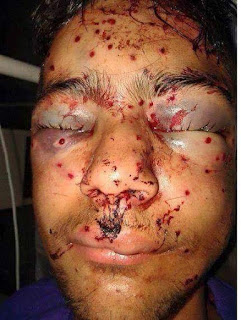 Last month during the BRICS session of developing countries at Indian state Goa, Modi put all of his efforts during address to prove Pakistan as a terrorist state through his propaganda and allegations. India hoped that China may stay silent but Russian President Mr. Putin would support Indian stance. After which India would be in a state to get statement from USA against Pakistan. But China not only expressed displeasure over the Indian propaganda but also made India realize that Pakistan is herself facing terrorism; moreover, Pakistan’s sacrifices against terrorism should be acknowledged while Russia preferred to remain silent in spite of supporting Indian stance. Indian media criticized Modi for spoiling such an important conference due to his non-serious attitude. According to Indian media, the opposition from China aside but the silence of Russia is a big blow to Indian Foreign Policy. This clearly means that Moscow does not support Indian allegations of terrorism against Pakistan. Astonishingly, USA also did not comment on this situation. In the whole period, India was busy in secluding Pakistan while on the other hand India has to face pressure due to the situation of human rights in Indian Held Kashmir. The human rights organizations within India along with the rest of the world were protesting against use of pellet guns (shot guns) against innocent children of Indian Held Kashmir (IHK). All Indian tortures and mass violations of human rights have failed to stop Freedom Movement of Kashmiris. 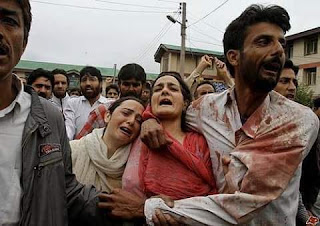 It became tradition to bury those in Pakistani green flag who got martyrdom due to tortures of Indian state terrorists (Hindu soldiers). This is a clear message not only to the New Delhi but whole world that Kashmiri want to live with Pakistan. The conscious elements of the world know that flag of the state is the identity of the any country and getting buried wrapped in the flag of the country shows the love, loyalty and patriotism of the people who bury their dead in the flag. On the other hand extremist Hindu rulers of Hindu India are not ready to accept this reality that Kashmiri consider Pakistan as their real country. 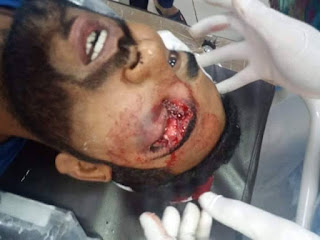 Inhuman tortures of Indian state terrorists to stop freedom movement and unconditional love of Kashmiris have forced Kashmiri people to express their solidarity with Pakistan fiercer. For this purpose there cannot be a greater idea than protesting against India hoisting the Pakistani flag and after death being buried wrapped up in the green flag as well. 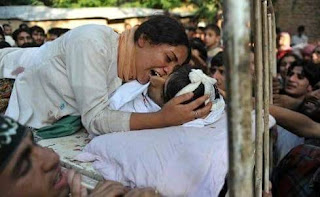 In the light of the increasing tortures of Hindus over Kashmiri people, Eric S. Margolis of Toronto Sun group of Newspapers has termed Kashmir dispute as a volcano. In his article published on 25th September 2016, Eric also criticized world powers as well that they are committing a grave mistake by ignoring the dispute between two nuclear powers who have already been at wars due to this dispute. Such like sentiments were expressed by him in his book “War At the Top of the World”. 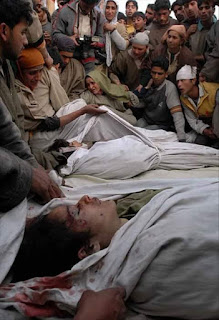 British newspaper ‘The Guardian’ in its edition of 8th November 2016, has explained torture over Kashmiri people by Indian Hindus from a different aspect in an attempt to awaken International community. In its editorial Guardian has strongly criticized the use of Pellet / shotgun due to which in the short period of 4 months 17,000 children and youngsters have lost their sight / eyes. Newspaper has especially mentioned an 11 year boy who was fired from zero point / near distance and hundreds of pellets were shot into his body. According to the newspaper, in a hospital of Indian Held Kashmir, daily 12 operations / surgeries are being done on average in order to remove pellets from eyes of the victims. These pellets are leaving victims completely or partially blind. One can imagine that what would be the situation in the rest of the hospitals. 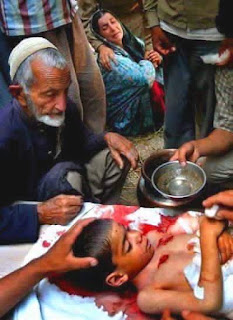 Guardian has mentioned that in 2011, during the protest against Egyptian dictator a police officer fired pellets on 5 protestors for which he was sentenced 3 years imprisonment. Newspaper has asked rulers, intellectuals and other elements of India that how Indian can claim to be the flag bearer of secularism and democracy while India is acting upon the policy of mass blinding Kashmiri people? Does any law, or democratic rule allow state to snatch the sight of the protestors? Does Indian law permit India to do what she is doing as State Terrorism in the IHK; does any civilized society allow this? 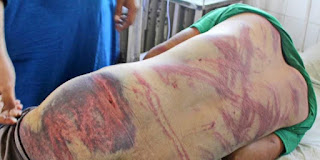 Above mentioned long editorial is the first protest in writing from Western Media published in recent years of Indian state terrorism. The title of the editorial, “India’s Crackdown in Kashmir: Is this the world’s first mass blinding?” wants the answer from international community. Does not Hindu state terrorism in IHK make India a Rogue Nation where first time in the history, state policy of mass blinding the protestors have been implemented.
Now, Hindu state terrorists have been allowed by terrorist Modi to use the sound blasting bombs in order to destroy the hearing of Kashmiri protestors. Due to the blast of these bombs people’s hearing would be destroyed forever. These bombs will badly affect women and children present in the homes. Such like bombs are used in war to destroy the hearing of enemy soldiers and make them stun…