“Sabira and Khushbu” Still waiting for Justice from India! 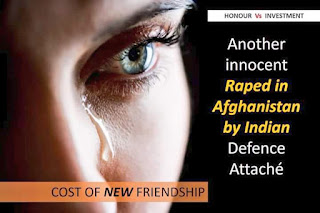 If big powers of the world including USA are forced to bow in front of India for their political and economical interests than this should be kept in mind that the cost of these interests is being paid by the minorities of India especially Muslims and people of Indian Held Kashmir (IHK) because they are not ready to accept Indian slavery. That is why India has turned the paradise on heaven i.e. Kashmir into hell. The priority target of violations and tortures by Indian army are the women of Kashmir. Indian army has adopted the policy of sexual abuse and rape to crush the freedom movement. Under this policy such incidents of rapes have been reported that are enough to make one’s soul shiver and hearts get frightened. But international conscious never condemned India or raised the voice for the protection of the rights of Kashmiri women. That is the silence of the big powers over the war crimes of India against women which have encouraged Indian army officers to rape women even out of India.
Such like incident occurred few days ago in Kabul, an Afghan girl namely Khusbhu (wanting to get scholarship for higher studies in India)was raped by Indian Military Attaché Brig S.K. Narain. When this incident was reported, a women linked with Afghan Ministry of Defense disclosed that Brig Narain had raped her colleague officer namely Farishta as well; the incident was reported to Afghan Ministry of Defense but the higher officials suppressed this incident. The news of rape of Khushbu was also reported through her friend on the Social Media which created a storm on the Afghan Social Media. It was demanded that Indian Brig should be arrested and punished according to law. When Afghan govt. did not give any positive response, the youth of Afghanistan started demanding that Afghan Taliban should punish the Indians raping Afghan girls. Keeping in view the increasing support on the social media for the said demand, Afghan and Indian govt. secretly transferred Brig Narain back to India. When Brig Narain reached India, short news was telecasted by NDTV but after this a grave silence because these are routine news in the context of Indian Held Kashmir.
The coalition govt. of Ashraf Ghani and Abdullah Abdullah claiming to be the representative govt. of Afghans kept silent on such a big tragedy but they did not waste any time when they get chance to defame Pakistan. Pakistan has been hosting millions of Afghan refugees for last three decades. Although, the crime record in Pakistan is not very good but in spite of all this during the last three decades no news of such injustice with Afghan refugees have been reported.
While in Afghanistan such like incident occurred in 2009 as well, 18 year old Afghan girl namely Sabira Ahmed Zadi was abused by Indian Major. Sabira was working as Translator in a women hospital constructed by Indian aid. Sabira was fond of watching Indian movies since childhood, due to her interest in Indian movies she got fluent in Hindi. Her fluency in Hindi helped her to secure the job in the hospital. She went in the hospital to get medicine for her mother; the in-charge of the hospital (lady doctor) got impressed by her Hindi and offered her the job as Translator. After sometime the lady doctor was replaced by Major Chandra Shekhar Pant. When he saw Sabira, he increased his relations with her family and started visiting her house along with the gifts. One day he expressed his wish to marry her but her family rejected him saying that they cannot marry their daughter to a Hindu. After few days of this rejection, the Khateeb of the Jamia Masjid of the vicinity visited her house along with notables of the area. They told her mother that Major Pant has converted to Islam and his new Islamic name is Himat Khan. The elders of her family were present as well. Khateeb (cleric) of the mosque tried convince them that how much reward they would get for converting a Hindu to Muslim while on the other hand if he reverts back to Hinduism due to the rejection of his proposal they all would be sinful. On the advice of the cleric they got ready for this marriage.


The darkest aspect of this marriage is that when Major Pant visited Sabira’s home to get married, he was accompanied by US and NATO army officers, senior Afghan officials, officials from Indian Embassy at Kabul and many other officers of Indian army present at Kabul. They numbered to approximately seven hundred. Sabira got married according to the customs. After two weeks of marriage Major Pant told Sabira that he has been transferred to India. After reaching India, Major Pant called Sabira and advised her to get married as she is a young girl and he did not intend to return to Kabul again. Moreover, he is already married in India and he has children as well. He further disclosed that he is a Hindu and he just acted as being converted to Islam for the marriage. After such tragic deceit Sabira attempted suicide but her life was saved by doctors. After recoverin0,g Sabira visited NATO, US Army, UNO officials, Afghan govt. etc. for justice but no one gave any positive response. Few US journalists advised her to visit India, they helped her to secure visa for India and also gave their references as well in India.
Sabira reached India along with her mother. In these days Major Pant was posted to military hospital in Pithoragarh (Himalaya). How much she suffered in order to trace him out, this is a separate story. When Sabira reached in the house of Major Pant, he flatly refused to identify her. Sabira had only one demand i.e. Major Pant should visit along with her to Kabul and divorce her formally in front of her tribe (family). The local media of Pithoragarh lent their full support to Sabira, local newspapers were filled with the tragic story of Sabira. Famous author Arun Dhati Roy, activated the organization of women rights to support her. Dalits  and minorities students of three universities from New Delhi held processions and staged sit ins in order to support her. On this, US daily Washington Post published the tragic story of Sabira on the title page under the title of “Struggle for justice by deceived Afghan Bride resonates in India” on 31 January 2009. The report not only included the tragic story of the Afghan girl but also silence of Indian govt. and opposition. On the basis of the US report, when Indian journalists contacted Indian Army Chief Deepak Kapoor, he turned down the Sabira’s claim by terming her story as fabricated and false. How long could Sabira have struggled for justice in foreign country along with her ill mother, at least she returned back to Kabul and is still waiting for the justice. Now she is not alone, Khusbu is also accompanying her in the waiting queue for justice. But these Afghan women do not know that no law or code of the world is applicable to Indian army…