The Link with RAW has Become Joke in Pakistan! 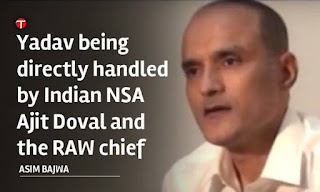 One may look in the books of the history that how those having links with the enemy agencies or working for the enemy against motherland are treated. In these historical records one will not find a single example of sympathy or facility. Every religion, every nation and every society punishes those working for the enemy with exemplary punishments. But in Pakistan everything is upside down. Here the traitors of the motherland are treated as heroes and facilitators of enemy agencies and terrorists are considered among the respected and elite. The links between MQM leadership with India, Indian agencies and elements in power were never hidden and the big political parties of the country were also aware of these links. Due to the political interests and needs they kept their eyes closed. Due to this criminal negligence the roads of the Karachi were bathed with the blood of Karachites. Whole Karachi burnt in the fire of poor law and order situation. However, few months ago Mustafa Kamal, Anees Qaim Khani and Raza Haroon laid the foundation of a separate political party and disclosed the nexus between Altaf Hussain, RAW and India. They disclosed the stories of heavy financial support to MQM by India, Interior Ministry of Pakistan turned down these allegations terming them as point scoring for political purposes and demanded evidence in support of the allegations. Perhaps Pakistan's Interior Ministry meant to say that a CERTIFICATE issued by India should be produced before it that which people are being funded by India and working for RAW.
With the start of the Operation Zarb-e-Azb special powers that were given to the Rangers broke the back bone of the Indian terrorists active in Karachi and the peace was restored. The daily arrests and confessions of the Indian sponsored criminals in Karachi made the role of India in pushing Kararchi into the fire of terrorism. This was further reinforced by a British diplomat in a TV Talkshow in which he disclosed the links between India and Altaf Hussain with the challenge to MQM that if MQM considers this allegation to be false than MQM should take him into the court for false allegations or he will present the documentary evidence.


In the meanwhile, Indian state terrorist was arrested from Balochistan which disclosed the role of India in the terrorism in Pakistan through armed interference in Balochistan and Karachi. This was the strange happening of the modern world for which hardly any example may be found in the current and last century. The arrest of Kulbhoshan Yadev is a big achievement in the modern era. Due to his successful terrorist activities in Pakistan and successfully infiltration and exfiltration multiple times into Karachi and Balochistan, RAW allowed its terrorist to stay within big cities of Pakistan to plan and execute terrorist attacks in Pakistan.
Because India was aware that Link with RAW has become a joke in Pakistan. The pro-Indian elements present in Pakistan in the name of friendship with India had launched such a successful propaganda attack that those who arrested Indian terrorists had to hide their faces. The increasing courage of India is due to the fact that a chunk of Pakistani society being paid by India is not ready to accept India as an ENEMY and blames Pakistan army for the tension between both countries.
But now even the characters linked with East Pakistan and Agartala Conspiracy have opened their mouths that the allegations laid against them by Ayub Khan were based upon facts and reality. This was disclosed on 23 February 2013 by Deputy Speaker of Bangladesh Assembly Col (Retired) Shaukat Ali while commemorating the arrest of Agartala Conspiracy. He told the participants that Sheikh Mujeeb with the Indian support was struggling for the separation of East Pakistan because he had determined that it was not possible through peaceful struggle without foreign ad. In this regard in December 1967, Sheikh Mujeeb along with his loyalties met with Indian Army Chief, RAW Chief and other officers at Agartala. In this secret meeting the plan of separation of East Pakistan, Indian ad, strategy of ad, training militants to use weapons, supply of ammunition etc. were finalized. Unluckily, ISI succeeded in procuring the recording of the meeting and evidence.

When this was reported to Ayub Khan, Mujeeb along with his loyalties was arrested in January 1968. The loyalties of Mujeeb included few officers of Army and Air Force as well. But the Zulifqar Ali Bhutto inciting the nation in West Pakistan under the motto of “ROTI, KAPRA, MAKAN” (bread, dress and living place) termed the arrest of Mujeeb under the allegations of Agartala conspiracy as political revenge of Ayub. Other politicians followed Bhutto as well. Ayub Khan called a roundtable meeting to resolve the issue, politicians of WEST Pakistan declined to participate in the meeting without Mujeeb. In this way through the release of Mujeeb Agartala conspiracy got successful and Pakistan failed.
Indian wants to repeat the same conspiracy of East Pakistan in Balochistan now. That is why Kul Bhoshan Yadev was appointed in the Iranian Chah Bahar port in 2003 to plan and execute terrorism in Pakistan from Iran. He got arrested in Balochistan but what happened to his supporting official at Chah Bahar, Iran arrested him or not? No one knows anything about him. What Pakistanis know is that Modi is active in the whole world against Pakistan while Pakistani rulers are not ready to open up their mouths over Kul Bhoshan Yadev because he belongs to India and Indian RAW…