Why India is Satisfied over the Arrest of RAW Operator???

Our intelligence agencies are to be congratulated for not only arresting an agent of RAW Kulbhushan Yadav from Makran Division Balochistan but making him confess and procuring his true India within the four days of investigation. RAW has been working to upset the law and order situation in Pakistan especially Balochistan for last 13 years. The arrested RAW operator was an important spy and terrorist of RAW. During the investigation he also disclosed the targets given to him by Indian govt. His video clip has been released to the media. Of course, this is just a trailer of the film in which Indian terrorist was involved. It is hoped that in the coming days more videos of disclosures and confessions would be released as well. Is he the first Indian terrorist arrested in Pakistan or such “Indian State Actors” (terrorists) have not been arrested before?

“I went to Pakistan for spying, I was sent by Indian army”. These are the words of Indian spy/terrorist Sarjeet Singh in 2012 who was suddenly released with the support of magical forces within Pakistan. He confessed his being a terrorist as soon as he addressed a Press Conference in India in front of civil and armed forces personnel of India. Sarjeet Singh was arrested during the reign of General Zia ul Haq for being involved in terrorism, remote control bomb blasts and spying. He confessed his crimes in the court and was sentenced to death but before his execution Benazir Bhutto came into power and as a celebration of Benazir’s coming into power sentences of all those sentenced to death were converted to life imprisonment. In this way despite of being involved in the murders of hundreds of Pakistanis, Sarajeet Singh was saved from the punishment. In 2012, when the unilateral struggle to improve ties with India was on peak, an NGO from within Pakistan started a campaign for release of Indian prisoners in Pakistan which resulted in the release of Sarjeet Singh. In Pakistan it was told that another terrorist Sarabjeet Singh was released and the release was announced with the name of Sarabjeet Singh as well. From his release to entering into India, private TV Channels of Pakistani gave him the full coverage and Sarabjeet Singh remained the point of discussion for Pakistani media and was released respectfully.

Before this that he made any other disclosure in the Press Conference, the armed persons standing besides him held him and made him stand and another Indian army officer put a big chunk of sweets in his mouth in such a way that for a short time it was not possible for him to speak or open the mouth. Journalists present on the spot understood that Press Conference has been ended. Pakistani media along with the govt. did not react on the Press Conference of Indian terrorist Sarjeet Singh.
In 2011 when Justice Markanday Katju of Indian Supreme Court appealed to Pakistan for release of Indian terrorist and spy Gopal Daas imprisoned in Pakistan for last 27 years; pre-elements in India welcomed this appeal of Indian justice as release of Indian terrorist would suddenly convert Indian enmity into friendship. The newspapers of April 2011 show that how much in hurry few influential personalities were to get the Indian terrorists released. They wanted to release Indian Prime Minister before Pakistani Prime Minister’s visit to Mohali to watch Cricket Match. Apparently, they wanted to decrease the tension between two nuclear powers. 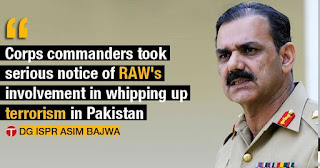 One may remember the marvelous of Kashmir Singh whose list of crimes against Pakistan’s integrity is bigger than Sarjeet Singh and Gopal Daas but he was released respectfully by Pakistan as well. While discussing Indian State Terrorists / Spies arrested in Pakistan, another worth mentioning name is Kashori Laal alias Amrak Singh. What he did in Pakistan, how he was arrested, what was his role in insurgency in Balochistan, fueling linguist disputes and bias, sectarian clashes etc. All his activities were disclosed when a book written by him by the support of Indian govt. “My Years in a Pakistani Prison” was released based upon his memoirs.

We kept silent as we kept silent on the interview given by the Ajeet Kumar Dowal. He told in very proud manners that how he remained in Lahore for seven years with a fake name. in 2013, before release from the prison, Indian terrorist Sarabjeet Singh was killed by other inmates due to some quarrel otherwise pro-Indian elements in power in Pakistan have left no stone unturned in his release.