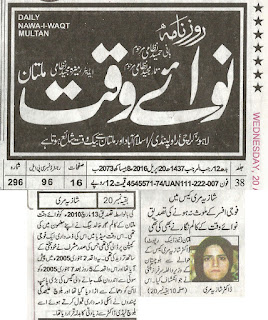 Recently, Sarfraz Bugti, Interior Minister of Balochistan Pakistan unveiled the real culprits behind the notorious rape case of Dr Shazia Murree on 02 January 2005. He made it clear that said Dr was raped by men of Nawab Akbar Bugti on his special orders not by the Captain of Pakistan Army. After raping her these two men fled to Switzerland with the help of the Akbar Bugti and foreign supporters.
A wave of Propaganda was launched against Pakistan army for raping innocent lady Dr who later on fled to Europe in order to avoid investigations.
Some paid elements within the Pakistani media and politicians exploited this drama to defame Pakistan army and a propaganda war was launched to make Pak Army's role, and credibility suspicious within the country.
We negated this propaganda after thorough research that Pakistan army or any officer / soldier of Pak army is not involved in this hideous incident. We wrote a comprehensive article "The Told Untold Story of External Interruption in Balochistan". But some filthy and traitor elements within our media and politicians left no stone unturned to defame Pakistan army. Even some anchor persons and so-called liberals claimed that there are many such incidents of humiliation of Baloch women that are not being reported. In this India, Pro-Indian elements and anchorpersons working for easy money all benefited from this crime of Akbar Bugti. Here we quote an excerpt from the article discussing the case of Dr Shazia Murree...

The main line supplying natural gas from Balochistan to whole country was destroyed by Dynamite on 7th January 2005. Most part of the country was deprived from natural. The industries were paralyzed but household were also much effected. The natural gas department restored the pipeline after hard work of a week but due to this incident govt. has to bear loss of billions which was ultimately the loss of whole nation. The responsibility of this act of terrorism was accepted by Baloch Liberation Front. As a reaction to a so called incident on 2 January, 2005 (five days ago) in which a Lady Doctor was allegedly raped by a Captain. If the she had been called in spite daughter of Balochistan, daughter of Pakistan or Pakistani the sensitivity of this incident had decreased. Nor the culprit has been forgiven. But in this way situation in Balochistan cannot be equivalent to stories of Pakistan Army’s violence in West Pakistan 1975 (which has been proved fake propaganda of Hindus by time and Bangladeshi historians). Political leaders against Musharaf and all intellectuals thought it necessary to use this incident against him. Taking this as an evidence some groups targeted army, it was given name of oppressor, conqueror of own country and murderer of public. In such situation how the inquiry of alleged rape was possible. Baloch started struggle for revenge. Everyday the destruction of gas pipelines became routine. Such a fire was set in the Balochistan that its heat could be felt in whole country. During this time affected Lady Doctor shifted to Europe. However the disturbance in Balochistan took a new turn and army and its buildings were directly attacked. The history after this is not much old. Musharaf left, dictatorship left. Era of democracy started in the country, two years have passed. But the problem of Balochistan is still going on. Non Baloch’s are being target killed. Then was the act of gang rape with lady doctor was the real cause of disturbance in Balochistan? In fact this incident is a little “scene” of a big damn plan whose script was written in 2002. There one question rises in minds whether it is the incident of walking a nude woman on the roads of Nawabpur, Multan in Zia-ul-Haq Regime (which was propagated in international media and protesting against Aasima Jahangir got famous). Either it is the incident of gang rape with Muhktiran Mai or incident of rape with Lady doctor, so much disturbance is made, (May Allah protect all of us), but as soon as army govt. is removed people forget about such incidents. Seems that it is also a part of struggle against dictatorship. How much reality was in these incidents ask to inhabitants of Nawabpur and Muzaffargarh.