“Do You Remember Kunan Poshpora”

When we compare ourselves with the past era we feel pride that we are living in the civilized era. We tell the stories of the Ganges Khan and Hulagu Khan or other bad rulers to our younger generations so that they may imagine that how rulers from the past treated their subjects. People were treated like animals and enslaved. Powerful nations attacked and destroyed the weak nations, properties were looted and destroyed, villages were burnt and destroyed, men who dared to stand were killed and those who did not fight were enslaved, women were enslaved, markets were setup for their sale. Purpose of such barbarism was just to show off their power so that no one dares to challenge their orders. Is all this not happening in today’s so-called civilized era? Leaving rest of the world aside, such like stories of violence and torture are repeated daily in Indian Occupied Kashmir. The shameful aspect is that so-called civilized world is silent over Indian state terrorism and gross violations of human rights as weaker nations chose to remain silent over the violence of Hulagu or Gangese Khan. Has India become such a big power that Indian state terrorists (soldiers) gang rape the women of a village in a state controlled by India and world acts just like as a spectator enjoying the show? In such a situation, the so-called civilized nations should consider the difference between their acts and thinking.

How can anyone claiming to be human forget the tragedy of Kunan Poshpora? Indian soldiers besieged the pitiable village and in the name of the search, women of the whole village were separated from men and gang raped. Even if civilized world ignores this tragedy, the social problems being faced by effected families and women of Kunan Poshpora would haunt them for generations.
This tragedy happened on the night of 23 February 1991 when state rapists of India belonging to 4 Raj Rifles besieged a village Kunan Poshpora of District Kupwara. Villagers were told that Indian soldiers have came there following separatists, therefore, they will have to search the whole  village. Those who denied to accept this order were tortured inhumanly. On the gunpoint, they were ordered that one man at a time should go out of the house bowing his head downwards. It was declared that every male who did not go out of house either elderly or ill will be shot dead considering him as a companion of Mujahideen. On the gunpoint, all men of the village were forced to sit in an abandoned place away from the village. After this rapists of India entered into the houses in the names of search for raping the women of the village. During this search hundreds of Indian soldiers (state rapists) raped and humiliated the women of the village for the whole night, from underage girls to 80 years old women, no one was spared. 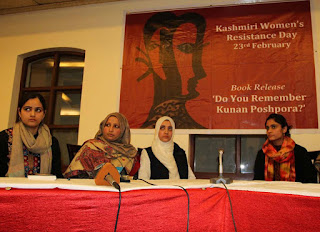 On the hue and cry of the women whenever any male dared to stand up, he was tortured by Indian state terrorists; few men who dared to snatch weapons from Indian soldiers were shot dead. Till the dawn Indian state terrorists fulfilled their satanic mission and went away. The sun was also ashamed because whatever Hindu rapists had done, perhaps it had not witnessed it during its whole life. The very next day the news of the tragic incident spread like a fire in the whole valley of Kashmir, Indian Police besieged the whole village and converted it into a no-go zone for media. Despite of all this, this tragic incident was flashed as a breaking news on the Indian Media posing that Kashmiris have alleged Indian state terrorists for this act of gang rape.
Indian govt. denied any such incident and blamed Kashmiri Mujahideen that they want to pressurize Indian army through such propaganda as a part of Kashmiri Mujahideen struggled against India, however, despite of this Indian govt. is ready to hold an enquiry. On the other hand, Chief Justice Mufti Bahauddin Farooqi of Jammu and Kashmir High Court formed a Judicial Commission to find out the reality with the remarks that in the history of Jammu and Kashmir High Court no such crime has been reported on which Indian state Police has shown such negligence. Indian Police replied that as Superintendent of Police is on holidays, therefore, registration of FIR is not possible and Police is unable to hold any inquiry. Judicial Commission met with 53 Kashmiri women and reported that no such incident of gang rape had ever happened, when Kashmiris started protesting over this judicial report, Indian govt. formed a Media Commision and sent it to the District Kupwara.

Divisional Commissioner Wajahat Habeeb Ullah of Indian Occupied Kashmir also visited the Kunan Poshpora  along with Indian media commission on 18 March 1991 and repeated that whole story is part of propaganda against Indian army. On the findings and denial of the Indian Media Commission, Asia Watch and UN Commission for Human Rights termed it as Indian stubbornness and demanded that Indian soldiers involved in this war crime should be brought to justice. Curfew was imposed into different districts of Indian Held Kashmir in order to control the protests. Kashmiris daily participated in the protests without caring for their lives, Indian Police and army used baton charging and live bullets to stop the protests, this continued for three months during which hundreds of Kashmiris were injured and martyred. Neither protests nor the state torture subsided.
At least US had to break the silence by the statement, “There is solid evidence of gang rape of Kashmiri women by Indian soldiers, thus, USA rejects the reports of Indian Media and Judicial Commissions. Therefore, India should take steps to deliver justice to the aggrieved Kashmiri women”. On the statement of USA, Divisional Commission Wajahat Habeeb Ullah of Jammu and Kashmir resigned. State Police also broke the silence that they were pressurized not to hold the inquiry, whenever any Police team went for inquiry into the village, agents of IB, MI and Military accompanied them in civil dress and they were not allowed to meet with the effected women. When pressure developed on the international level, India promised to investigate the whole incident through a high level commission and arrest the culprits. Although, the protests ended on the Indian promise but the effected women are still craving for the justice.

What happened to the victims of Kunan Poshora tragedy in last 25 years, in order to inform the world about it and express solidarity with women of Indian Held Kashmir, 5 girls from Kashmir have compiled a book “Do You Remember Kunan Poshpora” based upon the documentary evidence of Kunan Poshpora tragedy, challenging India and whole world that they will not let them forget this tragedy. This book has been published on 23 Feb 2016. This book consists of 5 chapters. First chapter consists of govt. documents, second has been written by Natasha that how India uses raping Kashmiri women as a state policy to suppress freedom movement, third has been written by Munaza Rashid that how miserable the life of effected women have became,  fourth by Samreen Mushtaq and fifth by Arfa Bhatt that why people of Indian Occupied Kashmir have not been able to forget this tragedy? These daring girls have fulfilled their duty by writing this book but left a question a word for the so-called civilized world that whether they remember this tragedy or not…