What would be the consequences of David Headley’s video statement given to India, any conclusion would be before time, however, we may analyze it in the light of the few past incidents. India has successfully given twists to the story of Mumbai drama since 2008 through its intelligence agencies and media due to which not only world does not lose interest in it but also waits impatiently to see the “Drop Scene”. Due to such awful directorship of Indian govt. now a days a new character of this drama has become the focal point of media in India. The entry of this character has also made US support in the staging of Mumbai drama doubtful as well. The name of David Coleman Headley was disclosed  when the only terrorist of Mumbai drama was presented before the court in 2009 after the charge sheet against him was presented in the court. In front of the judge, Ajmal Qasab gave the statement that Police arrested him before 26 November 2008. During detention, Police arranged his meeting with an American who used to speak Hindi as well. As he had came to Mumbai for his fond of working in  movies, Indian Police told him that said American can help him to get work in the Indian movies. Afterwards, when he was alleged for being involved in Mumbai attacks, David Headley along with senior Police Officers several times met with the Ajmal Qasab; David lured Qasab that if he admits his involvement in Mumbai he would arrange his freedom from detention and he would be introduced into Indian Movies as well.


When this statement of Ajmal Qasab was published in the newspapers, no one paid any heed to know the name of the David Headley. Although, Indian media famous for discussing the minute details of any valueless incident but in this case the name of an American involved in Mumbai attacks was plainly ignored and Pakistani media ignored it as per routine. Ironically, India had alleged Pakistan for Mumbai attacks but no one felt the need to get the information that who this American is. The President of Pakistan gave the statement even before or as soon as the attacks began that non-state actors of Pakistan are involved in these attacks. Indian media took this statement as confession from Pakistan.
After few days of Mumbai attacks Indian Interior Ministry disclosed that David Headley is the mastermind of the Mumbai attacks having links with Pak army and Lashkar-e-Taiba. If we link the allegations of India on 30 November 2008 with the current statement of David Headley, it makes clear that what would be the future Indian strategy. Indian Interior Ministry was of the view that Ajmal Qasab and his fellows got guidance from Pakistan during the 58 hours long Mumbai gun battle. Afterwards, similar allegation was laid upon the David Headley that he was in contact with Pak army officers through mobile.
When David Headley along with his business partner Tehwar Hussain Rana was arrested in USA by FBI on 8 December 2009, Indian govt. and media posed that he has been arrested due to the audio tapes and other evidence provided by Indians for involvement in Mumbai attacks. According to the record of the FBI David Headley and Tehwar Hussain Rana both were arrested on 27 October 2009 as they were planning to attack the newspaper that published blasphemous cartoons of Prophet Hazrat Muhammad (Peace be Upon Him). 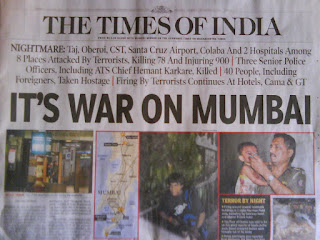 Afterwards, on 18 March 2010 Headley was charged with the allegations for supporting terrorists in the Mumbai attacks and being cause of deaths of US citizens in this attack. US media while breaking this news disclosed that David Headley has links with CIA and other US agencies, although, he has been arrested keeping in view the Indian hue and cry but he will never be handed over to India because in this way his links with CIA would be disclosed. With his arrest, India started demanding that Headley and his fellow should be handed over to India, as he is wanted by Mumbai Police. This demand echoed in the media of the whole world even US media joined Indian side as well. On this USA got ready to give access to Indian Police to Headley for investigations in Chicago. Taking this opportunity enough for propaganda a team of National Investigation Agency NIA consisting of 3 officers visited Chicago and investigated Headley for a week. What did they get in the investigations was clearly disclosed in the CNN on 26 June 2010 that Indian investigation team failed to get even a single word from Headley..