Pakistan cannot be blamed for Individual Act of Tashfeen Malik

Propaganda and hatred campaign of Donald Trump (expected candidate for President from Republican Party USA) against Mulsim and Islam was going before the firing incident that took place in California, which was increased after terrorism in Paris. He was demanding to ban the visit of Muslims in USA, limit Muslims of America to their residential and business areas, keep mosques under observation and these demands have been boosted after the recent California firing. Although US govt. has criticized the hatred campaign of Trump and threatened to declare him unfit for Presidential campaign (although chances are nil) but Trump has been stuck to his demands. Donald Trump has decided to further his election campaign on the footprints of Modi’s anti-Muslim campaigns in India.

Are not the US govt, establishment and media are not responsible for the hatred against Muslims in USA? They react differently if non-Muslims are involved in such incidents and if God forbade Muslims are involved in such incidents than their links are sought to terrorist organizations (created by USA) and Pakistan and propaganda is started. Such tragic incidents of firing are routine of USA. If Muslims are not involved in such incidents no one pays the heed to investigate that from where the parents of accused had come from, what were their religious thinking, what force was responsible for forcing them to such extreme step; accused either shot themselves or get killed by US police. USA media also did not discuss on the religion and links of such non-Muslim terrorists. The case is just dumped for the reason that the murderer was just psychic or suffering with psychological problems. Even Timothy James ex-US Soldier who attacked FBI building with truck laden with explosives on 19 April 1995, no one questioned his religion as Catholic Christian and impact of his religious thoughts over the attack. He was Irish but no one linked him to the Irish Republican Army active in Britain. He was trained from Infantry School in USA, Timothy was arrested and executed for his crime. Although 168 were killed and 600 injured in this incident did anyone accuse Ireland, Catholic Christianity, his teachers and trainers in US infantry school?

Than why international journalists have targeted Bahauddin Zakariya University Multan for investigating the link of Tasfeen Malik with alleged firing in USA? Why they are trying to accuse this university for fueling extremism. Even a US newspaper declared this university as a TROUBLED UNIVERSITY? Why they are trying to pose in their propaganda that this university is involved in spreading extremism which has been disclosed after the attack in California. As soon as the link of Tashfeen Malik with Pakistan was disclosed a specific anti-Pakistan group of Pakistani Media jumped in to find her links with religious extremism and fabricated stories of her inclination towards religious extremism were published due to which Bahauddin Zakariya University became focal point of international media. 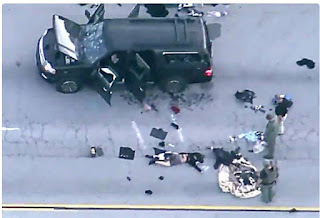 When representatives of Western Media along with few local journalists were getting ready to attack Bahauddin Zakariya University Multan, the news was reported that 4 hours long investigation of FBI with the family of Tashfeen Malik and Syed Farooq has revealed that the couple had no links with any extremist or terrorist organization. The news regarding involvement of a Muslim couple in terrorist attack were criticized in the USA as well. On the social media US people demanded that govt. and media should stop deceiving public and bring forward the reality. According to the interview of an eyewitness to the CBS News Channel the attackers were three in number wearing masks, one was wearing hat, they had athletes like build up and they seemed to white. In the light of the this interview US officials searched for these three men. One of the witnesses said that Syed Farooq the alleged Muslim terrorist had left the gathering 28 minutes before the attack.

After this the media turned its propaganda canon towards Pakistan. After few hours it was reported that Tashfeen Malik and her husband Syed Farooq have been killed in a Police encounter. The picture issued by the Police shows the handcuffed dead body of Syed Farooq lying on the ground. The semi-nude dead body of Tashfeen Malik has been also issued by the Police. Americans have raised the questions that why a young lady having extremist thinking and planning to attack would give birth to a baby? Moreover, how is it possible that Syed Farooq after leaving party just in 28 minutes took a car on rent, armed himself with his licensed automatic weapon and attacked centre of handicapped people? Alleging Muslims for terrorism just on the basis of hypothesis would raise new questions. This is also a point of concern that what type of the new demands would be made to Pakistan under the cover of Tashfeen propaganda against Pakistan. The pro-activeness of Pakistani media on the Tashfeen problem has raised many question in Pakistani public that why few elements in Pakistan prove to be more active in propaganda against Pakistan???