Joint Footprints of ISIS and RAW in the Region 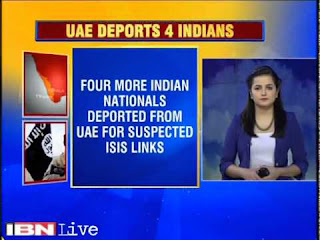 This is not a routine news report that a Hindu girl from India was planning to join ISIS in Syria. Her plans were accidentally leaked out when she left her email account signed in; her father (a retired Colonel from Indian army) who was observing changes in her behavior exploited the chance and skimmed through his daughter’s emails. The information he got was enough to jolt him. He at once called National Investigation Agency (NIA) who at once took her into custody and interrogated her in friendly environment. Afterwards IB also joined the investigations. Her investigators were astonished that despite of leakage of her plans she was still insisting on joining the ISIS. Indian govt. attempted to divert the discussion going on internationally over the links of Indian secret agencies with ISIS by presenting the hypothesis that girl got inclined towards ISIS during her 3-year long stay in Australia.

Indian govt. might have succeeded in her plans but last month on 20th September 2015, another story was reported in which one week before the incident of the said girl (student of Premiere University New Delhi India), UAE had deported 4 Indians for allegedly luring people to join ISIS over the social media. They were arrested over the Indian airports on their return and now they are in the joint custody of NIA, Immigration Department, RAW, Special Police and IB. The interesting aspect of the story is that unless the report of the Hindu girl was not leaked out, all investigating Indian agencies were just saying that the case is much complicated and would take time before reaching any conclusion. Why investigations are taking so much time while the arrested Indians are not hardcore criminals that might be hard to be cracked by investigation agencies to get the facts and their reality? The real hardship being faced by Indian agencies is the disclosure of role of RAW in the case. RAW is utilizing UAE as a safe heaven for its terrorist activities. Recently arrested target killers from Karachi had disclosed during investigations that they were taken to India via Dubai for training of using firearms and terrorism. On the other hand the nexus between RAW and ISIS in Afghanistan has also became a hot topic.

India is trying to pose that daughter of Hindu Colonel fell in love with ISIS during her stay in Australia for studies, however, Indian Media is not ready to accept the hypothesis forwarded by Indian govt. Here it is important to mention 37 years old Afshan Jabeen  who was expelled from New Delhi due to her alleged link with ISIS in the first week of September 2015. Delhi Police got suspicions that she had some role in recruitment or luring persons to join ISIS.

She also passed her childhood in Dubai. She stayed there until completion of Matriculation and afterwards returned to her parent city of Hyderabad. She got B.A from Shudan College and got married to a Hindu Devindr Kumar from Hyderabad whose nick name is Mustafa. After marriage she returned to Dubai along with her Hindu husband. Indian Police got information about her as “Nicky Joseph” a British Citizen living in Dubai when an Indian namely Suleman Muhayuddin was arrested in January 2015 on the Hyderabad airport. Suleman was going to Syria via Turkey. During investigations Suleman disclosed that he along with Nicky Joseph lured many people from Andhra Pradesh, Bihar, Maharashtra Tilangana and other Indian areas over facebook through different fake accounts to join ISIS in Syria.

Indian secret agencies claim that they reached Afshan Jabeen alleged Nicky Joseph on the information they gathered from Suleman during investigations. On the information provided by Indian Secret agencies, UAE deported Afshan Jabeen. If we accept Indian story to be true how is it possible that UAE already afraid of ISIS having strict laws and security deports a foreigner over her links with ISIS and did not investigate her itself? Why mostly Indians are being expelled from Dubai for links with ISIS? Such like questions are being discussed over international level. Another important question is that in June 2014 ISIS had taken nurses from various countries as hostage in the city of Mosul Iraq which included 46 nurses as well. What type of relations Indians had with the ISIS that ISIS freed only Indian nurses???