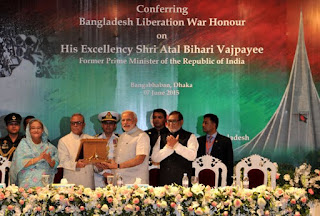 The proud confession of Modi for being part of conspiracy which resulted in fall of Dhaka in 1971 is a slap for those bastards and traitors in Pakistan who have been involved in defaming Pak army and alleging Pak army for rapes, murders and violations of human rights during operation in East Pakistan before 1971 which according to these sold out minds resulted in separation of Bangladesh. In contrast to their treacherous propaganda, Indian critics and Western analysts wrote uncountable columns in newspapers to bring forward the ground realities. Books were published as well. Sharmila Bosle, Indian writer linked with Oxford University after research of ten years disclosed many facts and ground realities backed by arguments negating all the propaganda against Pak Army. She proved with rational reasoning that whatever we were told about operation of Pak Army and identity of Mukti Bahni, was fake and propaganda as required by India. She also challenged all the fabricated stories told by our anti-army traitor so-called analysts which they repeat on every 16th of December in a very attractive manners to brain wash our younger generations just as their fathers did in 1971. Despite of being a Hindu woman she courageously challenged the propaganda of Indian Masterminds of Media, establishment and secret agencies. She challenged that even if there are 100000 men it is impossible for them to rape 1000000 women in limited period of 3 months than how is it possible that approximately 35000 Pakistani soldiers raped 1000000 Bangladeshi women? This book was welcomed by many renowned Indian writers and intellectuals.
But many so-called analysts in Pakistan kept sticking to their fabricated stories against Pak army and received “Friends of Liberation War Honor Awards” from Haseena Wajid in Dhaka. These awards were announced to be given to those friends of Haseena Wajid, who participated in treason against Pakistan in 1971, played active role in the separation of East Pakistan and practically helped Mukti Bahni.

Now lets come towards the reality of Mukti Bahni which has became more important after statement of Modi given in Dhaka. India, Indian Media, Sheikh Mujeeb, Awami League and its supporters, Haseena Wajid, Bangladeshi Media influenced by Indian Media successfully portrayed in front of international community from last 44 years that Mukti Bahni consisted of those youngsters who became treacherous due to atrocities committed by Pakistan army during operation  in order to take revenge and later on stuck to their decision for separation from Pakistan, whole world including Pakistani think Mukti Bahni was Gorilla force of Bangladeshi youth. In 2012,  when Haseena Wajid PM Bangladesh, announced to give awards to those who helped in the separation of Bangladesh in a splended ceremony on 15 December 2012 and names of the winners were of the award were announced; Brig Ratak Nag Wang (living in New Delhi) Commander Secret Tibetan Regiment (established with the help of India against China) made a jolting disclosure that in 1971 trained Tibetan terrorists of Secret Tibetan Regiment were fighting against Pak army in the garb of Mukti Bahni (just like as terrorists in Balochistan in the garb of Baloch Freedom Fighters and TTP in Tribal areas) and Mukti Bahni did not consist of Bengali youth. He said that his men were not ready to indulge in this war but India pressurized them by the visit of Gyalo Thondap, Brother of Dalai Lama to Dera Dhon. He made an emotional speech in the presence of Indian General S.S. Uban and told them that if they fight in Eastern Pakistan against Pakistan army, India will help them to separate Tibet from China and Indian army would fight side by side against China and this promise was verified by Indian General as well (this shows that from Sri Lanka to China there is not a single neighbor of India that has not been bitten by Hindu Snake).

So Tibetan gorillas brain washed by the Indian promises entered into Eastern Pakistan in the garb of Mukti Bahni but name of a single Tibetan has not been included for the award of Friends of Liberation War Honor while Tibetans sacrificed their lives. Tibetan Brigadier expressed indifference to the massacre of pro-Pakistani Biharis and Bengalis after fall of Dhaka and said that workers of Awami League, friends of Sheikh Mujeeb and Indian Police force that was called from Indian Bengal in the name of restoration of peace were involved in genocide of Pakistanis in Bangladesh.

Not only in Pakistan but on the international news websites the discussions are going on these disclosures, it has become difficult for Indian anchor persons, journalists and intellectual to defend and explain the statements given by Modi and his Ministers. They are unable to defend and explain the claims by present Indian rulers for separation of Bangladesh. In such a situation it was hoped that those so-called renowned Pakistanis who received awards from Haseena Wajid for their treason against Pakistan and loyalty towards India would not only excuse from Pakistani nation but return Bangladeshi awards as well but they proved to be more shameless than Modi and his Cabinet. The interesting aspect of Boasting of Modi is that heinous role of India has been unveiled which has not only united Pakistanis but Modi is facing criticism as a Prime Minister internally that a person who started his career from a tea stall and became Prime Minister due to his Religious Extremism, may become a reason for serious tragedy for India due to his selfish personality. Especially statement of Modi after receiving award that he went to New Delhi to participate as a volunteer in Simbah Group supporting Mukti Bahni in 1971 shows that he is devoid of any shame, etiquettes, moral values and grace that should be present in a Prime Minister of  the country…