Queen of Emotions “Sushma Swaraj” and Modi’s new Movie “I Do not Accept”!!! 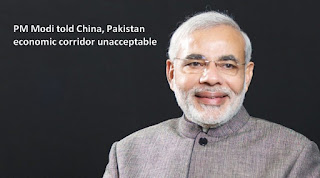 “Who has told you that Indian cricket team is going to Pakistan to play cricket series? All such news are baseless; Indians have no plan to play cricket with Pakistan, India-Pakistan peace talks will only be fruitful when Pakistan would have over accused people in Mumbai attacks including Lakhvi. As long as Pak-China Economic Corridor is concerned we have made it clear to China that it is unacceptable”. This dialogue is not from an Indian movie but from the press conference of Indian Foreign Minister Sushma Swaraj which she addressed on 31 May 2015 at Delhi. If  we look at this press conference closely the only purpose or pivotal point of the press conference was that Pak-China relations are unacceptable for Hindu India. Modi and his party BJP and RSS had their campaign for elections only on points like enmity towards Pakistan, negation of Pakistan, commitment to remove Muslims from the region etc. during the election campaign the choice of words was not less than a film script. Pakistan ignored the language used by extremist Hindu party as a part of their election campaign hoping that on success of Modi, BJP establishment would show some maturity. The last one year had proved that Modi establishment is not ready to give up Hindu extremism and much influenced with the Bollywood dialogues. Sometimes BJP is seen involved in torture over Kashmiri students studying in Indian Universities and sometimes announcing impracticable plans for establishment of Hindu Pundit villages just like that of Jewish villages in Palestine. Threats to teach Pakistan a lesson; they are giving such statements in turns, Indian Chief ends his threat followed by day dreams of Indian Interior Minister when he tires terrorist Ajeet Kumar, special advisor Modi for terrorism jumps in. Indian army is also continuing violations over LoC and international border by unprovoked firing over civilians in Pakistan which has resulted in displacement of thousands of Pakistanis, many farmers have been martyred and crops have been destroyed.

Scene changes; Indian Defense Minister visits front posts of Indian army, without any provocation only in order to threaten Pakistan he discloses all bitter reailities of Indian terrorism in Pakistan which we have been disclosing for so many years but Indian paid dogs of AMAN KI ASHA term them as Conspiracy Theories. He said that Indian Army is not to be used against Pakistan (so Indian army should wear Saris and bracelets) we will use terrorists in Pakistan. On his return to New Delhi, Sushma Swaraj takes the stage and threatens Pakistan with a message only for China (she forgets that how China banged India in 1962 and captures Indian Occupied areas claimed by China every years) because Economic Corridor is more important to China than Pakistan that is why China has taken the responsibility to bear all the costs. China not only understood the emotional statements of the Modi’s Heroin but reacted over it in China’s traditional style of using limited words that China rejects Indian stance over Pak-China Economic Corridor. Indian establishment understood the message in the Chinese reaction but how can they make their extremist terrorist Hindu voters, intellectuals, party workers etc. who consider Modi as an avatar of Shiva? After three days of Sushma Swaraj once again enters on the stage and claims that Gilgit Baltistan of Pakistan are integral part of India and elections of 8 June are illegal, followed by Udhay Thakuray (grand child of Bal Thakray) Chairman RSS holds a press conference and announces to teach a lesson to Pakistan. How this lesson would be taught and whatever that terrorist Hindu said, aside from this why India acting so violently? Is the Increasing strength of Kashmir Freedom Movement, destruction of Indian terrorist network in Tribal areas is the reason behind immature violent statements of Indians or terrorist voters of Modi have started asking him that when he will act upon his manifesto of End Pakistan? 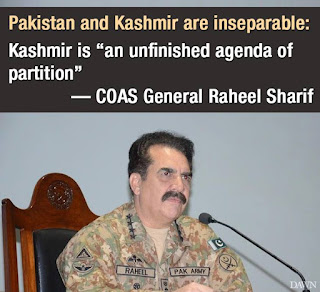 Whatever the reason is, our sold out political could not react over Indian irresponsible statements because of their business and other damn interests, as a result Army Chief General Raheel Shareef had to come forward to make clear the stance of Pakistan and reaction of Pakistan in case of any misadventure by Hindu Terrorist India, which is the only effective cure of Hindu war mania. Our politicians are not ready to give up their policy of compromise within and outside the country. This is the weakness of our politicians that India is not ready to give its rhetoric over Indian Occupied Kashmir and other disputes. We can only request politicians to show some loyalty to the motherland from where they get their power and food that they should take Indian threats seriously and put a ban over Indian movies and products…