We Want Peace but With Dignity!!!

The statement given by General Raheel Shareef, Chief of Army Staff of Pakistan Army during his visit to International Institute of Strategic Studies, UK that “Pakistan wants Peace but with Dignity and Honor” was actually an effective reply on international level to Indian war mania which has been observed since Hindu Extremist Narendra Modi came into power. General Raheel Shareef, made this clear to USA and UK during his visit to these countries that aggressiveness and violations of ceasefire adopted by India over Line of Control and working boundary are creating problems in Pakistan’s war on terror. Major General Asim Bajwa, DG ISPR clearly said in a press conference at London that India is suffering with war hysteria and we know its treatment.
Chief of Pak Army was forced to take a stern stance against India because extremist Hindu govt. of Modi that came into power due to its elections campaign based upon anti-Pakistan and anti-Islam sentiments; now in order to satisfy its extremist voters India has resolved to unprovoked violations over Line of Control (LoC) which has been extended to working boundary as well. Dozens of innocent Pakistani civilians have lost their lives due to Hindu terrorism over Pakistani borders. Moreover, the statements given by Indian Ministers are aggressive as well which shows that in near future Modi govt. has plans to attack or launch a limited war against Pakistan. Indian plans might be imagined from Indian Defense Minister’s statement given on 14 January 2015 at Lucknow that India will teach such a lesson to Pakistan that Pakistan will forget proxy war in Indian Held Kashmir. He said that although he cannot disclose this to the media that what India is about to do but in coming days Indians would notice that Pakistan has decreased dispatching terrorists in Indian Held Kashmir which is already 60-70% less due to steps taken by India. Same like statements had been given by Indian Interior Minister Rajnath Singh against Pakistan that despite of giving befitting reply to Pakistan several times; Pakistan has not learned a lesson. The aggressiveness in the statements of Indian Ministers shows that India is suffering with pessimism due to effective operation against Indian sponsored terrorists in Pakistan and improving ties between Afghanistan and Pakistan especially after attack over Army Public School Peshawar on 16 December 2014.

On the 2nd day of the Peshawar School terrorist attack COAS General Raheel Shareef along with General Rizwan, DG ISI visited Kabul with the undeniable evidence of links between Mulla Fazlullah TTP terrorist and Indian secret terrorist network of RAW; not only this the evidence of live conversation between terrorists attacking Peshawar School and directions being given to them from Afghanistan was also included. All this evidence was undeniable for Afghan President Ashraf Ghani and ISAF Commander. On the basis of such evidence, Afghan President was forced to issue the orders of arrest of Mulla Fazlullah either alive or dead. 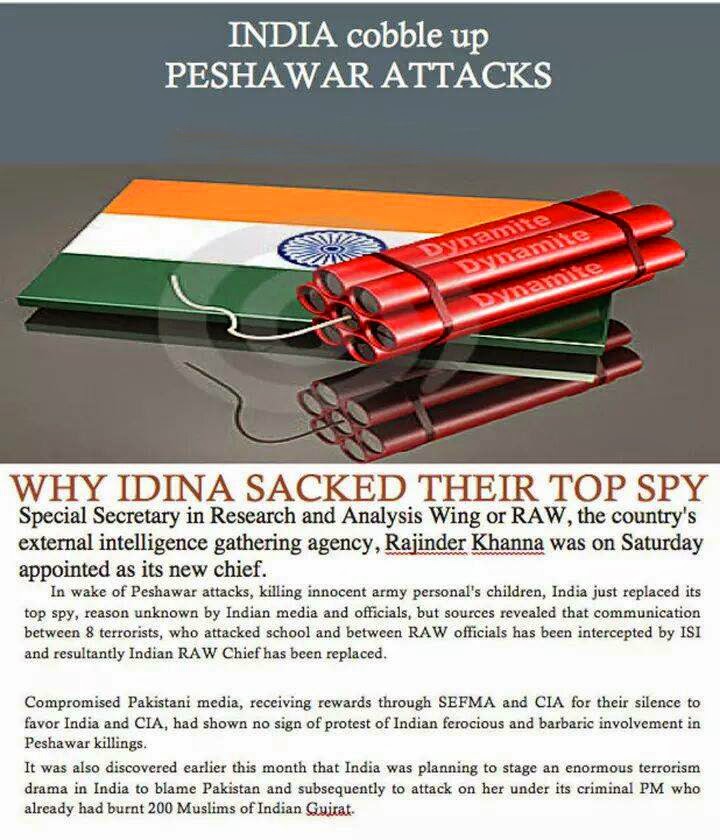 Ashok Joshi, Chief of Indian terrorist agency RAW was changed and Rajinder Nath was appointed as new Chief as a reaction of General Raheel’s visit to Afghanistan. Here I would like to mention 2 day long visit of John Kerry on 11th January 2015 to India; during this visit Kerry had harsh talk with Modi over the issue of Fazlullah. Although our media had not given any coverage to this story however, a detailed report is present over Daily Mail dated 14th January 2015 “Kerry Snubbed Modi over Mulla Fazlullah Patronage” in reference to Christina Palmer and Anjali Sharma. In this report it has been disclosed that situation grew tense between high profiled envoys between USA and India when Modi denied any links with Fazlullah and forwarded excuse that a 2 minute silent was observed in the both houses of India and India was shocked over this tragedy. According to Daily Mail, John Kerry and his team showed some hard evidence of nexus between Fazlullah and RAW. During this meeting the American side also mentioned dirty role of Ajeet Kumar Doval, National Security Advisor of Modi and especially one of his speeches in which he is proudly stating that TTP has no link either with religion or Islam; they are easiest to buy, just raise the price and they started working for India. According to the report it was Americans made this clear to Modi that USA was going to declare Fazlullah as a terrorist and India will have to end her links with TTP terrorists and tame RAW to limit its dirty role in terrorism in Pakistan through Afghanistan. If India continued her role and links with TTP terrorists and terrorism in Pakistan then this would not only effect US-India ties but visit of US President Obama as well. According to the Daily Mail report, John Kerry had given a clear message to India that if she wants to limit Obama’s visit to mere photo-session then India may continue her terrorist activities. Perhaps this was the result of threat given by Americans to India that for the first time a tornado of allegations and propaganda was not observed against Pakistan over US President’s visit to India…