ISIS (داعش) has no Presence in Pakistan!!! 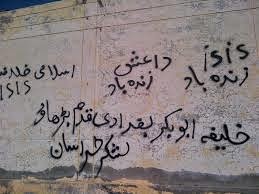 Public is worried over the announcements of few groups of TTP, statements of some politicians regarding presence of ISIS in Pakistan and “Wall Chalking” of ISIS (داعش).  Moreover, the news reports of the media were accepted to be true by public that if TTP can be present in Pakistan then why not ISIS. The attack over Army Public School Peshawar on 16 December 2014 and the brutality of the terrorists had also made public afraid. The plan of terrorism in Peshawar school was being controlled from Afghanistan because after successful operation and fierce surgical strikes of Pakistan Air Force in North Waziristan had destroyed infrastructure of terrorists in Pakistan and they are not capable to get launched from Pakistan.

Before discussing the issue of ISIS, I would like to show you the terror war waged in Pakistan, from another angle. On the arrival of US President Obama, a Muslim student Afsheen Irani raised  question “Why is Pakistan so important and ally to America so as America never called it a Terrorist State” during the meeting of Obama with students of HR College of Commerce, Mumbai. In response to this question Obama said that this is a separate discussion. But the question which was raised on the will of Indian secret agencies, we need to understand this Indian Mindset because is the only country of the world in which seven thousand soldiers and more than fifty thousand unarmed people have been killed not in a war but the terrorism waged against Pakistan by foreign powers.  And India wants to declare Pakistan as a terrorist state after waging terrorism in Pakistan???

When one listens to the briefing given by Ajit Kumar Doval, ex Chief of Indian IB and National Security advisor for Modi;  Indian goals behind ongoing terrorism in Pakistan and Indian diplomatic policy against Pakistan based upon lies and propaganda becomes clear. Ajeet Kumar Doval says, “we have adopted the war strategy of Defensive Offense against Pakistan. This strategy means that we act or attack those areas from where we have threats. As Pakistan is a nuclear power so an open aggression or naked attack that would lead to nuclear conflict is not possible. But when we talk about Defensive Offense, Pakistan’s internal stability, peace, law and order, politics and economy are on target. It also includes making Pakistan secluded on the international level (through propaganda), making Pakistan unacceptable in Afghanistan and creating hurdles for Pakistan’s relations with other countries, sabotaging internal security and stability. It is not possible to discuss the details here”.

“When we act on such policy, it is to realize Pakistan that if Mumbai attack like activity is repeat then Pakistan will have to lose Baluchistan just like East Pakistan for which neither we need to use weapons nor the army. In Pakistan more than forty thousand people have been murdered by Taliban in last two and half years, more than three hundred soldiers along with four Colonels were kidnapped; in such a situation Pakistan is confused and unable to tackle this situation. We are threatened that if Taliban get successful in Pakistan they will target India;  I would like to say that we do not need to be afraid of Taliban, when they will target India we will see them but at this time let Pakistan taste the brutality of Taliban”.

USA wants to stop Chinese access to Arabian Ocean via Gwadar while Indian target is Pakistan’s stability. When Indians talk about the strong influence in Afghanistan they are not wrong. The recent example is the rumor by the Afghan secret agencies over killing of TTP Commander Mulla Fazlullah, which was published by the Gulf News by the name of its editor as the newspaper did not bother to verify these rumors. The purpose of such rumors was to deceive Pakistan and protect TTP leadership so that bloody game of terrorism might be flourished in Pakistan. As long as the wall-chalking of ISIS and presence of supporters of ISIS is concerned this might be a reaction spread among terrorists after destruction of their hideouts in North Waziristan and unity of the nation against terrorism. Including Pakistan in the province of Kharasan in the map issued by the ISIS is something that needs to be addressed. Few elements of Pakistan are getting interested in ISIS being unaware of goals behind its presence in Syria and Iraq and role of CIA, MOSSAD and MI5 in the ISIS. India wants to exploit this interest so that terrorism in Pakistan could be continued after destruction of terrorists in infrastructure in Pakistan and diminishing identity  of Taliban and Al-Qaeda…