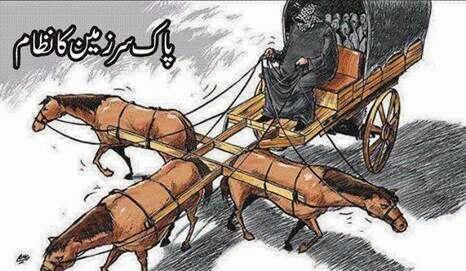 What will happen? What is going to happen? When will protests end? Every Pakistani is concerned about these questions, people are getting nervous. In addition to this the irresponsible statements by Govt. Ministers and leaders of protesting parties are adding fuel to the fire. Whole nation is suffering with the fear of some big human tragedy. Obviously, the death of a single life due to political disputes is nothing less than a tragedy. But a little mistake or crackdown by govt. on protestors would lead to big tragedy; on the one hand protesting parties are struck to their demands that Prime Minister should resign and system should be changed but govt. has started crackdown / attacking protestors; Govt. has wasted time in the wait and see policy. On this situation Pakistani media had been divided into two different groups and busy in running commentary to public; exposing mutual rivalries of media houses. TV Channels have stopped their routine transmission to present live coverage of the developments in Capital or other cities. Moment by moment analyses have forced protestors and govt. stick to their stand and forced public into chaos that what would happen next? Irony of the fate is that AMAN KI ASHA brand media is blaming Pakistan army and ISI as script writers of the whole situation through suspicious gestures in its talk shows. These talk shows and accuses are being run on the same line as they did after an anchorperson was injured in Karachi while army had already taken over the security of important buildings had cleared that army will defend these buildings that are national property. On the other hand army appealed both parties to diffuse the situation through patience, foresightedness and insight. 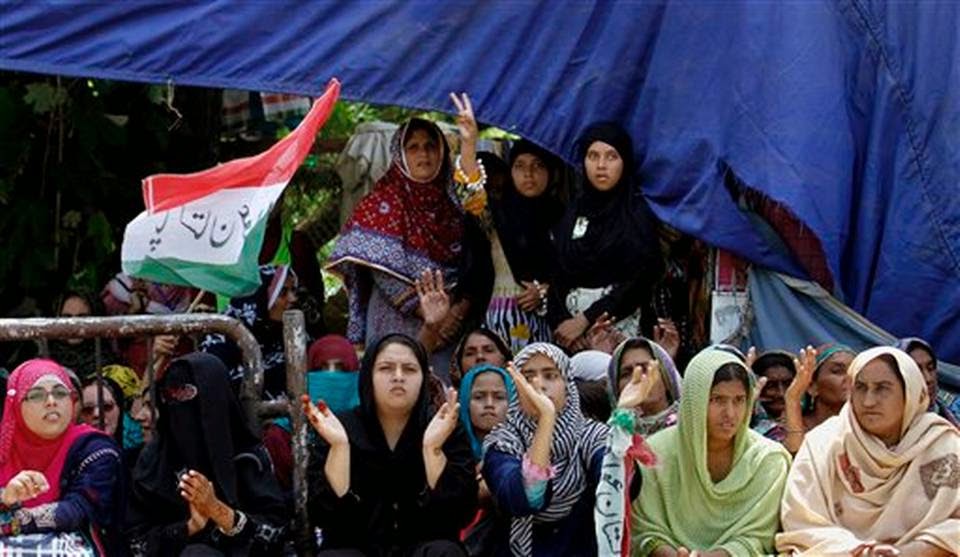 After statement by army; protestors made it clear that damaging buildings aside they will not break a single flower pot. However, if govt. tried any misadventure, operation or crackdown then controlling protestors would be impossible. Look at the foresightedness of govt. they are satisfied after getting resolutions getting passed from Parliament for protection of democracy and considering that demands of protestors have lost value. They were of the view that Imran Khan and Tahir-ul-Qadri and the protestors would get tired but protest demonstrations after 14th August 2014 have proved that no decrease in passion of protestors for Azadi and Inqilab March have been observed. As soon as protestors reached Islamabad they arranged shelters from weather etc. which shows that protestors are not ready to leave their leaders at any cost. As a retaliation to the protest Govt. arranged rallies and protests by workers of Pakistan Muslim League – N (PML-N), the ruling party; these rallies started from Multan by attack over the house of Shah Mehmood Qureshi of Pakistan Tehreek Insaf (PTI) afterwards workers of PML-N came on roads in other cities as well. Protests are there but what would be the consequences of the retaliating rallies in spite of political solution. Unbiased are concerned over this situation and claiming it as threat not only to democracy but motherland as well.


Had this situation emerged suddenly? Offers by ruling party for solution of current political chaos or electoral reforms are out of time; why these actions were taken before the lapse of time? Leaving aside the disputed elections 2013 if we look at the performance of current govt. it is disappointing. If current govt. is intoxicated with the heavy mandate of public; they should keep it in mind that it was due to the poor policies, high inflation, increased crime rate etc. of last govt. which current govt. has taken as a certificate merger (friendship) with Hindu India in spite of resolving problems of public. Current rulers’ affiliation with India had won the support of AMAN KI ASHA brand media for govt. as well. With the oath taking of current politicians, a specific media group broke all records to defame Pakistan army by propaganda over missing persons, Ex-President and Chief of Army Staff General Pervaiz Musharraf was portrayed as traitor and discussions were on the air to hang him for treason. According to this media group many govt. ministers also crossed all limits to hang Musharraf. 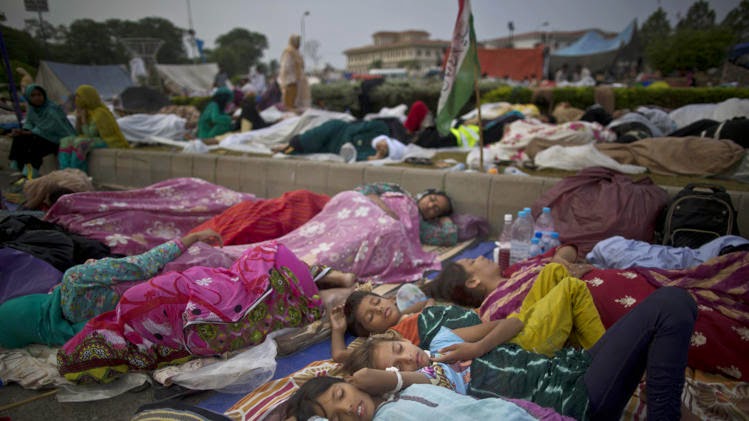 In the case of Musharraf, govt. wants to hang him alone excluding all those who were involved in the imposition of emergency as soon as possible under the accuse of treason which jolted legal experts because on the other hand govt. either being afraid or due to some secret reason wanted to negotiate with TTP terrorists and was not ready to execute 480 terrorists given death sentence by courts for terrorist activities. This govt. wants to execute Musharraf, start free trade with India ignoring Kashmir dispute, all other national disputes, and Indian interference (terrorism) via Afghanistan created an expression of dispute between army and current political govt. This was the duty of the govt. to remove such expression by supporting Pak army that is indulged in the final stage of war after a decade long war against terrorism, however, Govt. was seen standing with the media involved in propaganda against Pak army and security agencies of motherland. During this BJP came into power in India which has already nominated Narendra Modi as Prime Minister who is notorious for massacre of Muslim of India.

On the oath taking ceremony of Modi, Nawaz Sharif impatiently participated in this ceremony, Mr Nawaz had time to meet various envoys and Hindu film stars but denied to meet Huriyat leaders of Indian Held Kashmir. Whether it was for the friendship (merger) with India at any cost or something else but India took denial of Pakistani PM to meet Huriyat Conference leaders as a signal by Pakistan to step back from Indian Held Kashmir. This illusion of India over Pakistan’s policy for Kashmir was shattered when Pakistani High Commissioner for India held meeting with Kashmiri leadership in New Delhi. As a reaction over this meeting India cancelled scheduled meeting Foreign Secretaries which was to be held on 25th August 2014. Not only this; India also roled back the development for peace between two countries.
This did not end here; workers of BJP staged protest demonstrations against Pakistani High Commissioner. Indian Foreign Ministry adopted threatening attitude towards Pakistan which was disliked over the international level, however, US and UK dislike over Modi’s policy for Kashmir is orally only. The relations between both countries got a twist when an Indian lawyer Sushail Kumar filed a case against Pakistani High Commissioner in the court of Magistrate grade-II of District Allahabad under the allegations that meeting of Pakistani High Commissioner to Huriyat leaders in spite of being restrained by Indian govt. falls under conspiracy against India which accounts to treason. Female judge of Indian court has fixed the date of hearing on 5th September 2014 in which evidence would be presented in the court, in order to examine evidence and that what punishment could be given if allegations are proved. Huriyat leadership of Indian Held Kashmir had been already arrested. However, India failed to do anything against Pakistani High Commissioner except trying to pressurize him. But the bitter reality is that a new wave tension between both countries has been started by Hindu India. Extremist Hindu army has increased violations over LoC and working boundary against civilians. In this way whether it is internal or external situation, Pakistan has been forced in such a cross road from where each road leads to a dead end. It is possible before publication of this post operation against protestors might have been started or status quo is maintained but one does not see any resolution of common man’s problems. Public has been pressed so much hard in indirect taxes and underemployment that if they pay utility bills nothing is left for food and if they buy food they have to forego the electricity that is already pregnant with power cut offs in the name of load management but bills are ever increasing. How can they afford education for their children, medical services etc. On this situation of public, govt., opposition and protesting parties; all have no solution. 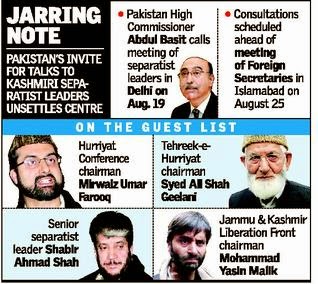 In the end I would like to reveal that Ms Asma Jahangir has been appointed by UNO to find out violations of Sri Lankan army in Sri Lanka in war against Indian terrorists in Sri Lanka that were crushed by Sri Lankan army. Sri Lanka is only country of this region that openly stands with Pakistan but imagine what would be the situation of relations  between Sri Lanka and Pakistan  when Asma Jahangir would present stories of human rights violations fabricated by India; would discuss this in next week…