External Forces Waiting for the Involvement of Pakistan Army in the Karachi Operation!!! 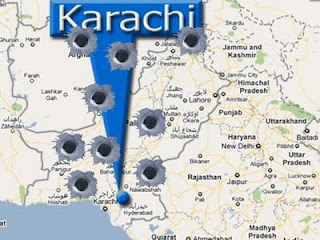 Democracy is back to its trail; Army is keeping away from politics and govt. issues; media is appreciating Indian culture and promoting Indian movies as a proof of being a FREE MEDIA and also keeping public abreast of all the happenings within the country. The evidence of free Judiciary could be imagined from the suo motto actions taken by Supreme Court; but in spite of all this the condition of public is deteriorating day by day. The poor situation of law and order that is prevailing now in the country has never been observed before, inflation, hoarding, black-marketing, assassinations, abduction for ransom, dacoities and robberies are increasing day by day. Especially the life of residents of Karachi has been made hell. When they get out of their homes to earn livelihood they have little hope to return home alive. The situation has not deteriorated so far in one or two years but this is a result of criminal negligence of rulers of the city for which these political parties who won the elections with heavy mandate did not take any action on purpose. Despite of being in power for long time these parties did nothing to crush the criminal elements within their parties but supported them in order to threat their rivals or murder them. It seems the purpose of political parties was not resolve the problems of the public but achieve power and money by coming into power. The extreme is that now Bhatta Khor (Extortionists) are now collecting extortion money just like as Tax department. If we compare these extortionists with War Lords in Afghanistan than this would not be wrong who receive extortion money not only on trade but on lives as well.

Due increased murders and abductions for ransom in Karachi during a suo motto action Chief Justice of Pakistan had said in the comments that different political parties have established armed wings/gangs that are involved in such activities; law and order could not be restored unless these gangs are not dismantled while influence of political parties in Police is also another reason of the deteriorating situation in Karachi. However no one out of the three big political parties is ready to accept presence of their militant gangs despite of all the evidence while in the talk shows they speak in such a deceptive way that no one is more noble than them and their party. They act as they do not what is extortion or what is known as criminal gang. All politicians blame others for criminal activities but they ignore that while pointing towards others rest of the fingers point towards themselves; all of them want peace but they want that in the operation the area where there supporters reside should be exempt.
Before we used to hear about war gangs of PPP, MQM and ANP but now another name has entered into this list from last few years which are being claimed as all the three parties as threat to stability of Pakistan. These political parties forgot that when they try to get power through weapons and arms than someone would come to overpower them. The presence of Taliban in Karachi may not be denied but Karachi has been deprived of peace and tranquility from last three decades. This is why demand for military operation started in 1990 and in 1992 the operation was conducted which was made disputed afterwards. Like many other steps taken to restore peace 1992 operation is still disputed however those 162 Police officials who participated in this operation are being murdered on which not Sindh govt. kept silence but never dared to trace out the murders of these officials and punish according to law. It is evident that these political forces have pushed Karachi 2000 years ago when cities were captured and controlled through power and the persons murdered in these wars for power had no value more than a pawn that were thrown away after their death.
In the light of the situation newly elected Federal govt. seems to be serious in restoring the peace in Karachi for which Prime Minister (PM) held meetings with traders and businessmen whose majority have left Karachi due to extortionism but all the efforts of PM were rolled back when a very noble and dutiful official Inspector General of Police was deputed in Sindh by Federal govt. but on the protest of PPP this decision was taken back. This disappointed all those who wanted peace in Karachi while all the parties during their meeting with PM demanded peace in the city. In this APC (All Parties Conference) MQM demanded that Karachi should be handed over to Pakistan army; now whether MQM was afraid of Taliban that Rangers and Police would not be able to confiscate illegal weapons or there were some hidden goals, this would be decided by the time. However the statement of DG Rangers Major General Rizwan is of grave importance that Karachi could be turned into a heaven of peace within a month but there is absence of POLITICAL WILL. This is a very important point that has answer to many questions regarding the law and order situation being faced by Karachi. The Captain of operation against criminal gangs is Chief Minister (CM) Sindh that has been in power for last five years in Sindh; so his efficiency is evident to everyone. Police is under his control while Rangers is not allowed to take any action against criminals without permission from Govt. of Sindh; in the other words if Ranger wants to operate in the area where PPP persons are present than operation would be delayed or the armed persons would be ordered to leave the area before Rangers arrives in the area.
Moreover, so much propaganda has been done on the Operation against criminals that if any criminal is still present in the area than his supporting would also like that he should be punished for his foolishness. Majority of criminals would have been already shifted from Karachi to other parts of country or went abroad to enjoy the black money they earned. Many analysts are expressing concerns over the success of the operation despite of the seriousness of the Federal govt. Moreover principally in spite of the reports of influence of political parties in Police the control of the operation is not being handed over to Ranger; the possibilities of a just and successful operation are rare. Otherwise DG Rangers would not have complained that Rangers arrested thousands of criminals which were set free by the Police. Despite of apparent good relations between Federal govt. and Govt. of Sindh the situation is that Sindh Police has been deployed on the security of ex-President Asif Ali Zardari in Lahore in spite of Punjab Police.

Before operation in Karachi a code of conduct should be formulated for the media that live coverage would not be allowed and only reports issued by govt. should be telecasted. Otherwise the result would not be different from Laal Masjid Operation for which first of all few anchorpersons blamed Laal Masjid extremists as B-team of Pakistan army to pressurize govt. for operation; an anchorperson earning his livelihood from AMAN KI ASHA certified for treason by Bangladesh made a deal in the presence of Asma Jahangir and Aitzaz Ehsan that if govt. starts operation against extremists than media would provide full support but the dirty role played by media right after the operation was witnessed by the whole nation.
In the end I would like to quote excerpt from the article written by ex-Commander Pakistan Navy Admiral Muhammad Afzal Tahir from 2005-2008 that was published on the internet with the title of “Karachi Operation” in which he has expressed his concerns that in case of failure or prolonging of operation the demand for use of Pakistan army would emerge which could be a part of  pre-planned conspiracy of foreign forces, so army should keep away. He writes,
Pakistan Army! I implore with you to what is necessary remaining in the background. Do whatever but do not fire a bullet as that action will unleash the international demons that have hunted Libya and Syria. Please do not listen to these demands as this is surely a trap. May Allah help our country.