Trial of ex-Army Chief is Trial of Armed Forces Infact!


Public was hoping that after dark night of 5 long years a new dawn will appear; all the difficulties that were inflicted upon them in the name of DEMOCRACY would be remedied. This hope made public to take part in the electoral process but when the results of elections were announced they realized that all of their hopes have been stolen and party playing the role of friendly opposition from last five years has succeeded with a heavy mandate. Public hoped that long absence of PML-N from power would have made it aware of problems being faced by public and would utilize the mandate to redress the problems of the masses.
In contrast to all these hopes newly elected govt. imposed tax on everything except breathing in such that a way that life has become nothing more than a punishment. On the one hand there is inflation, unemployment, terrorism, adulteration of goods on the other hand the utility bills of electricity and gas in spite of load-shedding; moreover as  a planning for the upcoming holy month of Ramadan blackmarketers and hoarders have increased the prices of the necessities. This was the duty of the newly elected govt. to resolve the problems of public and provide them relief but in spite of fulfilling their duties as elected representatives of public they are wasting all their energies to take their personal revenge. Their focus is only upon getting ex-Chief of Army Pervaiz Musharaf declared as traitor and punished from court; without ever considering that there is a big difference between a Chief of Army (even if he has been retired) and a leader of a political party. In Pakistan the loyalty towards party leader is not based upon ideologies, sect, and motto, service towards public or principles but on the basis of personal interests. While in the army from soldier to General the Chief of Army is like a pillar supporting the building over it and if this pillar gets weak or falls down whole building would fall down as well and our rulers are leaving no stone unturned to get ex-Chief of Army declared as Traitor.

Leaving aside modern era even in pre-medieval times the success, bravery and valor of army was conditioned with the safety of the Commander and this was the reason that Commander of the army had been always the target of the enemy. As soon as the commander fell from the horse after getting hurt or murdered; the army that had been considered undefeatable before his death would lose hope and courage because they considered death of their commander as their defeat; this is known as Morale now a days. This is why it is said that in the battle field soldier does not fight with weapons he has but with the morale. Those analysts, anchor persons targeting Army over TV Channels in their talkshows or politicians succeeding on the basis of their money, power who consider army as a threat to their corrupt rule will never understand and give importance to morale. This is why in spite of being inevitable for integrity and stability of nation armed forces have always been unacceptable for a specific group of journalists and politicians. Murder of Akbar Bugti, Laal Masjid Operation, arrest of Judges or Emergency of 23 November 2007 are just lame excuses; there are only two reasons behind trial of Musharraf 1) the overthrow of Nawaz govt. in 1999 by army and 2) exploiting the opportunity to defame Pakistan army (which has been always dream or plan of India). According to recent survey majority of Pakistani public thinks that actual reason behind the trial of the Musharraf is the revenge of present govt. because if the real purpose behind this trial is to punish dictators than this should start from the first dictator not General Musharaf only should be selected. Public have concerns regarding role of higher courts as well because justice is not expected as due to lack of evidence against Musharaf regarding house arrest of Judges his bail has been approved. On the other hand respected Judges are not ready to start trial against General Musharaf from 1999 because they have themselves certified acts of General Musharaf in the favor of national interest. 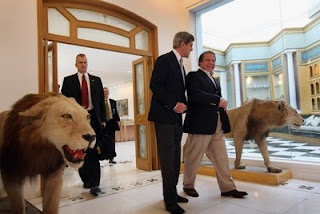 Moreover, except few lawyers active for freedom of judiciary and lawyers attached with Nawaz Sharif other notable lawyers are agreed that there is not a single allegation or case against Musharaf for which he might be punished. Than what is the purpose of these fruitless trials against except Musharaf to disrespect him so that army could be defamed and morale of armed forces could be devastated. Yes armed forces are the target! Those armed forces that not sacrifice lives during war but during natural disasters as well.

As long as the allegation against Musharaf for imposing emergency is concerned those lawyers following trial against him and politicians expressing happiness over progress in this trial should not forget the past; on 21 April 1977 self-proclaimed Proud of Asia and only Civil Martial Administrator of the world’s history Mr. Zulifqar Ali Bhutto imposed emergency and three major cities of Pakistan were handed over to armed forces and ordered army to crush the public under tanks. They should also remember the emergency imposed by Indira Gandhi on 23 July 1975; was Indira Gandhi declared traitor after that?

The purpose behind this post is not to support dictatorship or oppose democracy but we should not forget bitter ground realities as well that force armed force to take over the govt. and people disburse sweets regarding dictators as saviors. If our politicians want to stop the way of dictators, this could not be done by punishing Musharaf but they will have to change themselves. The recent headline of newspapers in which Supreme Court had to address politicians, “For God sake save national treasury from misappropriation; members of assembly are elected for legislation not for corruption”. 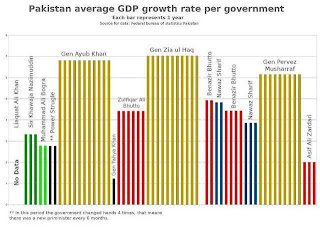 Those supporting the trial against ex-Chief of Army should must keep this in mind that for a soldier there is nothing more disgusting that his Commander is regarded as traitor or is involved in treason because according to a soldier treason means under hand deal with enemy. This had not been done by any General in the history of Pakistan however one may find names of many notables from politicians. Anyhow our rulers fond of mummified lions should not forget that at that time Pakistan army and public both are in the condition of war; our army is fighting against external forces in the form of terrorism to safeguard motherland while our public is fighting against inflation to make both ends meet but our elite are not concerned for these wars…