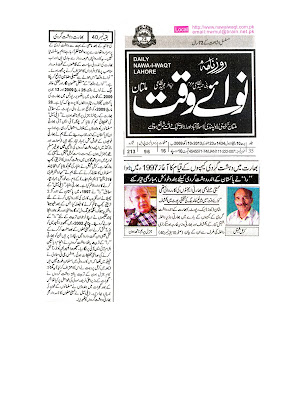 What Indian Interior Minister Sushil Kumar has revealed now supported by the statements of Indian Foreign Minister and Interior Secretary for reaping political benefits, we had disclosed that heinous role played by Indian Army, Indian Terrorist Agency RAW and Hindu Extremists in 2009 through the columns written by Mr. Khalid Baig published in Daily Nawa-i-Waqt. Here we would like to repost the links of these posts unveiling the heinous face of Hindu Terrorist India...

Here we would like to quote just a paragraph from our column "Talk About "General Hoon", Not of Colonet Saadat-ul-llah;

“General Premnath Hoon” is such character of Indian army who laid foundation of terrorism in Indian army in the name of enmity for Islam and Pakistan. Although till then world was aware of few names like “Lt. Colonel Shrikant Prohit” who were responsible for blasts in “Samjhota Express” and Maligaon, and were arrested in the hands of Maharashtar ATS (Anti Terrorist Squad) Chief Hemant Karkare. But alas! Hidden terrorists in Indian army “RAW” and Bajrang Dal murdered Karakre otherwise many other dozens of Indian army officials would have been behind the bars.

Please follow the above given links to read more...