The Dragon of Sectarianism could Engulf the Integrity of the Motherland! 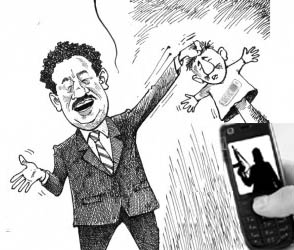 As soon as the moon of Muharram (first month of Islamic calendar) is sighted the shadows of fear and uncertainty cover the country. The incidents of terrorism occur whole year claiming many lives but during this holy month these incidents of terrorism increase manifolds becoming a source of shame for Muslims and Islam i.e. religion of peace. There is no doubt or second opinion that Islam stresses upon equality, forgiveness, kindness and safety of everyone than how is it possible that we who Believe in One Allah and Prophet (PBUH)  cannot live together with harmony and peace?

During the dictatorship this might be accepted that due to lack of coordination between govt. and public the disputes cannot be resolved through discussion/negotiation but from last four and half years elected public representatives are ruling the nation and Parliamentarian system is fully functional in the country. The elected govt. could have resolved sectarianism or sectarian disputes isolating and incapacitating those who fuel sectarian disputes. But public has observed that elected representatives are not ready to unite than how can they be one on sectarian disputes? As a result those elements who are working to fuel the disputes between sects get encouraged and whole country has been besieged in the hands of terrorists and extremists. Terrorists, militants, and anti-Pakistan elements have succeeded in creating such an environment due to which Interior Minister Rehman Malik had to suspend the mobile phone service for two days. Is the cutting of the links between the public is the only solution left to curb terrorism.

No doubt human life is more precious than anything else in this world and the suspension of mobile phone service saved many lives but this is not the proper solution for such a complicated problem of terrorism. There is a whole mechanism of internal security in the country but nation is observing Interior Minister could not do anything except to announce to the public that terrorists have entered into this or that province or so many cities. He is so much negligent that on last Ashura (10th of Muharram) he thanked terrorists through his press conference in media for suspending their terrorist activities during the Ashura; he had not only to face the criticism over this but this also provided a chance to Afghan govt. to blame Pakistan for terrorist bomb blast in Herat and repeat their propaganda that terrorists have safe heavens in Pakistan demanding ISAF to take steps against the shelters of terrorists in Pakistan. 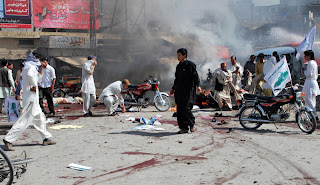 The ban on mobile phone and motorcycle are temporary measures to achieve temporary success but not a proper solution. Furthermore terrorists unveiled the measures by govt. to handle terrorism by implanting bombs in trash and through remote control bomb blasts. In these bomb blasts many innocents lost their lives who had not even known that what was their crime (except being a patriot Pakistani and Muslim) for which they were slain with such brutality. If the reason behind these terrorist attacks/murders are Sectarian disputes than look at the figures, many Sunni’s lost their lives as well along with Shiites. This is evident that problem is not in the sectarian disputes but foreign hand is exploiting this so called sectarian difference against trying to force towards civil war. In the normal days Shiite Muslims are specially targeted in and Gilgit while in Muharram Alharam the target of terrorists is to create big sectarian dispute by targeting mourners in any area of the motherland. If these disputes were between public than probably riots might have spread in the country after such terrorist attacks but this is not so; believers of both the sects have not only relationships with each other but friendships as well; both participate in happiness and woes of each other. On the ground level no trace of such sectarian dispute is visible and that is the reason behind the failure of anti-Pakistan elements in spite of brutal activities of terrorism. But this could not be deemed as adequate because the human life is the most important and precious thing; this could not be allowed that dozens of lives become target of anti-Pakistan terrorists in the name of sectarian disputes or extremism. Ask that mother whose son went from whom with smiling face but returned back in the form of mutilated corpse; how much her soul would have been hurt? The back of a father is broken when he hears of the death of his son; what is the crime of that young widow who is waiting and mourning for her husband along with her infant; the widow whose own life has been forced into dark what would she tell her baby that where is his/her father? Why only Shiite or Sunni; Islam orders and guarantees the safety of life, property and esteem of followers of other religions even atheists. 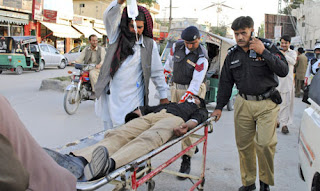 This is not a problem of the ten days of the Muharram after which different politicians and ministers congratulate each other that nation has been saved from bigger loss by suspending mobile phone service. The need of the hour is that mutual harmony between sects should be utilized in such a way that foreign agencies/terrorists could not exploit sectarian disputes. Otherwise were there mobile phones in 1980s that whole country was jolting with bomb blasts? Why nation has forget the tragic bomb blast in Bori Bazaar of Karachi or terrorist activities over bus stations, railway stations or other public places were conducted with the help of the mobile phones at that time? Moreover Indian terrorist Sarabjeet Singh (for whose release from Private TV channels to so called torch bearers of human rights and NGO’s are leaving no stone unturned) had also utilized remote control bomb. The only difference is that in past they had to send in their own agents for terrorism but now they have agents within for their attacks over worship places, markets and govt. buildings and suicide attacks over security agencies of the motherland. This should be also kept in mind that during this Muharram too much hoax and threat was created as compared to previous Muharram processions; not only bombs were blasted in , and D.I. Khan but many bombs were diffused as well. The reason behind this was the D-8 Conference of Muslim Countries in exact those days of Ashura in Islamabad hurting those who portray Pakistan as a failed state on the international level. Through these terrorist attacks an attempt was made to keep Pakistani media away from giving coverage to the activities of the foreign guests visiting and our enemy succeeded in this to much extent. Only print media gave coverage to the activities of the guests but our free private media was busy in spreading the desperation through giving coverage to terrorist activities ignoring the D-8 Conference. So the positive message that could have been sent to the external world by the D-8 Conference, ( leading the conference) was buried through the neglect of media as well as due to terrorist activities. Here I would like to mention the Prime Minister of Bangladesh Haseena Wajid who conditioned her visit to with the apology from Pakistani side over 1971. As a member of D-8 Haseena Wajid should have participated in the D-8 (Developing Eight) Muslim countries and moreover this demand for apology after 40 years could be on the will of not the members of D-8. This demand was far away from the goal of the D-8 (Developing Eight); an organization that was founded by late Prime Minister of Turkey Necmettin Erbakan with the goal of guiding Muslim states towards independence in defense, Science, technology and economic welfare. However this should be also kept in mind that in the D-8 conference held at Bali when all the Muslim countries had agreed to sign the pact for free trade it was that has sabotaged such an important deal by objecting it and denying to sign the deal while Bangladeshi economy has needed this. But as deems this deal unfit for her trade interests with so it was impossible for to go against the will of and now the absence of from this conference is also linked Indian will as well. 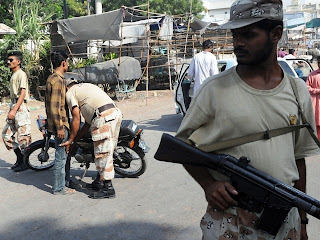 Whether these are terrorists attacks over Sri Lankan team in , or other terrorist activities all have a prominent factor of professionalism, showing a very well equipped agency behind them forming a chain from distraction of cricket to sabotage of free trade agreement to absence of from D-8 conference in . Anti terrorist agencies and other law enforcement agencies are working against terrorism but for religious harmony between different religions/sects it is necessary that from Parliament to town and street level different committees consisting of Religious Clerics and representatives from all schools of thoughts should be established to create an environment of peace and harmony to defend the motherland against the conspiracies of anti-Pakistan elements and powers. This should be kept in mind whether these are facilities of being in power as ruler, respect, or status all this is due to the ; this is OUR country and the integrity of this country is the only guarantee to OUR survival…