Murder Of Innocents By So Called Cultured Nations


According to the news reports by the international media an American Sergeant entered into three houses in a of district in and murdered sixteen innocent Afghans including nine women and three children, while many other were injured. Reacting over the deaths of the innocents Afghan President Hamid Qarzai issued the statement that firing was pre-planned and unprovoked. In order to explain the position of US terrorist involved in this incident US representative was called upon. According to news agencies President Obama called Qarzai to express his condolences and sorrow over the incident as soon as he got the news reports. He gave (fake) assurance that the criminal will not be spared and brought to justice. In the meanwhile BBC took the steps to cover up the crimes of US terrorist that he was under severe depression and mental disaster. However after fulfilling his duty as a state terrorist he handed over himself to officials (higher ups of terrorists). Because on the same night Taliban attacked US military camp in Bigram with rockets killing unknown number of foreign invaders and crusaders. Although officials did not disclose the number of casualties but the reports of attack had already been arrived into the (and US troops decided to take revenge from unarmed Afghans as they could not dare to face freedom fighters).

This was the summary of the news reports presented by different western terrorist media over the massacre of 16 Afghan citizens. These reports clearly show that international terrorist media tried to twist and hide the facts. Because the reports shared by the PRESSTV.COM are bit different and more detailed. According to the website alleged terrorist belongs Naval Seal Team, under the command of ISAF. He was appointed 3 months ago into the American military camp at Panjwai district. During his service tenure of eleven years he had spent three years in . So this was not first time that he was separated from his family and got psycho to murder innocents as Western terrorists media is posing. This bastard is also father of three children.

According to the PRESSTV.COM American terrorist left the camp at approximately 3 o’clock at night and arrived at a Ballandi village one kilometer away from his camp. He entered into the three houses, shot dead their inhabitants, gathered dead bodies, covered them with blanket, poured kerosene over them and set them on fire. After such terrorism and barbaric brutality he returned back to his camp calmly as he was fully confident that no action will be taken against him (perhaps he was ordered to do so). Website also claims that alleged American soldier/terrorist was wearing traditional Afghan dress that is why security guards could not see that he was carrying any weapons.

According to an eye-witness Muhammad Wazir (his father was murdered in front of him) American soldier was wearing commandoes like dress, he took aim by touching one his knees with ground, then moved forward for few yards, looked right and left in order to see if anyone was about attack him. In the same way he peeped into the room for animals and went away. According to Muhammad Wazir the sounds of bullets were heard, his father woke up to check and became the target of American state terrorism. According to the news reports from , people were not only murdered in this village but in another village named as Olakzai 500 yards away. These were reports were also verified by the statements of Afghan freedom fighters (termed as Taliban by western media) that the murderers were more than one and number of people murdered are also more than fifty. Those who became target of American target terrorism 12 out of them belonged to the same family. Taliban has also uploaded video footage, recorded by a mobile phone before Afghan administration or US troops arrived showing three houses affected houses in a row.

In this way if we look at the contradicting statements of US officials and reports of media it becomes evident that murderers were more than one. Because American commanders have failed to provide any acceptable explanation that how a Sergeant succeeded in getting out of the base camp along with weapons and night vision without their knowledge? He succeeded to get out of the base camp in Northern Qandahar; stronghold of Taliban where lives of American soldiers are at stake even in the day, then why did they allow a soldier to go out alone risking his life? Why did not security guards stop him? If they failed to stop him why did not they inform higher officials? When he arrived back why did not security guards question him while they have heard the sounds of firing nearby? Why American commanders did not react to the noises of firing nearby while this might have been Taliban preparing for attack on US base?

In 2009 Obama ordered a special operation in in order to defeat Taliban; a military base was established in the Panjwai district by ISAF. This is another thing that Americans badly failed to defeat Taliban in that area and were forced to be limited to their military forts at night. So there is another possibility that ISAF commanders started the operation on fake/false Intelligence reports (as they attacked ) and when they realized that they have murdered only children and unarmed men they tried to fabricate a different story to cover their terrorism and war crimes. So they ordered the dead bodies to be gathered and burnt. Otherwise there is no explanation for burning dead bodies of children and women (except they have been gang raped as terrorists are mostly involved in such grave crimes), even American psychologists could not forward any logic for this. The second question that comes to the mind is does a single soldier had enough courage and capability to operate in a Taliban stronghold? While in order to gather corpses he should have put his weapon somewhere or behind his back, during this was not he susceptible to be attacked?

Now the situation is that afghan govt. demands the murderer of 16 people to be dealt according top Afghan law but habitually is not going to accept this and has moved his terrorist out of . Americans are repeating the same old rhetoric to befool the public that army has internal rules and regulations to punish culprits. But alas! They do not have any evidence to support their claims. No war criminal or terrorist indulged in gang rapes, genocide in , or have ever been punished by army or American courts. Recent example of Raymond Davis who was red handed by police after murdering two persons, Americans took his arrest as challenge to their international dictatorship. When he was released by Pakistani govt. under pressure from govt. with the assurance that his trial will be held in court, but govt. denied to take any legal action against him and gave responsibility for arranging terror incidents in from .

Now in order to save their newly exposed terrorist Sergeant supporter of state terrorism, Western media is posing him as psycho. Not only this, in order to befool international community other psychological tactics. For example after two days or tragic terrorist incident of murder of Afghans a drama was staged that a suicide bomber tried to hit the plane of Leon Penta with his van, but van got stuck in a mud hole and blew up. The truth is that this vehicle was not driven by Taliban suicide bomber but by a police officer, and due to some technical fault. The crew on duty succeeded in getting out the driver from the burning jeep but due to severe burns he died. This vehicle was a patrolling vehicle responsible for keeping an eye over any unusual movement near terminal. The pictures of burning jeep are available on the internet. So American media and Penta decided to spoil this incident.

Afterwards when Penta addressed his soldiers, a news was broke by the American media that soldiers were forced to leave their weapon in their barracks as Penta was afraid that some psycho soldier might shoot him. What a lie? This is an established fact that in any of such gatherings or addresses soldiers always participate without weapons. Through such fabricated news reports American media wants to cover the state terrorism by their dictators.

On the other hand human friendly Americans had started protest over massacre of 16 Afghans and are demanding withdrawal of US troops from but whether these protests will have any effect over American dictators this is another discussion. They also demand that Ex-American dictators like Bush, Dick Cheney and Condoliza Riece should be brought to trial for massacre of millions in and . Not only they caused deaths of innocent public of these countries but they also forced US soldiers to lay down their lives while they were unaware that why were they even fighting. Some Americans term their rulers as worst then Hitler, because they have surpassed Hitler, Hilaku and Genghis Khan in their enmity towards human beings. Others ask if murderer of 16 Afghans was psycho then why was he in army? Who are responsible for posting a psycho to ? 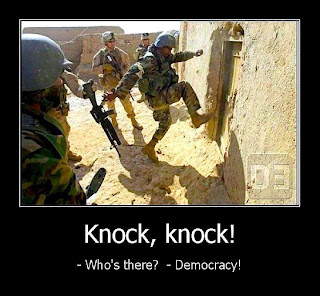 If we think over the reasons behind NATO terrorism over Salala check post, burning of Holy Quran by US terrorists and recently the murder of 16 Afghans, the reason behind them is nothing else except the fear of defeat. From General to Soldier of Allied terrorist army who entered into under umbrella of their maid UNO to drink human blood are aware that they had been defeated and an insulting retreat awaits them. Such activities show their dear of being defeated. That is why American Generals commanding state terrorists have said that such unprovoked attacks over civilian are expected in future as well. In such situation should must be on guard. Americans think army and ISI has been cause of their defeat in crusade over . They also know that two institutions responsible for the sovereignty of country are also a hurdle in the way Indian heinous plans. So that is why both of these guarantors of balance of power in are under attack by traitors receiving dollars. In such situation if an of these two institutions loses their patience or morale the results will be devastating for the whole world, perhaps the supporter of   AMAN KI ASHA want so…