Sirajjuddin: A Journalist Who Laid Down His Life But Did not Give Up his Professional Duties!

We daily observe in the talk shows of the TV channels where many journalists who had no background 5 to 10 years ago but now they have become prominent and wealthy through this change in media regulations and giving much more freedom to the electronic media in recent years. If we look at the basic qualification or feature of these anchor persons which made them so much prominent in such a short time, for most of them it is their role in spreading pessimism and chaos in the country which has lifted them to such a higher position. Whether we look at the international or national journalism it seems yellow journalism is prevailing everywhere being utilized by big powers for their specific powers. One who can surrender his morals, national, and religious values is the blue eyed child of these channels. Twisting facts, denying conspiracies of bosses of these media channels i.e. mostly world powers from west in the other world anti-Islamic powers. If these journalist work to defame and criticize our security agencies; they become heroes of our private media.  In order to fulfill their task it does not matter whether they quote fabricated facts, they are not ashamed of next day their fabricated story and conspiracy is disclosed in front of the whole nation. Actually once they complete their propaganda story they get busy in fabricated another one without looking at the flaws and loop holes they left in their previous story which may make it easily detectable as fabricated story. How much number of such stories should I quote, they are innumerable. One of such a movement to unveil the yellow journalism and forces behind them is going on with the name of “Youth Campaign against JEW TV”. 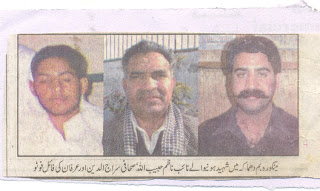 So if we look at this grave situation what does this mean that all journalists are alike? All of them have sold their soul and pens just for money and temporary benefits of this world? No! This is not true. The fact is that the evil although being little in number seems to be dominant. This is the human psychology that we think most of our life has been spent in sorrows and pains while this is wrong. If we look at the positive side we have had many happy movements but we often remember is pain and sorrow and what we could not get. So same situation is here. If we look at those journalists which have laid down their lives just to fulfill their duties, just fulfill the demands of their profession and subconscious, we will come to see such stories which at the same time not only shock us but encourage us that if one chooses to stand with the truth, to stand with the national unity, for the safety of mother land than no one can lead him astray neither through threats nor through lust. Such heroes never demand any remuneration or reward from the govt. or other institutions. Their only goal is to fulfill their duty laid upon them by their profession and nation. Although one might find hundreds of thousands of such example but today’s post is to pay a special tribute to such a hero of journalism who chose to give up his life but not to bow in front of terrorist forces, he wrote a new chapter in the history of journalism and established an example for the young journalists that compromise over the truth is not possible even at the price of the life.

Yes! Such a hero was born in Swat in the house of a School Principal. His father used to write for Jang newspaper as well. The name of this hero of journalism who embraced martyrdom as a punishment by so-called Taliban (actually terrorists funded by anti-Pakistan elements) for disclosing the truth is Sirajuddin. After getting higher education from he joined journalism and served it for at least 25 years. He had done many programs for different TV channels and worked as Bureau Chief for PTV as well. He was correspondent of, THE NATION.

After interference from the world powers present in the when Taliban established their strong hold with the support of these powers, these so-called Taliban made life real hard for the inhabitants of Swat. Many of the families fled from Swat to safe places. If we look at this time, this was the time when propaganda was going on that Taliban are about capture , Pakistani nukes are unsafe and Taliban are Islamists and so on. This was the time when including the local media, whole media was criticizing and army for allowing and supporting Taliban to build up their strong holds in Swat. After deteriorating situation and on the demand of the inhabitants of Swat when Pakistan army launched operation to crush these terrorists which was before this operation was singing chorus of links between these Taliban and army at once changed their stance and started criticizing army as Taliban were some innocent guys being recklessly murdered by Pakistan army.

In such a grave situation Mr. Sirajuddin kept on his duties and reported what was the truth behind the smoke screen created by the media propaganda. During his duties he was threatened by Taliban or so-called Tehreek-i-Taliban Swat. But he never gave any attention to such threats. The true coverage of what was happening in the Swat and disclosures of reality of these so-called Taliban was not bearable by these terrorist elements. This was not only making the masters behind these puppets but was also creating a hard time for propaganda masters. When Pakistani nation came to knew the truth by coverage and truthful reporting of such patriotic journalists like Sirajjuddin this not only defied the propaganda campaign but conspiracies of the enemies as well. Moreover when Hindus disguised as Taliban were exposed had no where to hide from criticism on international level. So it became necessity for these supporter of terrorists in Swat to remove all such patriotic journalists who were not ready to sell their professional values in the hands of these foreign agents. Mr. Sirajjuddin received many of such threats to his and his family’s life. On many occasions agents of Taliban visited his house and asked him to visit headquarter of Taliban, where they will brief that what he has to do. On the other hand if he did not adhere from bringing forward the truth and did not accept Taliban's order he will be at great risk. Sirajjuddin who was a true Pakistani and a pure journalists by heart never gave any importance to such threats.  He continued fulfilling his duties and the whole truth was made aware of the reality of Taliban and their master minds controlling them from with support of , and NATO. 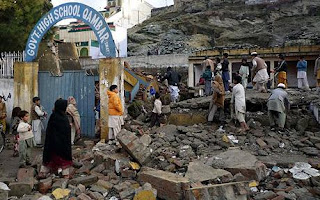 On 28 February 2008 while Sirajjuddin was attending funeral prayers of DSP Javaid Iqbal, a suicide bomber blasted himself in the funeral gathering. Sirajjuddin sustained many serious injuries and embraced shahadat. In this bomb blast 70 innocent people embraced martyrdom, out of which 5 people belonged to the family of Sirajjuddin. This was such a great loss for the whole family. But alas! No one has ever dared to pay attention to such a brave journalist who kept his faith in journalism and did not bow to the tyrants. On the other we hand we see many journalists who are busy in criticizing security agencies on the basis of their fabricated stories which after wards prove to be wrong. When such journalists become useless they are murdered by their own bosses or in the words terrorists for whom they have been manufacturing stories and then security agencies are blamed fore this. They get media coverage, international community mourns for them, human rights activists get active, our politicians pay special visits to their families for photo sessions, the heirs of these journalists are paid out of relief fund. 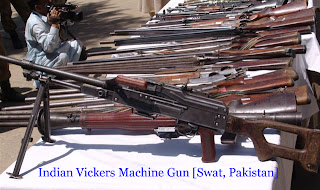 But what happened to the family and story of this Shaheed journalist? This is another painful story. From what type of pain and sorrow the family has to pass this is unimaginable. But what our media did, why our human rights activists remained silent, why our media did not take this case to the higher level govt. officials, does any politician or minister or NGO dared to visit or provide the grieved family with any type of moral or financial support? The answer is NO. But why? Perhaps he was exposing the so-called Taliban who shared their agenda with our private media, our NGO’s, our corrupt politicians, and the agenda of anti-Pakistan forces. So what was the agenda? It is clear the agenda was to weaken so that we cannot defend our mother land, to defame army. Or perhaps the masterminds of these terrorists known as Tehreek-e-Taliban Swat and our media are mutual. The persons like Sirajjuddin are hurdle in the way of their conspiracies, their struggle to weaken and disintegrate , so Taliban martyred him and our media kept silent so that the conspiracy could not be unveiled. Whatever the factors or purpose were behind. What about govt., our govt. which announced relief fund for victims of terrorism, specific relief and jobs for heirs of journalists who lost their lives in these terrorist activities? Nothing the grieved family is still waiting for any compensation that might help them in such poor financial situation…

Written By Muhammad Ahmad
at 12:00 AM