Why only Pakistan has been selected for protection of Homosexuals… 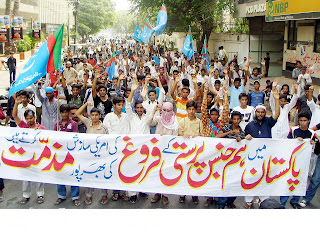 Is not this astonishing that on such an important moral issue all the anchors (showing their knowledge to the public for their mental uplifting) of talk shows of Pakistani TV channels, moreover state and non-state guests and intellectuals are totally silent?  All these people who dramatize even a small incident in such a way that the audience is shattered by its gravity. Not only this Aasma Jahangir and Dr. Ayesha Siddiqa are also silent on this issue, while protection of human rights of all human beings (excluding Muslims or minorities of India) is their favorite topic. However, let us come towards the today’s topic.

Actually first time in the Federal Capital, Islamabad a gathering was held for showing solidarity with homosexuals. In this gathering American govt. assured Pakistani participants fond of this s hideous act of its support and announced to provide them protection. The mysterious aspect of this gathering is that American embassy itself issued a press release about the goals of this gathering based upon anti-moral values. While before this many gatherings have been held but media has been never allowed to get any information about them. For example last year in a costly party of “Dance and Drank” in which famous Pakistani anchors, TV producers and special reporters were invited was held in American Embassy but no news or the goals of this party were ever released. One of the participants sent the pictures of the participating anchorpersons to his friends via email from which these pictures were spread over the internet. 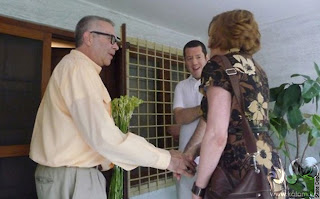 The pictures of  participants of this gay party have not been released yet along with the press release, maybe they will be also issued at some proper time, except the picture of Supervisor of Embassy Richard Hogland who has been shown welcoming some one.

According to the press release special representatives from “Gays and Lesbians in Foreign Affairs Agencies” (apparently this department has been recently established in US Foreign Affairs Ministry) and Richard told Pakistani participants, “in such a situation when extremists are targeting Pakistani society and the struggle of homosexuals is at its initial stages, American govt. and American Embassy in Pakistan is not supporter of homosexuals but will stand side by side on every step”. In the press release this was also told that the gathering of homosexuals in Pakistan is actually held in connection with Barack Hussein Obama’s address on 31 May 2011 in Washington, in his address he has said that we had dedicated ourselves foe the equality of rights without any difference on the basis of sex. 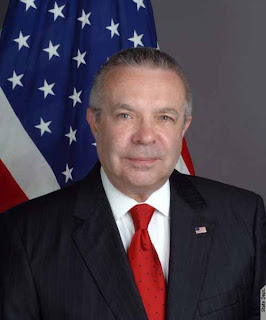 As soon as the news of Homosexuals gathering in Islamabad was released the protest and anger in the whole society was natural reaction. People took to the roads to protest against the American act, print media also condemned this act by publishing editorials and articles against it. The protest of Pakistani nation was rejected by women Speaker for American Foreign Ministry in Washington by saying that USA (United Satanic Alliance) will raise voice for rights of homosexuals to get them their rights. 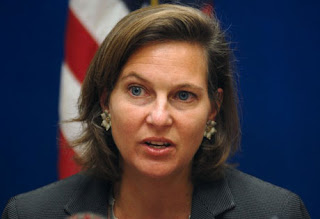 Now the question is why Americans selected only Pakistan outside USA for a gathering in the name of liberalism or human rights, where the fire of extremism set by USA itself has transformed itself into a proper war. On the one side, the security agencies are facing (American) terrorists while on the other hand the fire of lawlessness has engulfed Karachi. The American war on terrorism has now become a war of survival for Pakistan. The shortage of electricity and energy, unemployment and lawlessness had formed the shape of crises. People are longing for cheap justice, medical treatment, good education, and future for their children. In such critical situation why America is worried about the rights of homosexuals?

There is no doubt that like other societies, in our society too many people fond of this sinful act are present, than what America wants that we allow them to do whatever they want publicly in the name of liberalism, progressiveness and anti-religious struggle? Is this the standard of development and liberalism? I would like to ask all those so called progressive fond of being known as MODERN, intellectuals protesting against shortage of forgiveness and tolerance, the men and women looting dollars through so called NGO’s in the name of giving protection to girls who elope away from their homes, and mostly to the famous women activists who were on the forefront in the fight for rights of Mukhtiaraan Mai, that is the actual problem of Pakistani nation is HOMOSEXUALITY? If their answer is in YES, than would they like that their children fulfill their desire in beast’s way, in public gatherings, roads, and streets?

Can anyone ask Americans that why did not had a gathering in Iraq? In Iraq, where they had removed a dictator at the cost of 2 million innocent Iraqi’s and restored all human rights. Two days after US consulate issued the press release about gathering in Islamabad, two persons were hanged in public in Iraq so that other could learn a lesson. The picture is also attached here… 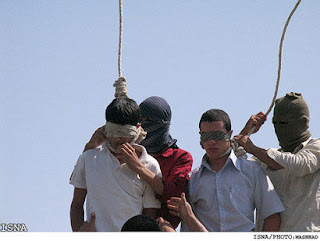 US should had a gathering in Afghanistan, where USA has murdered 1 million innocent people in a resultless war and now they want to run away from there by telling the world that they have achieved their goals. Why did not America dare to hold such a gathering in Kuwait, Behrain, UAE or Saudi Arabia? Or at least why not in India where the relations between USA and India are in full swing, are the homosexuals given their rights for which Obama has raised his voice on 31 May? I will repeat my question why ONLY PAKISTAN HAS BEEN SELECTED? No! The actual issue is different, in the internal political war US had insulted Pakistani nation.

Now I would like to discuss dual standard of USA regarding human rights;
Guru Rajnesh, he got popular in USA with the name of Bhagwan Shari Rajnesh, is a historical character regarding homosexuality and immoral sexual relations. Guru Rajnesh was born on 11 december 1931 in Indian state Madhya Pradesh and died at the age of 58 years in Indian city Sher Pota of Maharashtra after exile from USA. After getting popular in India as Guru when first Aasharm was established by him in Poona as compared to Indians well educated, civilized and developed Europeans and Americans were more interested in his teachings for spiritual and mental satisfaction. He decided to migrate to USA as they were supportive to his teachings. In 1981 he arrived at US state Oregon and established first Aasharm (hermitage) with the name of “RajneshPuram”, with in a short time he got popular as Bhagwan Rajnesh in all the US states.

The actual reason behind the popularity of Guru Rajnesh was his advice towards homosexuality along with free sex, in his Aasharm drugs were openly used. According to his cheatings for fulfillment of sexual desire one is free to have sex with who ever, at whatever time and place. Once it was witnessed that visitors of his Aasharm reached to 35000 each day. He was among one of the most influential and wealthy Americans. In this situation on the one hand lawlessness touched its peaks in the Oregon state while on the other hand Guru Rajnesh and his followers were creating problems for US federal govt. They foresaw the cultural destruction of USA, because homosexuality was spreading as havoc in USA. At least Americans arrested Guru Rajnesh under so called accuse of violating Immigration laws. When internal pressure was increased he was released on the condition of leaving USA, but the problem was Guru Rajnesh did not want to go to India, because due to his immoral teachings there was anger and hatred in India against him. While 21 civilized countries, known as champions of human rights denied to issue visa to Guru Rajnesh because they wanted to save their younger generation from the teachings of Guru and homosexuality. Guru was forced to return to India. In 1990 before his death he was affected by some type of incurable disease. He has several times told his near friends that Americans has given such type of poison due to which he will not survive.

If American govt. was so much supportive to homosexuality as now it is being expressed than what was the crime of Guru Rajnesh? However historically people became aware of presence of homosexuals as a group in June 1969 when New York Police raided a pub specified for homosexuals. In reaction to this many men and women homosexuals protested on the roads. In order to express solidarity with them including different cities of USA, European, Canadian, Australian, and Japanese homosexuals also protested against American police raid. After this within 3 years the number of organizations for homosexuals reached to 1200 from 20. At least in 1986 American state, Wisconsin and 50 more counties accepted rights of homosexuals. They were allowed to adopt babies. Their newspapers, offices and hotels were established. They were allowed to participate in politics with separate identity as homosexual. Now it is easier to understand why Guru Rajnesh was exiled in 1985. After getting rights in one state homosexuals started their struggle in other American states. Within no time this issued was transferred into political problem. Republicans were against them while democratic were supporting them.

Now once again the ruling party in USA has used homosexuality as a political stunt. The address of Obama in favor of homosexuals was a part of this chain. After death of Osama in Abbotabad operation the popularity graph of American President touched 87, however only after three weeks it retarded back to 34. After this by reliving the problem of homosexuality they want to earn cheap popularity. Because within USA and Europe there is a great number of people who are against homosexuality. Possibly this may favor Obama politically, but this question will still remain unanswered that why only Pakistani has been selected for this…

Has USA fulfilled the rights of Common people that they are now struggling for rights of homosexuals? The videos of US war crimes may show the moral values and respect of human rights in Americans.