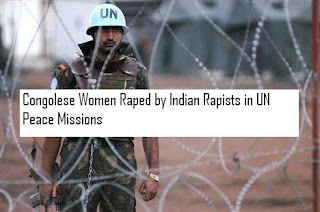 You must have heard the story of a thief who had gave up his bad habit after marriage of his sons. After his death, his sons and daughter in laws gathered to distribute his possessions. His possessions were locked in trunk and he always used to hang its keys by his neck. When his sons and daughters in law opened the trunk, they were shocked to see items of their household that were stolen time to time in the past. Precious ornaments, crockery, and cloth that were part of dowries of daughters in law, all were there. Loss these items had created storms in the family. Many accusing fingers were raised. Secret of their father was revealed that although he had quitted theft but to satisfy his habit, he used to steal items from his own house.
Same is the situation of Indian army. UNO had accused Indian army in writing of rape of Congolese women by its officers and soldiers. Previously such accusations were raised by Kashmiri and Indian minorities but were never listened to. Nobody sympathized innocent women of Kashmir and minorities whose honor was targeted deliberately by Indian army personnel. International media withheld such news of rape and murder. When such incidents resulted into general unrest and curfew, still international media highlighted different reasons for these. 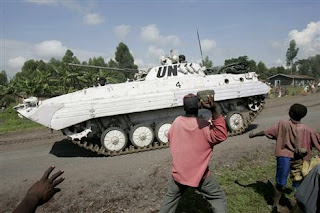 The recent example of such incidents is that of Nilofer and Aasia, two girls in Shopian, Indian Held Kashmir, who were abducted by Indian soldiers while gathering wood near their home. Both girls (Nilofer had a baby back in home) were gang raped in Indian army camp and later murdered. Their bodies were thrown near their home. People protested against such heinous crime and Indian Held Kashmir had to go through curfew for six months. Tens of young Kashmiri including children were killed by Indian police during protests. Western median made no mention of such happening to the world. Even western media did not felt any moral deficiency when Indian home minister accused Kashmiri mujahideen for this incident and arrested many innocent youth from that area.
Even UNO has never paid any attention to accusation made not only by Arundhati Roy, a famous author, but other women organizations about rape of minorities particularly Kashmir women being practiced by Indian army as state policy. UNO sent  Aasma Jahangir, a favorite of Indians, for a fact finding mission to obscure the human right violation in India (you will observe Asma Jahangir in happiest mood at Wahga Border carrying flowers for Indians on the eve of their Divali or when she returns back from pilgrimage into India). She has always sponsored Indian interests against that of Kashmiri women. However, UNO has become the affected party to such incidents for the first time. A question can be raised that why so? UNO always send soldiers in war torn countries to protect its people and particularly women. UNO and its armed missions have played a dominant role in this regard. The troops from different nations are deployed to war affected countries after due considerations of local customs and conditions. The mission of such contingents is to establish peace, distribute food, medical, services, and promotes sense of protection amongst women so that they can start their normal life. If UN contingents are involved in moral and social crimes (prevention of which is sole purpose of their deployment) than you can well imagine the general condition. Such situations will benefit criminals and make life hell for peace loving people.
The nations send their best military contingents as part of UN mission to increase their influence. Case of Indian army is different. Indian government often use their military might against its provinces to quell separatism and control minorities. Sexual abuse is used as a weapon. That is why Indian soldiers are good at this. On 15 July 2008, hundreds of old women gathered in front of Indian military headquarters at Kangla Fort, Imphal part of State of Manipur and protested naked against Indian army atrocities. They were carrying placards inscribed with slogans against Indian army’s policy of sexual abuse and gang rapes. These women (including well educated, professors and doctors) had been victim of Indian atrocities in some part to their lives. Their only crime was that the men of their family had either refused to accept occupation of Manipur by Indian central government or were sympathizers to separation movements. These women were chanting slogans, “Indian sexual beasts, come and rape us, we are of the age of your mothers, come and rape your mothers”. Indian soldiers at the central gates were unable to decide either to open fire on these women or arrest these naked women. Women from spectators covered them with their clothes. This protest was result of Indian atrocities against a professor of famous Ghana Priya Women’s College, Imphal. Her son had joined United Liberation Front of Assam so she was raped by Indian beasts as a punishment. Details have been printed by “Tehelka dot com” Current Affairs in August 2008. 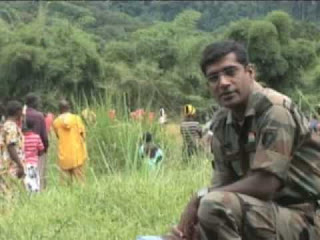 However, such incidents are not new for Indian media. Few years back, Indian army gang raped girls from Mao Separatist and than threw dead bodies in trenches. Such scandals have been noticed many times. Indian media has decided to ignore such incidents. However, Sohani Laxmi, a lady journalist from Gwahati, Assam has published full details of an incident in that high caste Hindus of Gwahati forced a seventeen year old girl walk naked for eight kilometers. This was published at “Jharkand Blog” with a title of “Adivasi Girl”. Hundreds of such heinous incidents can be viewed on line. One of the sorry aspect of this whole issue is that incident of Mukhtiaran Mai is broadcasted throughout the world. On the other hand, the so called civilized nations and their media tacitly choose to ignore Indian policy of sexual abuse and rape.
It is the result of such neglect on the part of local as well as international media that Indian soldiers failed to desist from sexual abuse in UN mission of Congo. The Indian soldiers exploited the war torn women of Congo. These incidents surfaced when some unmarried Congolese mothers reported this to UN headquarters in Durla, Congo for upbringing of their children. The looks of these children were Indian instead of African. After investigation by UN institution for women, it was revealed that Indian soldiers fathered these children. Fifty-one of such cases were registered. Victims of Indian sexual abuse reached into hundreds. These girls were raped either through coercion or under deceit of food items and Indian made cosmetics. Their war-ravaged condition was exploited. It was a disgrace for UNO as an institution because it is the legal and moral responsibility of UN to ensure protection of these Congolese girls. The matter was reported to UN authorities in New York. Another such incidents was reported to UN authorities by South African home ministry in that a Lt. Colonel and two Majors of Indian army were arrested raping a woman while on leave in tourist city of Plettenberg Bay. They were arrested by police and jailed. They were released under diplomatic laws and repatriated to India. 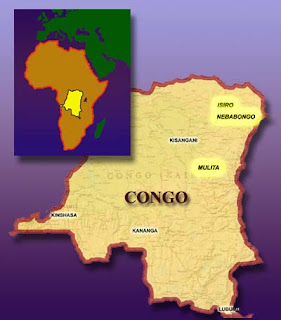 Indian brigade commander in Congo accused Pakistani soldiers of such violations to avert the blame. UN authorities ordered DNA tests. The DNA samples of these pre-marital babies resembled to those of officers and men of 6th Sikh Battalion of India which was part of UN mission in Congo in 2008. UN authorities informed Indian government and asked for legal proceeding against these officers and soldiers. Indian efforts of accusing Pakistani soldiers were refuted due to DNA test. It also helped trace the actual fathers of these babies that included 12 officers and 39 non-commissioned officers and soldiers of Indian army.
As usual, Indian government took policy of denial and neglected UN report and demands of punishment against these army personnel. It was a set back to UN’s good image. In 2010, when an Indian battalion was ready to embark on UN mission in New Delhi, UN refused to accept them. UN has made it clear that until the time Indian government does not punish those culprits involved in sexual abuses in Congo, UN will not only repatriate all Indian contingents but also take legal actions against them by itself.

Indian government could not ignore large amount of UN payments and its repute. UN threat has worked and at last a committee comprising a Brigadier and two Colonels have been tasked to investigate 6th Sikh Battalion in Uttar Pradesh (battalion is stationed at Chandigarh). UN has reported involvement of Indian contingents in sexual abuse not only in Congo but also in Sudan, Liberia, Ethiopia, and Sierra Leone. Other than that, Indian soldiers have been involved in smuggling of narcotics and weapons.

Now question is; will UN be able to force India to punish its soldiers involved in human right violations including sexual abuse not only in Indian Held Kashmir but in Congo as well. I am sure that Asma Jhangir, Najam Sethi and Indian influenced so called progressive authors, poets, journalists, politicians, industrialists and traders will raise hue and cry that we should not involve ourselves in such issues. Dear readers, I protest against these Indian atrocities on three reasons:
Ø  One, world is a global village, it is the moral responsibility of people to raise their voices against atrocities in any part of the world;
Ø  Two, Indians tried to blame Pakistan for their wrong doings;
Ø  Three, India is continuing its policy of sexual abuse and rape of Kashmiri women as a weapon.
Every man and woman is morally bound to protest against such atrocities. We must protest against Indian aggressions and atrocities no matter somebody likes it to not. 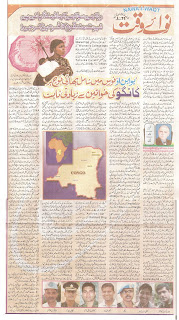