This is the time to stand with Our Army…!

What was the number of terrorists in Mumbai attacks no one has been able to claim with sure. According to Indian officials, they were 10 in number. If we accept Indian claim, 2 men in the Taj Hotel gave tough time to a Brigade of Indian army of 78 hours. In order to record the operational activity of Indian army at least 200 cameras of Indian and international TV channels were installed but no one was allowed to capture the scenes. Not only this India had not disclosed the recording of security cameras installed in Taj hotel. However only 2 state TV channels were allowed to record some of the scenes while only screened and specially clips of this recording were issued to media. Utilizing these clips Indian media started propaganda campaign against Pakistan and ISI.
From the sound of first bullet Indian channels has started their Breaking News by blaming Pakistan and ISI (as terrorists before the attacks informed them). On the midnight of 4th day of the attacks while Indian soldiers were riding into their trucks to return back, garlands were presented to t hem and people to praise them chanted slogans. While during all this local media of Mumbai, journalists and people were raising their protests that Mumbai attacks were staged to kill Chief of ATS Hemant Karkare and his team. According to them this attack was mutually planned by Indian Army, RAW and RSS. So that terrorists like on duty Indian army officers Colonel Purohit and extremists from Hindu groups could be saved as Hemant Karkare had not only arrested them but also succeeded in getting confession from them in court that they were involved in terrorist attacks like Samjhota Express and other bomb blasts. However Indian army succeeded in successfully disposing off Hemant Karkare by winning the support of Indian public through the support of Indian media and effective propaganda campaign. 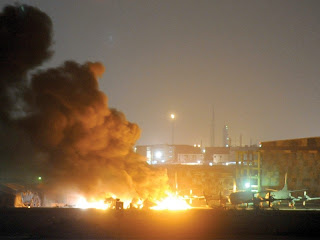 In contrast to this when on the night of 22 May terrorists attacked Mehran Airbase of Pakistan Navy, dozen of channels arrived at the spot and telecasted live videos by zooming in. they were not only discussing the movements of troops but identity of the regiments as well and they were telling that on this building commandoes are being dropped through helicopter. On the other hand anchorpersons sitting in their studios were raising questions over capability of Pakistan army. Every channel was busy in criticizing Pakistan armed forces. No one raised this point that if their camera can cover the movements in the night through zoom in than why in normal situation  any terrorist cannot record the movements within the PNS Mehran from roofs of adjacent houses or windows? Cannot such recordings be used by terrorists to plan the attacks and send them to his control room in their headquarter. So that after watching these recordings terrorists can chose weak point of security and chose proper time for attack.
Our TV channels focused on a search light that it is out of order while the other was destroyed by terrorists by firing bullets, but no one dared to point out that when the area out of the boundary of PNS Mehran is dark due to load -shedding for 1, 1 hour, than has govt. made any policy to tackle this? Leaving PNS Mehran aside in all the cities there are thousands of such sensitive installations, which are drowned into the dark of night due to load-shedding. Alas! Any journalist had time to inform people that how many armed departments have alternate solution to load shedding or constant supply of heavy diesel for heavy duty generators? If the sensitive areas lightened inside while outwards are covered by dark will not this situation be suitable for attackers? 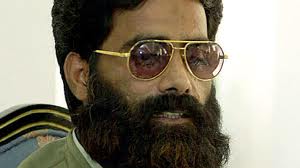 Ok lets accept that there was no external security outside Mehran Airbase, which is not possible as Pakistan does not have extra security of 10 hundred thousand persons to watch these sensitive installations from outside (while same anchorpersons are always objecting the presence of Pakistan army at all and defense budget). 10-12 hours passed to get control over these terrorists, but the question is how rocket launchers, grenade, and other latest weapons arrived into Mehran, who is responsible to check this on the way, Lineman of WAPDA, meter reader of gas, plumber of water board or postal worker of post? If all this is responsibility of army or ISI than why should not end all those departments taking pays in the name of enforcement of law? Whole country is filled with illegal weapons to such extent that people murder in front of judge within the court and walk away calm fully while no one dares to stop them or question them. In spite of all this we are not ready to accept the we are at the verge of not only economic but social collapse as well. Actually daily murders in the form of target killing, increasing crimes and suicide bomb blasts had made us senseless to our surroundings. Other wise how is it possible that a terrorist is living within my neighborhood and I am unaware of their suspicious activities? If I know all this and does not inform security agencies than either I don’t have trust over Police or I am coward, in both situations govt. and overall social structure is responsible for this. Otherwise if a brothel house is opened in any Mohallah or Bungalow Police Touts arrive there to take the bribe than how is this possible that terrorists move around with rocket launchers and Police is unaware of this?
The reality is that Pakistani forces and ISI are in complete battle situation internally due to American interests in Afghanistan. In this war their secret agencies are also busy in this complex war. This war is not against formal enemy on the boundaries but against well trained gorilla force, our enemies are not only providing this force with latest weapons but with the dollars and man power. While in such critical situation Pakistani media is also attacking Pakistan army and ISI. Not only this factors unhappy with the timely intervention of Pakistan army in political problems (when politicians are about to sell this country), are also taking their revenge. Without taking this in mind that this propaganda campaign against Pakistan army will result in lost of trust of Pakistani people on army, this will at once decrease the morale of Pakistan army effecting the soldiers busy in fighting against enemies on the battle front. Are we aware of its results? Perhaps not and I am sure that majority of anchor persons criticizing Pakistan army just to earn easy money are not aware of the results as well but our enemy understands this. That when morale of the army is destroyed, soldiers are criticized in spite of all of their sacrifices of lives, than army facing enemy like unbreakable wall breaks from inside. 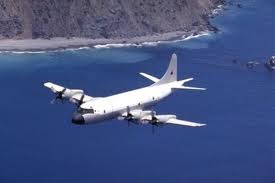 Look at the dreadful murder of journalist Saleem Shahzad, some anchorpersons are claiming that he has been assassinated by ISI. Because he was about to unveil the links between terrorists attacking Mehran base  and Navy officials and in this regard one of his episodes had been already published. Now if we accept this hypothesis that attackers were supported within the Navy than who will answer this question that why terrorists ignored Lynx Sea King (Anti-Submarine aircraft), Alleolte, latest Atlantic helicopters, new and costly airplane of Naval Chief HBC Jet and airplanes of Pakistan Airforce but they just targeted Orion EC3 airplanes, but at least why? Has destruction of these airplanes is loss of only Pakistan Navy? No! this is a serious blow to our defense. This has deprived us of our superiority against Indian nuclear sub-marines.
Look at the unique aspect of above mentioned secret war imposed over Pakistan, that how much cleverly such situation has been created that our soldiers are facing enemies, sacrificing their lives but in spite of all this they are being trialed and criticized. Media is demanding answers politically of purely battle related incidents. While politicians are showing such unresponsiveness as they want to tell public, “they have no link with this war, it is a war of army and soldiers and only they should face it”, (because they have not time from political battle for power and conspiracies). 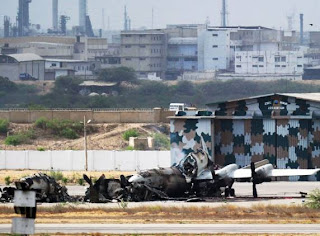 Here I would like to mention article written by B. Ramin Ex-Chief of Indian secret agency RAW now working Director of Institute for Tropical Studies, Chennai (think tank of RAW). This article was published online on 1 June, the title of the article is sufficient to unveil the hidden propaganda and poisonous message behind this article of 19 paragraphs. The title of above mentioned article is
“Was Saleem Shahzad On Trial of ISI Men Behind OBI’s Stay At Abbottabad”
here I would like to copy only three paragraphs from his article, lets think over it that why the thinking of our anchorpersons and RAW agents are so much same and why such coincident occur only in Pakistan that whatever propaganda is going on by India few of our intellectuals are also supporting it as well…
It is apparent that Shahzad was killed either because of what he reported in his dispatch of May 27 regarding the penetration of the Navy by Al Qaeda or because of what he intended reporting about the training camps of the 303 Brigade.
Thus both the ISI and the 303 Brigade had a common motive for having him eliminated. Was their decision to eliminate him only related to his story on the Mehran attack or was there more to it? Whoever took the decision to eliminate him was in a desperate hurry. He was kidnapped within 43 hours of the first part being published. He would have most probably dispatched the second part in the week beginning May 30. His captors wanted to do away with him before that.
Well-informed contacts in the Pakistani Police say that his kidnapping and murder were related not only to his investigation into the Mehran attack, but also his investigation into the local support base of OBL which facilitated his undetected stay for over five years at Abbottabad. His investigations post-May 2 were dangerously moving that direction. His discovery of the penetration of the Navy by Al Qaeda was only the first step in his investigation. According to these police sources, he was digging deeper into OBL’s support base.
In the end I would like to write something about Orion EC3 airplanes; the sensitive instruments installed in these planes were not only capable of detecting and recording in the depth of sea, sea surface but also to detect and observe the movements on ground, moreover these planes were capable of recording conversations between enemies. According to a Russian online news website, one day before destruction these planes have recorded American activities in Baluchistan along with their conversation. Before that Pakistan Navy had decoded the recording and got informed about American plans and made Americans ashamed like that of Raymond Davis, so both planes were destroyed by terrorists. According to the website one terrorist who was killed on spot had a tattoo  engraved over his arm, while there is no such fashion in sub-continent or Afghanistan. However due to Russian affect youth from Tajikistan and Uzbekistan get such tattoos engraved, if this is true than Indian role behind attack over Mehran Base should be kept in mind. India has already taken Farkhor Airbase on lease in Tajikistan 2 miles away from Uzbekistan border and converted it into a terrorists training camp. Here poor youth from Uzbekistan and Tajikistan are trained for Gorilla warfare and later sent to Pakistan. Than was the attack over Mehran base a mutual plan of India and USA? This secret might remain secret for long time…
Urdu Copy: 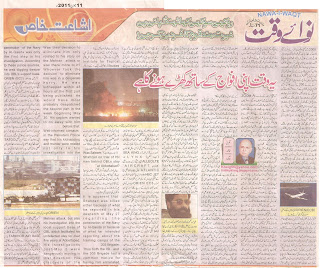