In the tragic incident of suicide of bomb attacks in Charsada, outside Training Center of Frontier Constabulary on 12 May, at least 80 soldiers were martyred and the same number were seriously wounded. Although Frontier Constabulary is not directly linked with army, but public takes this provincial force as semi-army. Taliban accepted the responsibility for suicide bomb attacks and that they had done so to take revenge of Osama’s death, moreover they threatened to attack Military Academy and other training camps of army. However, on the night of 22 May, in the way terrorists attacked Naval Air Base, this astonished everyone, was this attack also for taking revenge of Osama? WE Will discuss this later. Pakistan army and Pakistan itself are under wrath externally, and after operation of 2 May, armed forces are being criticized internally, than is this also the part of a chain to take revenge?
On the other hand devoid of all international, diplomatic laws and moral values, America; who fought all of its so called war-on-terror by keeping Pakistan in the front, while military and political leadership of Washington accepts that without support from Pak-Army and ISI, US and NATO forces were not capable to face terrorists, after all this, statement from Chief of CIA that if they had informed Pakistan army or ISI about the Abbottabad operation, it could have resulted in failure. This is equivalent to attack over Pakistan army, moreover in spite of sacrifices from soldier to Lt. General Rank; the expression of distrust is not without any reason but part of a “Great Game” or planning. In this game under the cover of Al-Qaeda, through the so called war-on-terror imposed by subsidiary of Washington, i.e. UNO, the role of Pakistan army and ISI has been made doubtful on the international and national level just with one attack. In the history of last 63 years, either it was Gorilla war or formal war but such an organized attack has not been launched against Pakistan army. While world is aware from this fact that in so called war-on-terror imposed on the world just for American political and economical needs (which has been now converted into war for survival of Pakistan), most of the sacrifices has been given by Pak-Army, while on the other hand utilizing its professional capabilities ISI had defused many plans of terrorism in Europe ensuring the safety of the people of these countries. 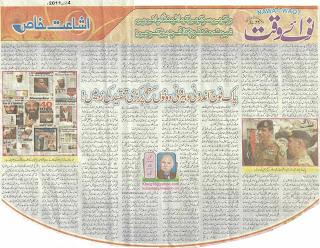