Massacre of Muslims in Palestine & India and Role of Civilized Nations...! Part-II

On the eve of 27th February 2002 when Sabarmati Express arrived in Gujarat leaving behind the burnt bogie of pilgrims, the news of tragic incident had already reached there, Hindu terrorists had started attacking Muslim localities. RSS declared 28th February as Revenge Day and strike in the whole state. But who waited for tomorrow. Organized groups of Hindu terrorists attacked Muslims with knives, swords, stabs etc. Some took to the Muslim bazaars; Muslim shopkeepers were worried more about their houses and families as compared to their goods in shops. Many of them left there shops unlocked running towards their houses to protect families. But they were stopped on the way and murdered. The massacre of Muslims was a game for Hindu terrorists. Those extremists who could not find any sharp edged swords took their kitchen knives to slaughter Muslims. State police was there but as a spectator. This game of death continued for 3 days and 3 nights. Houses were burnt along with their inhabitants, women were raped and burnt alive. Even innocent infants and elderly were not safe from the Hindu terrorists. Many children and women tried to take refuge in the homes of their Hindu neighbors but they were handed over to the Hindu terrorists mercilessly. A heinous role was played by the state agencies in genocide of Muslims. Thousands of Muslim families were forced to abandon their houses and take refuge in temporary govt. shelters. A girl school was also converted into such temporary shelter and displaced families were kept there. Majority of the refugees were elderly women and underage children. Suddenly in the midnight of 2nd March Hindu terrorists attacked the school, till the sunrise not a single Muslim was left alive. Everyone was slaughtered by Hindus. Hundred of young girls were kidnapped and could not be traced yet. In the three days not a single Masjid (mosque) was left intact. In the Assanpura the grave of a Sufi, WALI GUJARATI was also set on fire. The Muhafiz Masjid of Assanpura which was declared as National Asset by Indian govt. was also demolished by Hindu extremists. According to Indian print media out of 25 districts of Gujarat, in 15 districts Muslim localities were completely destroyed, in the other 3 districts the property of Muslims was partially damaged. At least 1 person was murdered of every Muslim family or their women raped by Hindu extremists. From the night of 27th February attacks were launched over Ahmadabad, WADUDRA, SAHARAKANTA, on 28th February Hindu terrorism engulfed Gandhi Nagar, PANJ MEHAL, MEHANA, KHEDA, JUNA GARH, BANAKANTHA, PATAN, ANAND NARMADA, BHARACH, RAJKOT and SURAT. This genocide of Muslims continued for 3 days while in remote areas it continued till 15th March. In contrast to this according to international media the massacre of Muslims continued till mid June. According to Indian govt. 2500 Muslims were murdered. But according to media reports more than 6000 Muslims were murdered, while the record of the Muslim population was destroyed. Many families were slaughtered and no one out of them remained alive to represent the family. According to India judicial commission 205 Masajid (Mosques) and 298 tombs were destroyed. 6100s Muslims were forced to take refuge in govt. shelters because their houses were destroyed by Hindu extremists. During the investigations it was revealed that state Police fired 10000 bullets, 279 hit Muslims, where did the rest hit? Moreover what was the crime of these 279 Muslims murdered by Indian Police, just they were resisting against Hindu terrorisms or they were not ready to die from their hands? The situation of Gujarat can be imagined by this that on the night of 28th February curfew was imposed in 27 cities but when after 1 month situation could not be controlled curfew was extended to 35 other cities.

Indian media biased against Islam tried to cover Hindu extremism by giving it the name of Hindu-Muslim riots. Fake reports of murder of Hindus in the hands of Muslims were published in order to further deepen the already grave situation of Muslim genocide. BJP started protests in Parliament. Thousands of Muslims were arrested for spreading riots in Gujarat and murdering (actually Hindu govt. was frustrated that why they were still alive).
How whole Gujarat was converted into slaughterhouse of Muslims? Moreover in today’s advanced era of communications how is it possible that international did not cover this genocide, especially when they are aware under cover of these so called riots dozens of churches have been burnt as well, but champions and leaders of CIVILIZED NATIONS could not gather courage even to condemn it (or they were themselves behind this)? 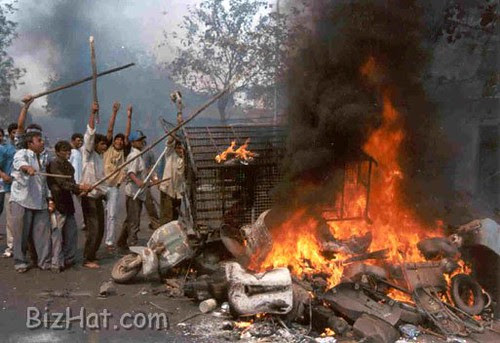 On 27th February BBC brought forward the stance of British govt.
“The violence in Gujarat was planned, possibly moths in advance and it aim was to purge Muslims from Hindu areas. The violence had all the hallmarks of ethnicity”.
BBC also disclosed that report prepared by British officials was much frustrating; in the report it was proved with the support of evidences that state machinery was fully supporting Hindu terrorists. BBC also disclosed that actual number of casualties and damage to the property of Muslims was much higher as compared to what was claimed by Indian govt.
On 30th April, AMERICAN HUMAN RIGHTS WATCH from New York issued a report that whatever happened in Gujarat was not a reaction of fire in a bogie at Godhra Railway Station but it was planned.
The headline of the report of representative of SOUTH ASIA HUMAN RIGHTS WATCH Sameeta Narula, consisting of 75 pages is
THE ATTACKS WERE PLANNED IN ADVANCE AND ORGANIZED WITH EXTENSIVE PARTICIPATION OF THE POLICE AND STATE GOVT. OFFICIALS.
She writes, “Policemen having any soft corner for Muslims were sent on forced holiday or transferred to such areas where no riots were expected i.e. Hindu localities. Between 28th February to 2nd March when the genocide of Muslims was at its peak thousands of employees of Municipal Corporation were guiding Hindu extremists with the help of the voter lists of Muslims. There are evidences that not only Police was involved but on the front in the genocide of Muslims. Indian Police was along with the Hindu extremists in order to tackle any resistance from Muslims”. She had also pointed out many mass graves of Muslims murdered by Hindu extremists.
On 25th November 2007 Indian newspaper THE HINDU published a secret report of retired Judge of Supreme Court General Krishna heading a 9 member tribunal, the title of the news report was GODHRA CARNAGE AN ORGANIZED CRIME. This report is of the view that from the fire in Sabarmati Express at Godhra Railway Station to genocide of Muslims in Gujarat was planned by NARINDRA MODI and Hindu extremists.
In spite of so many evidences neither UNO took any action under International Law of Human Rights presented after World War-II,
“THE CONVENTION OF THE CRIME OF GENOCIDE”
Nor Indian govt. had any effect. Whether it is subsidiary of America, United Nations or other so called Western Civilized countries, Muslims are just like insects for them. On their need they support Civil War in Muslim countries like Libya to get blank cheque from UNO to bombard Muslims. On the other hand whether these are jewish terrorists of Israel crushing innocent Palestinian stone pelters under their tanks, bulldozing houses along with inhabitants or genocide of minorities in India by Hindu extremists, the CIVILIZED NATIONS are deaf and dumb to these violations of human rights. They could not dare even to condemn it. These enemies if humanity are so much shameless that even after reports of TEHELKA.COM on 24th October 2007 proved that Hindu extremists groups and organizations were behind the genocide of Muslim genocide they had no effect.
The reporters of Tehelka.com made video recordings of leaders of BJP, RSS, Bajrang Dal and Vishva Hindu Pareshad through spycams during meetings and interviews with them in the period of 4 years to bring forward the reality. These recordings proved that Chief Minister of Gujarat gave the target of Muslim genocide to the organized (state) Hindu terrorists at the will of Central Govt. of India. This terrorism was given the name of OPERATION JAI SHARI.
According to the recordings before the fire in Sabarmati Express, thousands of trained Hindu terrorists were already placed in Gujarat from other states of India. These all terrorist were promised to be paid for Muslim genocide and moreover they were indemnified that no case will be registered against them. When on the night of 27th February the attack of Hindu terrorists was about to start, they were took to Muslim localities in the Police vans and armed with weapons. They were given the target to kill Muslims, rape women and destroy property as much as they can do in 3 days. According to 'tehelka' Policemen from other Indian states were involved in Muslim genocide in civil dress.
After such a big disclosure, case should have been filed against Hindu terrorists, Narindra Modi and other Hindu extremist leaders in International Court, but what happened actually? On 1st March an Indian court biased against Muslims sentenced 11 Muslim to death, 2o for life imprisonment under the charges of setting Sabarmati Express on fire. After 9 years on the same date of Muslim genocide this barbaric court verdict has been issued. What will be the more insult to humans and humanity that murderer is declared as innocent and innocent are hanged to death in the name of Justice? The more dreadful aspect of this verdict of Indian court is that no protest against this barbaric decision has been observed in any part of world not even in Pakistan and any other Muslim country. How can Muslim dare to protest, while they are begging to Civilized nations that they are not terrorists but peaceful human beings, Islam has no room for terrorism. Can there be worst situation of Muslims that we are ready to pledge our sovereignty to civilized nations in order to prove that we are not terrorists, but these Civilized (actual terrorists) are not ready to accept because they have only one target i.e. to remove Islam from world…