In today’s civilized which country has such laws allowing massacre of persons, group or tribe merely under the doubt that they may be planning to attack that country. They are attacking thousands of miles away from one’s boundaries. In the way USA is using drone technology in massacre of innocent Pakistanis, has USA any ground to justify these murders? Where are the human rights activists of Europe? Why UNO and its influential members do not take any notice of such murders of innocent women, children, and innocent tribal people who are even ignorant of conspiracies and interests of international imperialistic forces?
According to the news published on Saturday 16 April, 2011, USA has rejected protest of Pakistani people and concerns of Pakistani govt. over drone attacks. Not only this USA has repeated that she will not stop these attacks and end CIA operations within Pakistan as well. In order to justify these murders she harped on the same string which were used in Vietnam, Cambodia, Iraq and Afghanistan, “it is the duty of US govt. and CIA to protect Americans in the whole world”.
Now the question is that how undeveloped tribal people can be threat to America thousands of miles away? The answer we get from Americans is that the US forces in Afghanistan are at stake. Would the western media and civilized world like to clarify that why US forces and their western allies are present in Afghanistan? Moreover, what these wild beasts are doing for welfare of humanity in Afghanistan? Americans are of the view that they are here to free afghan people from Taliban and give them their basic human rights, than Afghan are protesting against these bastards. Leaving others aside now even American puppet and slave Afghan President Hamid Qarzai is also protesting against war crimes of US forces in Afghanistan.
You might have seen the videos by ROLLING STONE.COM, these videos were uploaded three weeks ago show that how American soldiers are murdering innocent Afghans as a game just for entertainment. They are made to run for their lives, than bullets are fired around them. Afghan youth try to take shelter behind trees or rocks but at last are killed by American terrorists.
Afghan youth are made to run for their life in open fields/plans, during this a US helicopter shows its skills to target these innocent people by firing rockets. As soon as the rocket hits the running poor soul his/her body is torn apart into pieces. Such scenes are recorded to commemorate the violations of human rights by Hilaku and Changez Khan. When alive humans were targeted by arrows in the big gatherings, as the arrow hit the running man and he fall down, spectators used to clap and raised slogans for the arrow man. These movies were published under the title of
THEY KILLED FOR ENTERTAINMENT
by rolling stone.com. 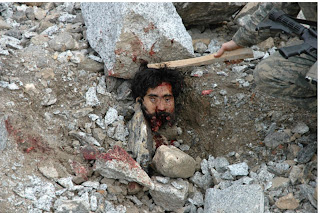 2 days before this German weekly SPIEGEL  published 18 pictures of Afghan people corpses in a post US SOLDIERS MURDERING AFGHAN CIVILIANS FOR FUN. In these pictures it has been showed that how US soldiers thirsty of human blood enjoy slaying innocent Afghans, these American beasts have been given the name of KILL TEAM by Spiegel International. After watching the pictures Afghan President first time condemned the war crimes of US army saying, “US soldiers deployed in Afghanistan use opium and marijuana whole night and in the day when they get out of effect of drugs, they set out for hunt of innocent Afghans”. He also said, “I am shocked after watching these photos, all these scenes should awake world that what US forces are doing in Afghanistan. They killed our youth for fun”.
According to John Goetz and Marc Hujer, representatives of Spiegel, US govt. got worried after the photos were published. Because this might become another scandal like Abu Ghraib jail scandal in Iraq 6 years ago. In order to tackle this situation Vice US President Joe Biden at once visited Kabul to restrain Hamid Qarzai from a harsh reaction. But the photos are so much dreadful and heart rendering that if Hamid Qarzai had not condemned them, his govt. would have been at stake. According to the report, the kill team belongs to fifth Stryker Brigade.
In order to suppress these reports, US govt. has sentenced one American soldier 24 years imprisonment for murdering innocent Afghans. Although he has been put behind the bars but after a plea in the civil court he will be freed. However, can this punishment redress the massacre of Afghans? Like Vietnam US soldiers are busy in raping Afghan women besides murdering them.
On 14th January 2011 different news websites published a report DAUGHTER OF AN AFGHAN POLITICIAN DIED FROM RAPE INJURIES CAUSED BY US SOLDIERS. According to the report, many Afghan women and girls were kidnapped and shifted to an American army base in southwestern province FARAH of Afghanistan to fulfill sexual lust of US soldiers. Here three underage girls got critical situation and were shifted to hospital. A 14 year old girl lost her life due to over bleeding of blood.  Americans wanted to take the dead body along with them so that it can be safely disposed off. However, an employee of the hospital identified the girl as the daughter of a famous politician from the Farah province. She had disappeared a few days ago. On the interference by the hospital staff, Americans left the dead body into the hospital and took the other two girls along with them. 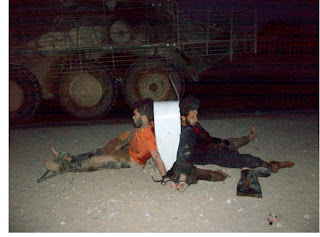 These news got published on different news websites by an Iranian news agency, in spite of all the efforts to suppress the report by Americans. After this the report about the KILL TEAM unveiled the American terrorism in Afghanistan. According to German weekly Spiegel, “Americans after murdering innocent Afghans as a game, create war like environment by throwing grenades and firing countless bullets, they try to feel like they have murdered these innocents after a fierce fighting. Afterwards in order to fulfill the legal requirements they make photos with the dead bodies as victorious. Dead bodies are ripped of the clothes and fingerprints, other birthmarks are recorded through the portable biometric scanners and this recorded information is than sent to higher command. The finger of the dead is cut and preserved so that when these soldiers return back home they can put it as a trophy in their drawing room”. These bastards in Vietnam and Iraq did same actions. 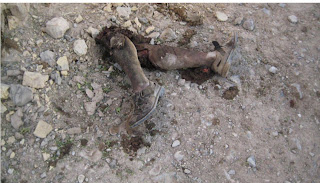 Although Americans have assured Afghan officials that they will punish other soldiers seen in the pictures (this has been done just to avoid protests), an American envoy also visited Kabul in this regard. But will America fulfill it promises? The answer is, “the murderer of two Pakistanis Raymond Davis has been appointed as in Afghanistan to supervise anti-Pakistan activities”. According to the media reports, he is given free hand to conduct terrorist activities through his agents in Pakistan from Afghanistan.
Keep in mind that American officials, Hilary Clinton and Senator John Kerry had assured Pakistan that a case would be filed against Davis in American court to punish Davis for murdering two Pakistanis. But alas! In spite of all their boastful and barbaric practices Hilaku and Genghis Khan always fulfilled their promises…
Click Below For
Urdu Copy:
Written By Khalid Baig,
Published in Daily Nawa-i-Waqt,
Dated: 22nd April, 2011.
at 9:51 AM