One of the readers contacted me and asked, “Why you pull India into every problem of Pakistan and blame it for the lawlessness and terrorism in Pakistan?” The question is like a doctor objects a patient that when ever he visits doctor why he has the same old disease.
The interests of Pro-Indian factors present in Pakistan aside but it is bitter reality that as a neighbor India has become a chronicle disease for Pakistan. This cannot be denied that we have to live in the neighborhood of India but who can reject that India has always been trying to harm integrity of Pakistan. While peace in Pakistan is at stake so the interests of all so called factors of society become meaningless. Not only Pakistan, look at the map and point a single country who is happy being neighbor of India? In order to enslave Sri Lanka Indians supported terrorism there for 30 years. Millions of Sri Lankans have been affected due to imperialistic plans of India. After a long struggle Sri Lanka succeeded in crushing Indian terrorists with the support of Pakistan. Sikkim and Bhutan have been already engulfed by India. Two provinces of China are also held by India. The economy of India is pledged by Hindus. The purpose of separation of East Pakistan was to complete the plan of AKHAND BHARAT and nullify TWO NATIONS THEORY. Although India succeeded in dividing Pakistan into 2 parts but it had to lick the dust because Bangladeshi Muslims are not ready to accept the slavery of Brahmans and never will. 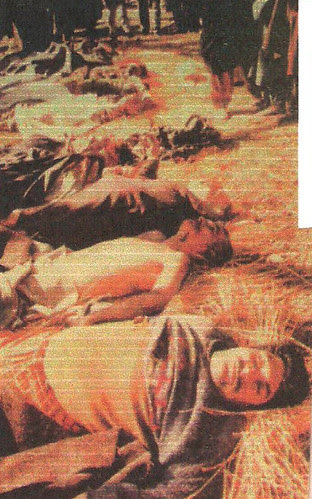 Possibly pro-Indian elements within Pakistan object that we are not responsible for the other countries of South Asia. Okay! We do not talk about other countries but what about Indian Held Kashmir? What is the crime of innocent Kashmiris? They are being punished just for demanding freedom or being part of Pakistan? Houses are burnt along with their inhabitants. Indian forces are murdering recklessly children, women and elderly. Gang rape of Kashmiri women is being used as a weapon to crush Kashmir freedom movement by Indian State Terrorists. On 30th May 20092 Kashmiri women were raped and murdered by Indian beasts. In the protests against such beastfulness 8 innocent people were murdered by Indian State terrorists. But India is not ready to punish its dogs (Indian Soldiers) and how it can while gang Raping Kashmiri women is part of Indian Military strategy. On such brutality no reaction has been observed from Pakistan’s so called human rights activists and not from the female representatives of NGO’s who are often going on pilgrim to India.
Possibly our liberal and enlightened friends fond of friendship with India cannot bear protests against Indian state terrorism in Indian Held Kashmir. Then what is their opinion about these innocent passengers of Samjhauta Express who were burnt alive just to stage propaganda against Pakistan and insult the only Islamic Nuclear state by declaring it as terrorist state. Propaganda was started against Kashmir freedom movement. A website from Nepal published the pictures of burnt corpses from Samjhauta Express making one shiver and forces to think is being a Pakistani or Muslim punishable by Indians to be burnt alive?
In the way India is spreading terrorism in Balochistan and NWFP via Afghanistan, obviously Pakistan will handle this situation but the water aggressiveness of India on the eastern side will hurt us for a long period. Moreover through planned Mumbai attacks in 2008 Pakistan was blamed for this drama. As the first step India ended the 60 year long meaningless peace talks with Pakistan. Afterwards India started to threaten Pakistan in order to create war mania in its public. However when this plan failed now it has started Pakistan to stop terrorism in India, (funny! how can Pakistan stop Indian military and RAW from bomb blasts within India?). the behavior of Indians is just like as one orders to its servants. To some extent our govt. policies are responsible for this that is always treating India softly. This is the result of our leniency given to India that even most coward nation of the world Hindu is demanding from us TO DO MORE. According to a Chinese News Agency Indian govt. is planning to Black Mail Pakistan by getting Red Warrants of Hafiz Saeed and 35 other Pakistanis, so that by contacting Interpol it can pressurize Pakistan. India has already started this new game by sending warrants of these persons to Pakistan. All the persons wanted by India are supporters of Kashmir Freedom movement, this proves that Mumbai attacks were staged just to kill Hemant Karkare and fit Kashmir freedom movement. Through this drama India also succeeded in diverting world’s attention form Torture Cell i.e. Indian Held Kashmir.
Chinese News Agency “ASSOCIATE OF CHINA NEWS” (ACNA) has advised Pakistan to demand all the terrorists involved in terrorist activities in Pakistan. This site has also published the list of terrorists wanted by Pakistan and expressed astonishment,
“Pakistan had prepared list of wanted persons due to increasing Indian terrorism in Pakistan since 2008 however they are reluctant in demanding these persons.”
LIST OF WANTED PERSONS BY PAKISTAN
(1) Ajay Verma, a Karnatika resident and directly involved in bomb blast at Sialkot in which 7 people were killed
(2) Manoj Shastri alias Javed Khan, resident of Mumbai, wanted for killing of 14 Namazees at a Karachi Mosque
(3) Raju Mukherjee, resident of Calcutta, wanted for bomb blast in Lahore in which 9 people were killed
(4) Mr. Bal Thackeray, resident of Bombay, Chief of Shiv Sena, wanted for organizing at least three major massacres in Pakistan in which some 33 people were killed and a highly active in organizing ethnic and sectarian clashes in different parts of Pakistan
(5) Vivek Khattri alias Kaala Pathaan, resident of Maharashtra, wanted for at least four bomb blasts in which over seventeen people were killed
(6) Ashok Vidyarthi alias Aslam resident of Ajmair Sharif, wanted for sniper shooting at an Imam baargah in Karachi, killing some 14 Shias
(7) Rajan Nikhalje alias Chhota Rajan, wanted for a number of terrorist attacks in different cities of Pakistan including a bomb blast in Sabzi Mandi Islamabad and a bomb blast in Quetta. Chhota Rajan is now launching terrorist operations in Pakistan from Indian Missions in Kandahar and Jalalabad (Afghanistan) and is head of RAW’s organized Crimes Wing or Special Operations Division (SOD), he is also wanted for killing of Chinese Engineers in Baluchistan and organizing the murder of some Chinese workers near Peshawar 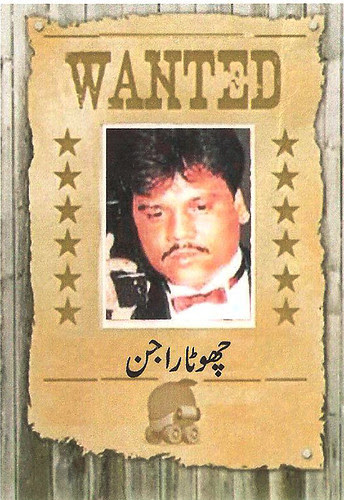