Smjhauta Express Butchery: Not Swami But Act of Indian Army...

You would have read many jokes and funny stories but the story written recently by secret agencies of India had no alternative. This is the story of a sudden confession of an extremist Hindu after four years of destruction of Samjhota Express.
The district Dangs of Indian State Gujarat’s leader of Wanami Kalyan Aasharm, Swami Aseemnand was arrested by Indian police on 19th November 2010. after one and a half month of arrest on 4 January 2011 when he was silently presented in front of Magistrate, after remaining two days in judicial custody he not only confessed that he destroyed Samjhota Express but also told names of others who were involved in destruction of train as well as bomb blasts in Malegaon, Jaipur, Dakan and Ajmer Sharif. His important colleagues are Andresh Kumar, Ram Jee, Sandeep Dange, Devandra Gupta, Lakosh Sharma, Togi Aditte Nath and Sanil Joshi. How ever Sanil Joshi died suspiciously. According to Swami hi was responsible for installation of explosives. When Magistrate asked that whether he is confessing due to Police torture or pressure he replied, “I am confessing after getting impressed by the good treatment of a Muslim. Police daily tortured him and I felt sorry for him. That Muslim prisoner was very good; he cared for me and shared his food with me. His behavior became a burden over my sub-conscious. after meeting him I realized that followers of Islam are very good persons and I have played with their lives without any reason. The second purpose behind destruction of Smjhauta Express was to defame Pakistan and ISI”. No one asked Swami that if he has been so much impressed from that Muslim he is neither afraid of his death and of his friends involved in these crimes than why he does not convert to Islam? Moreover where is such a prison in India where along with torture plenty of food is provided to Muslims that they can share it with other prisoners? Was Police forcing Swami to fast (not giving anything to eat)? But who raise these questions? Because all of this information had been released by Delhi Police in a press conference on 6th January to Indian media. As soon as the confession of Swami published in Indian newspapers, our rulers also got reminded that in Samjhota Express 42 Pakistani passengers died and many were injured. While Lashkar-e-Taiba, Jaish-e-Muhammad and ISI was blamed for these blasts.
Govt. Pakistan demanded the details of the investigations but Indian govt. replied nothing can be shared with Pakistan about investigations. On this govt. of Pakistan should have postponed any co-operation in investigations of Mumbai attacks and had demanded that Pakistani team should be allowed to investigate Samjhota Express tragedy. Pakistan should also have brought Colonel Purohit and on duty officers of Indian army involved in these bomb blasts on record because Swami has not named them in his confession while they were arrested after 6 months of this terrorist incident by ATS Maharashtar along with evidence against them and are still under custody of Police. 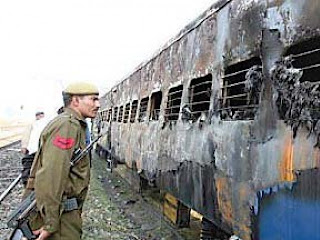 In this new situation Indian officials confess that Hindu Extremists used Improvised Explosive Devices (IED’s), due to which two bogies got destroyed by fire however detonators in other bogies could not activate otherwise all bogies would have been destroyed. Indian investigation institutions are still saying that the cause of fire in bogies was kerosene oil installed with bombs. According to them the kerosene oil was filled into plastic bottles, these bottles were put into luggage bags which were put in seven bogies on different places. Is kerosene oil capable of spreading fire in such a way that 2 bogies are burnt to ashes just within movements? Indian investigation authorities are lying and confession of Swami is also a plan to change the investigations, we will discuss this aspect later. First I would like to include an article with the title of “Mahasbhai Suicide Bomber and Chemical Used in Samjhota Express Tragedy” and few questions raised in this article and some concerns expressed in it. This article was published after 7 days of the Samjhota Express incident on 25th February 2007 in the Daily Nawa-i-Waqt. Here it is important to restate this article so that Indian game can be easily understood.
“The whole incident of attacks on Samjhota Express and burning of two of its bogies is suspicious and everyone is forced to think that;

Now let’s analyze the fire in Samjhota Express from another aspect:
India has gained much advantage in chemistry, especially in preparation of chemical solutions. Indian chemical solutions are not in demand within India but in many other countries. India is the biggest exporter of chemical used to convert opium to heroine. So the preparation of such chemical which is extremely inflammable and very sensitive is not difficult for Indians. This solution might have been being smuggled to Pakistan for some special purpose in abundant quantity and this chemical has accidentally caught fire and burnt two bogies to ashes. Otherwise from kerosene such a big fire is not possible which can burn everything within few minutes. Moreover the behavior of Indian leaders after this incident needs attention, as there some secret plan has been unveiled. In order to hide their evil intentions India showed haste in accusing Jashe-e-Muhammad and Lashakr-e-Taiba and issuing sketches of two suspects. In spite of all this govt. of Pakistan should have demanded sample of the liquid that became the cause of fire in Samjhota Express. Obviously India will reject this but world will be forced to think too many aspects. After this information should be demanded from Britain about the liquid which had to be used to destroy ten airplanes on Heathrow Airport. But after this plan was shattered on time and a very sophisticated and extremely inflammable liquid was taken into custody everyone was astonished. If the passengers have tried to take this liquid into the airplane no detecting machine of the world would have been able to detect it.”

Keeping in view the above concerns think over the present situation. Pakistani govt. wants the details of investigations conducted by Indian govt. The information that is going to world is only that which Indian govt. is allowing i.e. the group of Hindu Extremists have been arrested and brought in front in court. The central culprit has confessed. The more shocking aspect is that from RSS to Bajrang Dal in India all are silent, even BJP has not reacted to it. The persons who keep on eye on the Indian politics should must have been aware that all the accused who have been brought forward in case of Samjhota Express belong to “Abhinav Bharat”. This is a organization of Hindu Nationalists registered in Maharashtar. It is also known as sub-organization of Indian BJP. Without this organization BJP has no presence in Maharashtar, Gujrat, and other provinces. Although these arrests have been made under “criminal procedure” however in order to save actual culprits of Samjhota Express these arrests will be molded as political arrests. This is the reason behind the silence of Hindu Extremists. 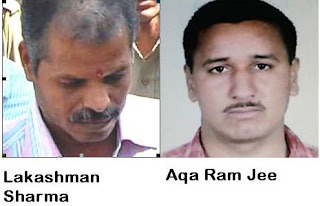 On the other hand an organization registered as charity trust in Mumbai in January 2002 is also named as “Abhinav Bharat Trust”. The supervisors of this trust have registered a writ petition in Mumbai high court in February 2009 about its identity and rights. The defendants of this case were some Hindu Extremists arrested under the accuse of Samjhota Express tragedy. Look at the coincidence which is very astonishing that the daughter of “Natho Ram” murderer of Mahatma Gandhi on 30th January 1948 “Hemant Swarkar” is one of the founders of trust and on the top of list in the above mentioned case. But is this also coincidence that Swami and his friends has confessed of being involved in those blasts, for which Hemant Karkare has arrested Colonel Purohit and Major Apadhley and stated that still 8 more culprits are to be arrested? These culprits included 2 on duty Brigadiers, 3 Colonels, 2 Majors and 1 Major General; Karkare had requested permission from Ministry of Defense to arrest them. Will discuss this important coincidence next week…
To Be Continued…
Click here to read Part-II
Written By Khalid Baig,
Published in Daily Nawa-i-Waqt,
Date: 22 January 2011.
at 10:55 AM