Till end of 1980 Soviet army has been busy with Mujahideen
and had forgotten to capture Gwadar and acess to Gulf. It was becoming
difficult for them to keep hold outside of big cities including . Although on all
important roads and entrances to cities Check Posts were established, day
passed calm fully but as soon as dark of night spread Mujahideen used to appear
suddenly and target Russians. In the start Mujahideen used “Mark-I Three knot
three” to target Russians its chamber cannot hold more then 7 bullets at the
same time. Some groups also used “Kalashnikov”. In short time they got access
to Machine Gun and Rocket Launchers and other automatic weapons. These weapons
were snatched from Russian forces during Gorilla attacks. Some Russians had
been selling weapons for drugs. Moreover deserters of Afghan army also joined
Mujahideen along with heavy weapons. What difficutlties were being faced by Red
Army could be imagined from this statement of their Chief “Marshal Sergei
Sokolov”, which he said in an address in
on 14th January 1981 to encourage his soldiers. Look at a paragraph
out of his emotional speech, which was being broadcasted and published by
international media till end of the war;
“When you are wounded or left on ’s plains and women came
out to cut out with remains. Just role your rifle and blow out your brain and
go to your God like a Soldier”.
When got sure that Soviet Army has been badly trapped into , by increasing capability of
Mujahideen's Gorilla warfare and equipping them with modern weapons, the Soviet Army
can be defeated and American defeat in could be countered. In 1982
they started talks with Pakistani leadership, in this lieu help was also sought
from
because their contacts with General Zia-ul-Haq were not good. In this way
American got involved in Afghan war. May anti-army intellectuals of Pakistan
(most of them are also anti-religion as well) are still on the stance that
Pakistan was fighting war with Afghanistan in 1980’s decade and if America had
not came forward to help, Russia could not had been defeated. I will request
all my friends who have such like thinking that they should restudy the history
of Russian’s arrival to
and the purpose behind capture of . They will understand
that resistance war against Russians have been already started by Afghans
before the sunrise of 1980 without any external support. When Pakistani support
became a part of their Gorilla activities the scenario of war changed. This was
a war of sovereignty of
and which was
mutually fought on every inch of . However
succeeded in getting credit for Mujahideen’s victory through proper propaganda.
Otherwise if
had not helped, would Afghans have accepted defeat? Had they given up their
history of thousands of years not accepting defeat in front of Red Army? My
friends having such like hypothesis should look at the look at Afghan
resistance against
that in last 9 years in spite of all types of tortures, murders, and weapons
has been unsuccessful to defeat them. What type of destructive weapons which has not
used there? The condition of higher command in is morally so much
shallow that on 18th November it was announced, “Now America will
first time use latest tanks M1 Abrahms against terrorists (Afghan Freedom
fighters). Initially 16 tanks will be used in Hilmand later on they will be
used in other provinces too”. That news was published on 19th
November. 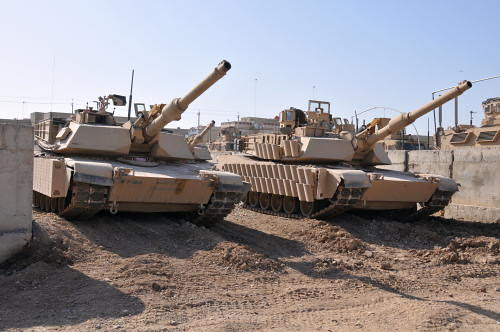 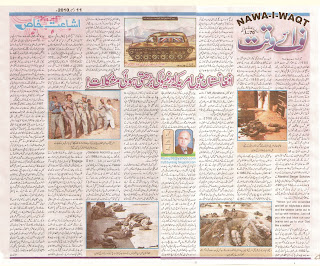 Are You On Mobile? Click Here
Written By Khalid Baig,
Published in Daily Nawa-i-Waqt,
Date: 11 December 2010.
Blogged with the Flock Browser
at 9:44 AM

Email ThisBlogThis!Share to TwitterShare to FacebookShare to Pinterest
Labels: America in Afghanistan, History of Afghan War, Reasons for american attack on afghanistan