The Use of Propaganda Against Pakistan and Worried Public!

3rd round of Pak-America Strategic dialogues in which “13 working groups have visited America under the control of Pakistani Ministers. America not only rejected to interfere on Kashmir problem but also silence on the murder of innocent Kashmiris”, American Lolly Pop of 2.29 billion dollars for aid and it will be issued in 2012 after acceptance from the American Congress. While as a response to this Pakistan will have to show its vigilance (Operation in North Waziristan in the name of so called War on Terror) in 2011 in all circumstances. On the second day of announcement of defense aid of Pakistan the threatening statement of White House that if America is not satisfied with operation against Terrorism Pakistani aid can be stopped. The claim of British Newspapers that after the release of video in which uniformed persons are murdering six innocent people, Obama administration is concerned about it. Moreover on the violation of human rights the aid to these half dozen units of Pakistan army which are involved in war against terrorism has been stopped. However these newspapers have not made it clear that the hundreds of Pakistanis murdered in Drone attacks fall in the illegal murders and human rights violations or not? Moreover they have not cleared that is Obama Administration concerned with the reports on “WikiLeaks” that only in Iraq from 2004 to 2007 American army has murdered 67 thousand innocent, unarmed Iraqis on its posts. Till the last weak General V.K. Singh crying over Pakistan's nukes falling in the hands of Taliban has suddenly changed his stance and issued statement that Pakistani nukes are safe and they have no threat of falling in the hands of terrorists. Then is this a chain of American President’s pilgrimage to India so that Indian face contaminated with the blood of minorities could be washed or a struggle to reinforce American stance, “Pakistan has no threat from India so Pakistan should send its troops to North Waziristan”.
However there are many such like incidents about which questions are in the minds of Pakistani people, but I would like to get attention of readers towards propaganda on international level against ISI, Pakistan Army and especially against Pakistan. But in order to save ourselves from this important weapon of all times neither our rulers have not devised any plans nor our Media (especially TV) have any time to respond to this propaganda. Although our intellectuals, writers, media masters all know that it is working against us as double edged sword. Through this on one hand the pessimism in country is being spread so that Pakistani public loses trust on Govt. institutions, they think themselves as powerless and become doubtful over the integrity of country and their future.
And on the other hand “on the international level Pakistan could be posed as center of problems and failed state, and its administrative institutions are unable to solve problems of the public. It could be posed that in Pakistan lawlessness and corruption is common and this has provided safe heaven to Al-Qaeda and other extremist organizations. Vicious circle of poverty is cause of religious extremism which is now spreading as the fire of jungle. And if it is not stopped it will engulf the whole world.
Like this there are many intellectuals within Pakistan in addition to America and Britannia who think that in order to safeguard International peace the war of terrorism of America and Britannia should be shifted to our own province Khyber P.K. from Afghanistan. Because according to them religious elements present in the ISI and Pak-Army is not only supporting Taliban in Afghanistan (the Afghans resisting against American capturing of their motherland) but will also resist in operation in North Waziristan. Then is this not the magic of propaganda that has convinced world that all countries around Afghanistan are loyal and supporting to America, from them no interference is being done in Afghanistan. Neither they are concerned that America continues its capture of Afghanistan through power or destroys it with the latest weapons, nor they have any geographical interests linked with Afghanistan?
For Example: 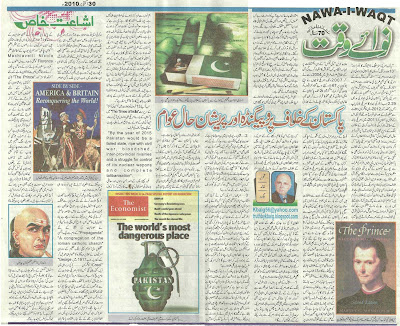 Email ThisBlogThis!Share to TwitterShare to FacebookShare to Pinterest
Labels: Arthshastra, history of propaganda, Kotliya Chankiya, propaganda against pakistan, The Prince