Soldiers Cannot Be Given Pension Out Of Defense Budget

In the reign of General Pervaiz Musharaf when the book of Dr. Ayesha Siddiqa “Military Incorporate” was published it was given much publicity. Even the foes of army rejected the opening ceremony of the book in a hotel that govt. has banned the book although it was not so. In spite of this protest was broadcasted on CNN and BBC against the banning of the book. The Chief of Army was President of Pakistan, due to the discipline army was duty bound to follow its chief and was a target of criticism. Due to this no one raised question that who is the writer who has earned cheap fame by writing against Pakistan army, the NGO who sent her America on Fellowship and Scholarship belongs to which country. The research thesis and the title of book during fellowship was a coincidence or pre-planned. Moreover who was behind the publication of book? It is possible many readers know about it and those who don’t know will have to conduct search on internet and they will get the answer (But internet cannot disclose that why the name of that author was put into the Pakistani Panel for Back door diplomacy with India).

Due to army’s repeated interference in govt. in spite of all the hatred and concerns about Pak-army this is an undeniable truth that Pak-Army is the only institution which stands as an iron curtain in the damn interests of enemies of Pakistan. Enemies of Pakistan know that in the presence of strong Pakistan army the greatest flood or attack cannot harm integrity of Pakistan. In 2001 when after 11 months of besiege Indian army was forced to retreat (defense analysts and historians take it as defeat) then Indian rulers have no other way but to follow rules of Chankiya i.e. to defame Pak-Army within Pakistan so that public hates them and soldiers become hopeless. Morale of army is destroyed and after this capturing Pakistan will be easier for them. In order to practically impose thinking of Chankiya meeting was conducted for three days in New Delhi Parliament in 2003, participants included opposition, chief of RAW and higher officials of army in a closed session. When the meeting ended all were agreed on one point that Pakistan army should not be only defamed in Pakistan only but in the whole world. International community should be brain washed that in the presence of this institution (Pak-Army) of terrorists the peace of world is impossible. Moreover wherever incident of terrorism happens Pakistan should be condemned and blamed for it. For the propaganda a think tank was formed under the supervision of ex-chief of RAW B. Ramin and many officials of RAW were ordered to work for it. This think tank is provided with billions of dollars so that international media could be bought for propaganda against Pakistan. Moreover Pakistani writers and authors living abroad are paid for writing books against Pak-Army and ISI. When these books were published the analysis on these books on international was also responsibility of this group of RAW, and they are fulfilling their duties even today.

Now when Pak-Army is away from play of power/govt. in the country, always busy in serving the nation from Peshawar to Karachi in the devastation of floods, the army has responded to these natural calamities in such a way that one cannot find an example of this. In spite of mutual quarrels of politicians, corruption, lawlessness, and inflation army is working day and night to remedy the devastation of flood. Army has proved on every level that it is an institution of Pakistani govt. that it has no intention to intervene govt. in spite of this propaganda against Pak-army is going on continuously. On the 23rd of September an English newspaper member of “Aman Ki Aasha” published an editorial titled “Military Perks”, everyone was astonished that at the time Dr. Ayesha’s book a propaganda campaign was going (although even at that time the criticism of whole army was not justified) but now there are not such circumstances that by disputing facilities to army the soldiers busy in the relief work for flood affectees are forced towards desperation. Although in this editorial the questions raised by Public Accounts Committee were discussed that why army is not paying pension out of defense budget which is 72 billion rupees while retired persons of civil institutions has a budget of 18 billion rupees. The purpose of this editorial was to convince general public that army is utilizing the major part of the budget and after this nothing is left to serve nation. Here the astonishing fact is that one week before publishing of this editorial think tank of B. Ramin has discussed this in “South Analysis Group”.
The process of criticizing Pakistan army is not limited to newspaper editorial or one article of newspaper. On 26th a federal minister blamed Pak-army for murder of Akbar Bugti, Zulifqar Ali Bhutto and Benazir Bhuto during his visit to Bugti House Quetta. That minister was responsible for defense production. In these blames that minister also used unethical words against army and Chief Justice of Pakistan. After two days law minister of Punjab in spite of praising Pak-Army in relief work gave a statement that army is doing publicity of its relief work. After this the statement of Public Accounts committee was seen that audit of donations to army’s relief account will be conducted.

Why all this is done? Are politicians threatened that due to poor economy and lawlessness army may recapture the power or govt.? If the reasons behind criticizing Pakistan army are such like concerns then army has cleared it several times that it has no such intention. In such circumstances our politicians, rulers and leaders should correct their administration, try to remove those shortcomings within and out of country which are a cause of trustlessness over Pakistani govt. but in spite of this they have got afraid of nation’s trust over army and are trying to defame it.
Now let us discuss pension of army. But before this I would like to mention Indian defense budget so that we can understand inevitable expenses of Pak-Army. In India the defense budget of this year is 1.47 trillion meaning 32 billion dollars and pension is not paid out of it. Moreover Indian defense ministry has reserved 5260 billion rupees for latest missiles and weapons which are used by “Defense Research and Development Organization”. In order to modernize the army India has reserved 700 billion rupees in addition to defense budget and the most threatening amount for integrity of Pakistan are 42 billion dollars through which India will purchase latest American weapons. Now consider how India is converting itself in cache of latest weapons and its plans over Pakistan that in near past it has two times besieged Pakistan and had to retreat. What else could be shame for a country who wants to be the boss of Asia? Now think yourself that to tackle such a big enemy Pakistani defense budget is only 5 billion dollars i.e. 442 billion rupees and if you add 72 billion rupees it just goes to 514 billion rupees. In contrast to civil employees a soldier is on duty 24 hours a day and after retirement he can be called back anytime for five years.
Then analysts making comparison of civil and armed forces employees have not told the nation that major part of the armed forces consists of army, naval and air force soldiers who get retirement after serving for 18 years at the age of 36 or 38. In the same way the majority of officers get retired at Major level and at the age of 42-44 they are retired. In case of Colonel or Brigadier add 3-6 years. Now pay attention that in the civil institutions even a peon is retired at the age of 60 years. And moreover army is a defense institution which gets pension from federal budget. In contrast to this there are many provincial civil institutions which get pension from provincial budget. Then railways, PIA, Pakistan Steel Mills etc also get pension from Federal budget which is not separately mentioned. Although govt. gives them grants from which pension and salaries of employees are paid. If any expert of finance calculates actual total of civil institutions after deducting retirement ages of soldiers then in comparison to 72 billions, 18 billions of civil administration will 180 billions.

However here the real problem is not of the facilities provided to army or pensions but the army as an institution. There are such authors and intellectuals who are against having any army. And there are plenty of such pro-Indian businessmen and industrialists who want that Pakistan becomes a subsidiary of India and gives up its stand on Kashmir so that there is no need for army. Astonishing fact is that persons having such damn thinking all are Pakistanis who have got fame, respect and wealth all from Pakistan. But they are filled with the wish of being enslaved by Hindus and they want that whole nation becomes slave to India. I would request all these peoples to get Indian visa and enjoy their real slavery of Hindus. Let us live as a sovereign nation. These circumstances are although difficult but we will pass from them. Everyone will get correct and if we do not have to live like a sovereign nation then our leaders should collect courage and dare to announce that it is our superior and from to now on we will not maintain any army because India will protect us like Sikkim, Nepal and Bhutan.
As the point of discussion is pension of army so in the end I would like to mention that in our area China and India, moreover all the major powers of world pay pension separately from defense budget…
Urdu Copy: 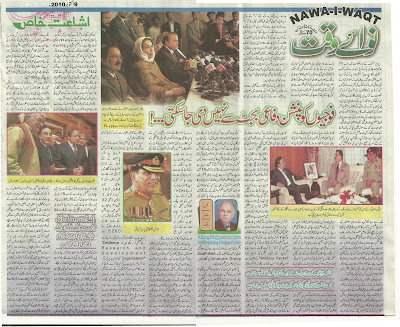