How longer we Pakistanis will be Sacrificed for American Interests…? 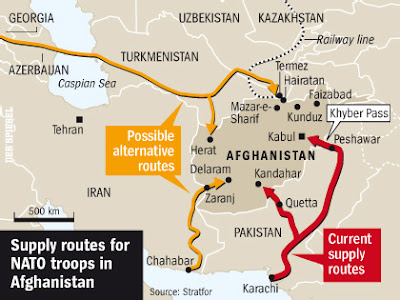 When Taliban came to power in Afghanistan they had no quarrel with American establishment. Taliban govt. was accepted by Saudi Arab, United Arab Emirates and Pakistan on American will. In this way Taliban were supported by Washington undercover. Because they were formed and supported by America. At that time there was no presence of Al-Qaeda, however Taliban were termed as “Extremist Muslims” enemies of American Interests. The ruler of Afghanistan and 90% of Mujahideen were well known by CIA in 1980 and with some they had friendly contacts. Moreover American officials were aware of civilization of Afghanistan, their mutual disputes, and American also knew that Pashtuns living there will pass centuries in war but will never accept a non Pashtun as ruler.
However Americans have their own history that on completion of their interests they become enemies of their friends and even don’t mind even sacrificing their friends for their interests. In the cold war with Russia the access to the Central Asian Stated was American dream but they have never dreamed that on disintegration of Russia the Muslim States (filled with mineral resources) who got freedom will remain under its control. These were the resources which were captured by Russia but in order to stop their access to outer world Russia broke into pieces. Russia has also utilized anti-Pakhtoon tribes in Afghanistan and non-religious (Communists) Pakhtoons as crutches to capture Afghanistan. Definitely same mistake has been repeated by Americans. When Central Asian States got freedom America was in a hurry to arrive to their natural resources however internal lawlessness and wars in Afghanistan stopped its way. That civil war in Afghanistan was also created by Americans because if America has accepted General Zia’a formula for Afghan representative govt. in Afghanistan before Russian Forces left Afghanistan then the circumstances would had been different. But this is not our today’s topic. In order restore peace in Afghanistan Americans struggled in several ways, formed and supported Taliban but as per their nature they became independent. After defeat after defeat Americans impatiently decided to attack Afghanistan with the support of Northern Alliance. 9/11 was just a lame excuse and moreover in order to make Terrorism a global threat in different areas of Europe activities of terrorism were planned and held. So that in order to punish Al-Qaeda or Taliban European support could be achieved for Britain and America. (Now terrorists in America and Europe are reaction of American activities and policies).
At the time American and allied forces attacked Afghanistan to free Afghans from Taliban they have not even imagined that Afghanistan will prove a deadly land (marsh) for their soldiers in which they will be trapped. When American and allied forces launched attack then how can Afghans having traditional guns face latest fighter air crafts, missiles and cluster bombs. They got destroyed (murdered) in the rain of dynamite and iron and those who survived hid in mountains. This was posed by western media as victory. Otherwise in the way allied forces entered into Kabul as Victor it should have ashamed of calling itself as “Liberator”. But they are not even ashamed of even attacking Iraq under the lame excuses of Iraq having weapons of mass destruction. And they also don’t feel shame while accepting that all the reports about Iraq’s weapons of mass destruction were fake. 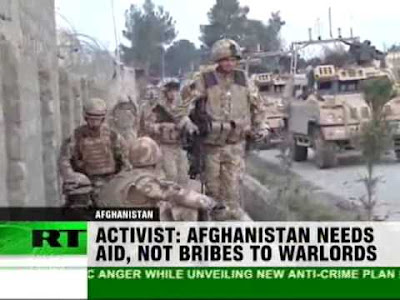 After massacre of hundreds of thousands Afghani’s when Americans captured Afghanistan they hoped that under presence of UN resolutions and Allied forces Afghan’s will not dare to resist and by making a pro-American person like Hamid Qarazai president they will be able to convince Afghans that Americans have freed them from Taliban. In this way they will be able to capture Central Asian States and their mineral resources by using Northern Alliance. But bad luck for Americans that Afghans could not be deceived by this trap. Moreover in the way Northern Alliance have massacred Pakhtoons, built towers of their skulls this has forced Afghans to resist till death. With the passage of time not only their resistant has grown stronger but they also discovered that Americans is good in fight through latest missiles and laser guided bombs but in spite of having all the automatic weapons NATO and its brave soldiers does not have courage to face fighters/militants. Now when the American war on Afghanistan is going to enter in tenth year there is no sign of victory for allied forces. Which military tactic which has not been used by experienced Generals of western forces to change the scenario of war field? Even in spite of having full control over western media and propaganda they have not been able to save their soldiers from psychic of having Pakhtoon fighter being superior to them in face to face war. Although they have also continued the propaganda that they are on war with Al-Qaeada or Taliban extremist Muslims who are struggling to destroy the peace of whole world. But after countless sacrifices of Afghans now world has started to realize that they are fighting for their independence and identity and will continue fighting till a single soldier of allied forces is present there.

On the other hand there is such an influential lobby present in American and Britannia who are trying since 2001 that America targets Pakistan in spite of Afghanistan due to their interests in Indian markets. From last 9 years American Think Tanks have been accusing that tribal areas of Pakistan are safe heavens for terrorists from where these terrorists attack allied forces in Afghanistan. American officials also show such concerns. They wish Pakistan treats Pakistani Pakhtoons in what they have done to them in Afghanistan through massacre. When Pakistan rejected this order from America some miscreants were purchased from tribal areas and attacks on Pak-Army were launched. This was sponsored by Indian Consulates present in Afghanistan and in no time whole Pakistan jolted with suicide bomb blasts. But in spite of uncountable casualties Pakistan army practiced patience and conducted successful operations in Malakand and Swat. Moreover through restoring peace in these areas army proved that terrorists were entering into Pakistan from Afghanistan and had taken locals as hostages to act upon the agenda of anti-Islamic and anti Pakistan forces. In spite of countless sacrifices of Pakistanis in so called war on terror Americans have not been satisfied and after Drone Attacks they started attacks through Helicopters. On Drone Attacks whole nation was protesting and aggression of NATO supplied fuel to this fire, so it was impossible to keep silent on this matter. 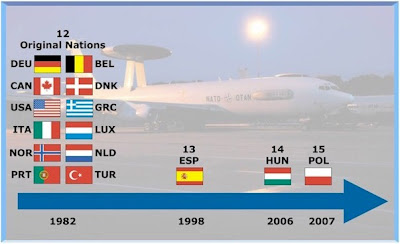 Govt. of Pakistan showed courage and cut down the supply of fuel and other necessities for NATO and allied forces via Turkham, Qandhar. Americans were not prepared for this, they could not even imagine that Pakistan after being used to Drone Attacks will take such a harsh step for NATO’s aerial violation. But Pakistan not only astonished NATO and Americans but whole world. Now America had three ways, via Turkmenistan to Herat, or from above in a long journey from Uzbekistan to Mazar Sharif. To use these both ways America and NATO had to make deal not only with Central Asian States but with Russia. For this NATO countries were ready but America was not ready to make a deal of loss. Moreover from Iranian coast to Afghanistan a road built by Indian engineers is also present. (In Afghanistan Dil haram to Zarang road was built on Indian expense/investment). As long as NATO’s supply from Pakistan was closed many intellectuals were thinking that now as America wants to shift to its war in Pakistani province Khyber P.K. (NWFP) so it has no way to forget all of its disputes with Iran (means ignore interests of Jews and Israel) will go to talks with Iranian govt. in order to change its so called war on terror in apparent victory. However after ten days of wait America not only itself apologized but also made NATO to apologize. This was not less than a shock for many of our intellectuals. They showed this in their columns warning Pakistani public, “Get ready for American wrath because it has apologized but it will never forgive that crime of Pakistan”. Now one should from these writers that had American left any stone unturned? But first time America and world has realized how can they benefit from Central Asian States without Pakistan via Afghanistan when they cannot continue just their hold on Kabul without Pakistani support.
Now when America and NATO forces have apologized now it is needed that govt. of Pakistan gathers and makes it clear to America that they are not ready to be a fodder in this so called war on terror. If America is trying to negotiate with Taliban or Al-qaeda (which has been claimed by America as terrorists and extremists) for its respectful departure from Afghanistan then it is also right of Pakistan to start negotiations with angry tribes for peace in the country. This should be made clear on America that Pakistan will not target its tribal areas in the name of operation for Pentagon. Moreover under the cover of American Diplomats or in the form NGO’s (growing as wild berries) busy in relief work, the enemies and agents hidden in them should must be kept under observation and for tackling them a comprehensive plan should be made. These hidden enemies could become problem for us near future.
Note: In this number of serious casualties who died afterwards is not included. Moreover 2010 has not ended yet. 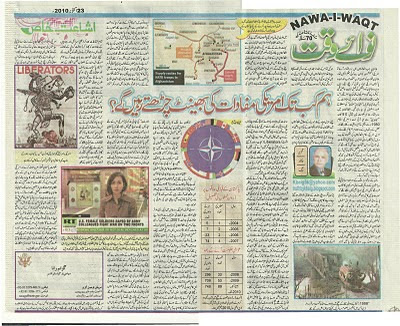