The Hidden Purposes Behind Threats Like Burning Of Holy Quran…


We used to think that in a developed country like America, civilized and cultured and preacher of democracy, the political parties in order to save their political credibility do not use threatening and such like ways of 3rd world dictators to gain little political benefits. Leaders there (in America) do not hurt others feelings and follow their own rules of humanity and respect others feelings. But now we realized that the situation there is worst than poor countries like us. Look at the threat of burning Holy Quran by an infamous Pastor of Florida. American government remained silent for two months on the statements of this pastor against Muslims and Islam. In order to keep the incident of 11th September alive and for political benefits a person of bad repute and criminal nature was given full chance and support so that he can continue his provocative propaganda against Muslim Ummah. And when protests in the whole world started then damned Pastor was banned however neither he is arrested nor any he has been questioned for his damn campaign. And it has been shown that American government is powerless in front of law of freedom of speech. Although damned Pastor has not burnt Quran but his followers has shown their hatred against Muslims by burning Quran.


This thing is beyond understanding that why in America and Europe the meaning of freedom of speech is that whoever wishes can disgrace and start a campaign against Muslims, Islam, notables in Islam and Prophet (SAWW). Make cartoons of Islam, disrespect and burn Holy book of Muslims? In Europe and America there are many groups who do not follow any religion how ever no one has been authorized to burn Bible? Give me a single example. Reality is that the nation in which people hating religion have made separate churches for homosexuals in order to show their hate against religion, even they have not ever dared to burn Bible. They do not do such like acts because they know that persons doing such acts will not be forgiven by law and society. Then why threats of burning Quran and fulfilling these threats as well? Just for providing reason for massacre of millions of Muslims in the war against Muslims continuing from last decades in the name of Talibanization, terrorism and extremism?  Not only for that but for continuing the process of targeting Muslims to fulfill damned interests. Now the Muslims living in any part of the world are suffering from psychological torture. Actually in Europe and America after 9/11 the process of spreading hatred against Muslims is going on. But still American government is unable to decide that how much Muslims it will have to murder to prove that America is not guilty of it.

Many Muslims have felt some type of conspiracy when Mayor of New York Michael Bloomberg has announced the construction of Mosque on Ground Zero (the place where two Towers were destroyed in a terrorist attack). Apparently that announcement was to show respect in American government for Islam and Muslims. After this a wave of happiness spread in Muslims. But no one liked to think that murderer of millions of Muslims in Iraq & Afghanistan, supporting by their silence on the bloodshed of Muslims in Kashmir and Palestine how can be they so much well wishers of Muslims that a disputed incident which has it hard for Muslims to live, world has been changed in hell for Muslims, why their govt. likes to build Mosque on that place? On the one hand the ruler Democrat party succeeded in gathering Muslim support. The protestors against Drone attacks were easily silenced, “Lo! How much Americans are kind to Muslims, they are helping us to destroy terrorists and moreover the buildings which were destroyed by these terrorists’ attacks they are building Mosque there”. On the other hand the anti-Islam groups of America were given a chance to play with the feeling of Muslims.

In an infamous area of Florida “Gainesville” the Pastor of a small church “Dove outreach Center Christian Church” Terry Jones announced a plan to burn Holy Quran on 11th September, before this in many states of America protests have been started against construction of mosque on ground zero. “The Ground Zero mosque” which is being called as “Park 51 Project” by American establishment, to stop this hundreds of Americans marched against Muslims and Islam; they held placards on which provocative sentences were written. At that time if American govt. had tried to remove concerns of protestors or called their leaders and had conducted talks with them about mosque, then perhaps this problem had been solved before announcement of burning of Quran, but American officials ignored this. The anger of protestors against mosque grew and the extreme of this was the announcement of burning of Holy Quran by Terry Jones. On this American kept silent. Jones wrote his plan of burning Quran on a Truck and started visits of other areas for getting maximum support. As 9/11 grew nearer the protests from Muslims also got severe. 2 days before incident General Patrios appealed to Pastor to terminate his plan otherwise due to his act the war against terrorism in Afghanistan will get weakened. Moreover the threats to American soldiers will also increase. American president also expressed such concerns. That by burning Quran Al-Qaeda will get stronger. Now look at the shamefull way of stopping a criminal Pastor, in response to this Pastor replied in a press conference;
“Instead of us being blamed for what other people will do or might do, why don’t we send a warning to them? Why don’t we send warning to Radical Islam and say don’t do it, if you attack us, we will attack you”.

Moreover General Patrios and Obama were not concerned about burning of Quran but about their damned interests in foreign countries and lives of their soldiers. American media did not remain behind; an article “More Muslim Hypocrisy on the Quran Burning” was published on 8th September in different newspapers of America. In this article in spite of condemning Pastor’s statement Muslims were criticized that;
“If in India the Quran is burnt neither there Islamic world gets provocative nor protests are conducted, and then why not say that protest on “Pastor’s announcement” is based upon hypocrisy and is a part of a campaign to spread hatred against America”. The above article we leave aside but this is a bitter reality that in India in order to show hatred Quran by extremist Hindus is a usual thing and this is also true that not in any single Muslim country protests have been staged. Moreover 40% of Indian trade comes from Saudi Arabia.

The problem of Muslims is that they cannot burn books of other religions due to Islamic values and rules. Bible, Torah and Zabur are part of Muslims belief so their respect is must for Muslims. Sacred books of Hindus Bhagwat Geeta, Ramain or other waids the burning of these books is quite far Muslims have not even disgraced them. But contrary to this disgracing of Holy Prophet (SAWW) and burning of Quran is being used by America and Europe as psychological weapons. It is done in the name of freedom of speech but ground realities are different. In the following incidents you can easily analyze the hypocrisy of west and their laws about freedom of speech.

In 2003 secret police of London raided flat and mosque of an Islamic cleric belonging to Egypt Mustafa Kamal nick named Abu-Hamza. This was shown there was dress used in biological warfare, equipment used in making videos, pistol and few tempered passports but astonishingly Abu-Hamza was not arrested by British Police. On American pressure they arrested Abu-Hamza in May 2009 and in investigations of 5 months they could not prove him a terrorist. So they registered 15 different cases against him, one of them was about keeping a book about Jihad in Afghanistan. When court demanded proofs Police had nothing to represent except recordings of his speeches in mosque. In these speeches Abu-Hamza has taken free sex, alcohol and democracy against Shariat. When these recordings were discussed in court he accepted that these recordings are of his voice and said that he thinks stopping Muslims from evil is his duty and in the future he will continue to stop Muslims as well as non-Muslims from evils. British police requested to the court that to punish his acceptance that while living in “civilized and liberal” society like Britain (where human rights are respected) he is involved in provocation humans against humans. Court sentenced him for seven years in prison.

Contrary to this the leader of British National Party “Nick Griffin” and his vice “Mark Collet” were arrested by British police on complaint and protest of Muslims. They were accused of speeches against Islam and Muslims and provocating people against Muslims. They used to say Islam as “Vicious Wicked Faith”. During the discussion in court both accepted the accuse and took the stance that they have not disobeyed British laws. They have talked against Islam which is not a crime in British law. They were freed. During this case that fact came to front that criticizing Jesus or Christianity is a crime in British law. Moreover even the Sikhism is given religious protection but Islam and Muslims have no respect.

Now the condition of American and other western media is that American Generals go in uniform to churches and make speeches on war in Iraq and Afghanistan. They claim it necessary for protection of American public and try to convince by calling deaths of innocent women, men and children as coincident, no one calls them extremists. Every second issue of NewsWeek and Time is filled with propaganda and hatred against Muslims. This right has been given to them by law of freedom of speech, while if our media protests against this it is silenced in the name of spreading extremism. I remember when ex-captain of Pakistani cricket time decided not to shave bear Weekly Time made fun of him in these words;
“Pak Cricket died at 3 am today. The funeral will be held on March 21st after the match against Zimbabwe and Maulana Inzamam-ul-Haq Multani will lead the prayers”.

This is usual behavior and treatment of West against us; Muslims. However this is duty of our rulers and media that they show mirror to the damn extremist face of west or continue their jobs on the salary they get due to which Muslims has to face disgrace over their identity. 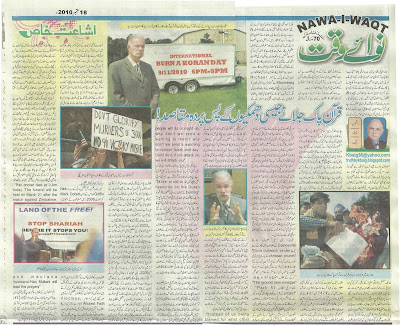 Email ThisBlogThis!Share to TwitterShare to FacebookShare to Pinterest
Labels: Burning of Quran, effort to increase millitants for Al-Qaeda by america, Hurting Muslims feelings