Are we not able even to provide moral support to Kashmiris…? 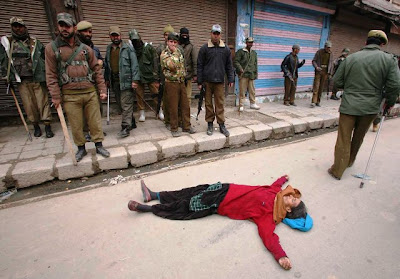 A Kashmiri Women Killed By Indian Forces... due to curfew no one there even to cover the dead body!

Remember about Freedom Flotilla’s incident some days ago which was carrying aid for besieged Palestinians. Whole was protesting against the arrest of our anchor person by Israelis. Whole media was protesting. In the midnight, of , Holbrook was awakened for support and was told about the feeling of the Pakistanis. So that Pakistani journalist can be freed at once, although the arrested included 650 old men, and a dozen of women. The incident of Flotilla is an activity of Turk Govt. which sent aid to Palestinians in spite of having relationships with , made whole world to condemn Israeli violence and think about the poor situation of Palestinians. Whose (international community) ears have been deafened after the incident of 9/11 due to the noise of so called War Against Terrorism so that they can not hear the screams of Palestinians.
Now a day’s same situation is being faced by the people of Occupied Kashmir. What is going on with them, no one knows. Little news that are being leaked through different sources mobile, footage, internet, Facebook etc are enough to make one worried. Reporters of different agencies who have tried to record or report the torture by Indian forces have been severely tortured, now they are in hospitals after getting their bones broken.
No one knows what is going on in Occupied Kashmir? The duty of keeping the world up to date with the Kashmiris poor situation was done by Pakistani media. However now here is grave silence. The silence of one group of media is acceptable that they doesn’t want to destroy the house of newly wed “Aman Ki Aasha”. But why the other free media is silent. It seems that only Nawa-i-Waqt and Waqt T.V Chanel is responsible for raising voice for rights of Kashmiris. Where are those who were crying against the torture of on a Pakistani reporter? Can’t they see the poor situation of ? If they are hesitant to talk about the rights of Kashmiris they should protest only for their brethren Kashmiri journalists from whom Indian govt. has snatched their pens.
In reporter of Kashmir Times on 12th July titled “Crackdown on E-protestors: Terrified Users Leave Valley” warns the users of internet especially of “Face book” to be careful writing or posting pictures of the Indian torture in . He says;
“Next time you wish to register your protest against the on going crisis in the valley on social net working sites, make sure you exercise utmost restraint, else you would be behind bars”.
The reporter has given examples of many Kashmiris who had been arrested for using Facebook for their rights, or they were forced to leave valley. The interesting incident is that one of them included a lame student. He was accused of stoning police setting a fire on govt. vehicles, when police went to his house they realized that they have registered a wrong FIR. So in order to avoid more errors police took away the computer and other devices, and warned them that if they again tried to protest against govt. whole family will be arrested for stoning and burning army and police.
In the occupied during last four weeks curfew has been imposed in eight cities. A new history of torture and violence is being written which has no example in past. Under the supervision of army an unending series of torture is going on. On the one hand is the army equipped with lethal weapons while on the other hand are the teenaged students. They did not have Kalashnikovs like Mujahideen but stones through which they express their hate against army. And like spray of bullets in response to stones now in too the stone throwing children are being targeted by bullets. In this way like Israel Indian govt. has also adopted new policy to crush the freedom movement. Which has two points:
a)      Use of army against protestors like .
b)      Direct fire on teenagers and children
Let’s first talk about the use of army, in first time in the history of freedom movement Indian army has been called to control protests in and other big cities. Coz police and Border Security Forces have been unable to protests in spite of using curfew and all other ways of violence. Before that in 1989 when the activities of Mujahideen were on peak, at that time army was used out of cities in jungles or LoC but the whole activity in cities was taken by police and BSF. However in 1993 when Mujahideen occupied Hazrat Bal Mosque and at the time of attack on special headquarter of anti-terrorism wing in the army was called. Coz the Mujahideen were equipped with such weapons which can’t be countered by Police.
A young girl trying in vain to save her brtoher

Astonishing fact is that in like police Indian army has failed to control young protestors. In the first day of military imposition 17 people were killed after which people got out of their houses ignoring curfew. That incident occurred on Thursday, the next day was Friday. So keeping in mind the date of protest on which the people would have came out of mosques after offering Friday Prayers, and protested against . To stop that protest following army banned offering of Friday Prayers and Mosques were locked and armed persons were put on guard. Was that done on purpose or Indian army has no other way? However four weeks have been passed in mosques of with out the sermon of Friday and daily 3 people are being killed after calling of army. Target of tyranny of army are also those people who were present in their houses and were shot dead by automated rifles of army. 31 year old Naseema and 25 year old Abdul-Hafeez Lon was target of such bullets. It also includes a young infant of 11 days who left that world after being hit by a stray in his mom’s lap.
Whole world knows that army does not fire in air but to murder and Indian army is doing same thing in . All are astonished that why has brought army to tackle peaceful protests like . Do the rulers of think they can control freedom movement in this way? When Human Rights Activists protested against torture of Indian army over Kashmiris and their genocide, Indian defense ministry passed a new act, “Armed Forces Special Powers Act (AFSPA)” in order to protect and give right of genocide to Indian army. The above mentioned slavery act was passed by the largest democratic state of Secular world on 11th September, 1958 to crush freedom fighters in Arunachal Pradesh, Assam, Manipur, Meghalaya, Mizoram, Nagaland and Tripura. However in July 1990 it was also imposed in Occupied Kashmir under the name of AFSPA(J&K). in order to understand this act its only three points are enough:
§                     "Fire upon or otherwise use force, even to the causing of death, against any person who is acting in contravention of any law" against "assembly of five or more persons" or possession of deadly weapons.
§                     To arrest without a warrant and with the use of "necessary" force anyone who has committed certain offenses or is suspected of having done so.
§                     To enter and search any premise in order to make such arrests.
Who will listen to these mourning children over their 11 year old brother shot dead by Indian troops

Keep in mind this is the protection given to Indian army under this act that Indian army has broken records of torture in occupied valley in last twenty years. Murder, rape, torture, murder after kidnapping people or any act against human rights can’t be complained or challenged in court. In past Indian and international human rights organizations are now tired of protesting against this draconian act. But the fresh acts of violence have forced them to protest again, but Indian govt. is not ready to listen to them.
Now let’s come towards the firing of Indian army over young children and youth. Here let me make clear that in current wave of protest against India Kashmiri children and youth are the top participants. They suddenly come out of streets, throw stones over Indian army and elope away in the streets. However Indian army is also not ready to lose any moment. They are targeting these children (which include children of 7 to 9 years) as they are Mujahideen.
A Kashmiri Women who is being given first aid after she got wounded in Indian forces Firing

On murder of innocent Kashmiri children the analyst of “South Asia Watch” calls it as ‘’s Gaza Strip’. In his analysis he addresses Delhi Govt. that participation of young children in protests is the proof that it has failed to convince Kashmiris to stay with . Whatever steps it has taken are the copy of British Rule to maintain its occupation of subcontinent.  Due to which the hate among Kashmiris is transferring to new generation violently. Moreover the use of army against them? What Indian govt. thinks? It can crush Kashmiris by using half century old methodology. Although has banned media in Kashmir but Kashmiris have succeeded making world look at as an occupant.
Today is helpless in such situation that he can not blame for the disturbance in . But it does not mean that even we do not give moral support to oppressed Kashmiris? If our free media just gives 30 minutes for and shows the world about the professionalism of Indian army which nothing more then assassins. It will be difficult for to prove itself as a democratic, secular country. Maybe in this is forced to lessen its torture on helpless Kashmiris. However whatever Indian policy is, we can’t stay silent on the murder of innocent Kashmiris children…
Fake Killings
Violence in Kashmir and Human rights